:
Recent advancements in high power light-emitting diode (LED) technology have presented greenhouse industry with a more efficient and flexible alternative light source for horticulture. However, the light distribution on the plant remains a challenge that has notable implications on the plant growth. A non-uniform light distribution on the canopy with hot spots is well-known to adversely affect the yield. Here, we present a technique to engineer the light wavefront of a solid-state source using a single-surface optics, which yields a highly uniform light distribution across the plant. This technique achieves over 90% illuminance uniformity, preserved at various distances from the source, for a cone of light with an up to 120° angular range. This work aids the paradigm shift towards LEDs as a competitive light source in horticulture.
Keywords:
horticulture lighting; LED grow-light; LED non-uniformity; uniform illumination; freeform lens

Haitz law [1], the analog of Moore’s law in the semiconductor industry, anticipates a twenty-fold increase in the output power and a ten-fold decline in the cost of LEDs every decade. This projection indicates that LEDs are poised to dominate the lighting industry as is already the case in several applications such as indoor lighting, street lighting, and display technology.
The greenhouse industry sorely requires a more efficient and more flexible alternative to high pressure sodium (HPS) light sources which could be met with high-power LEDs [2,3,4,5,6,7,8]. However, achieving an equivalent light intensity on plant canopy necessitates a large number of LEDs, yielding an LED grow-light panel economically not competitive with HPS sources [4,9]. Techniques for more efficient use of optical energy emitted by LEDs would certainly mitigate this challenge. In greenhouses, non-uniform lighting of LEDs results in either inadequate or excessive lighting at certain locations [10]. Increasing light intensity can boost plants’ growth and reproduction, however, excessive light level leads to growth saturation after a threshold point [11,12]. This issue gives rise to a suboptimal design of optical output power to ensure sufficient illumination throughout the plant canopies [12,13,14,15].
Freeform optics often uses one or more refractive surfaces to redirect the emitted light from a source to any desired illumination on the target plane [16,17,18]. The ray-mapping method involves calculating a mapping between the source and the target light distributions and constructing the freeform surface as a result [19]. Ray-mapping is the most straightforward and, in turn, the most common technique for designing freeform optics amongst others [20]. However, there is no implicit constrain in ray-mapping to enforce an integrable freeform surface solution, a condition required for the surface to be practically realizable [19]. Even if ray-mapping solutions yield an integrable solution, they can only achieve uniform illumination for a narrow light cone due to notable numerical errors in surface construction [16,19,21,22,23,24,25,26,27,28,29,30,31,32].
In this work, we present an alternative ray-mapping algorithm to design single surface freeform lenses. This technique yields highly uniform illumination using a physically realizable surface by enforcing integrability. In addition, eliminating construction errors makes this technique applicable to the sources with wide angular emission. Here, we experimentally report 90.4% uniformity for a 120° light cone.

Similar to all ray-mapping methods, this work relies on the energy conservation principle imposing the preservation of optical power emitted from a fixed light cone on the target plane [30,33]. Ray-mapping techniques determine a diffeomorphism of the source light distribution to a desired light distribution on the target plane (an imaginary far-field plane). A suitable ray-mapping needs to be integrable and outputs a smooth lens surface specially for non-paraxial or off-axis beams as non-smooth free-form lenses are either impossible or costly to fabricate [18,19,22,33]. Here, without loss of generality, we present a specific algorithm to transform a Lambertian point source (e.g., LED) irradiance into a circular uniform distribution.
A ray-mapping method generally entails two main steps: (1) the definition of a mapping, which associates each incident ray with a particular outgoing ray, and (2) the determination of the refracting surface, which yields such ray-mapping.
(1) To find the mapping, we assume a hypothetical plane (principal plane) at which all rays are bent to yield the desired illumination pattern on the plant canopy (target plane). The LED’s irradiance on the principal plane is proportional to the inverse fourth power of the distance each ray travels from the LED to the principal plane (since the LED emits a Lambertian beam perpendicular to the principal plane). Our technique divides the principal plane into N rings, each receiving an equal amount of light power. Due to the lower irradiance that the outer rings receive, their widths are increasingly wider (Figure 1). To make a uniform illumination on the target plane, the rays impinging on the principal plane need to be bent such that they strike the target plane on equally-thick rings (L). Crucially, the rings’ sequence must be preserved on both planes to impose integrability.
(2) Given the incident and outgoing rays’ positions and angles, the corresponding refractive surfaces can be determined at the principal plane. As an intermediate step, the required change in the lateral optical momentum at the principal plane is calculated. This change in lateral momentum alters the incident wavefront (red solid curve in Figure 2a) into the refracted wavefront (blue solid curve in Figure 2a), which differs from that otherwise resulted from free-space propagation (dotted red curve in Figure 2a). This procedure is known as wavefront tailoring. Explicitly, the optical path differences (OPDs) between the rays traversing from the incident wavefront to the refracted wavefront are calculated (purple curve in Figure 2b); then, the corresponding lateral momentum change required at the principal plane is determined (red curve in Figure 2b); finally, the refractive surface is found using Snell’s law.
Using the equation below, each ray’s free-space OPD can be calculated:
OPD = Lchief − Lsp − Lpt,
where Lchief, Lsp and Lpt correspond to chief ray (the shortest), source to principal plane, and principal plane to target optical path lengths, respectively. Figure 2a demonstrates the OPDs of some rays (purple lines).
The lateral momentum change (∆p) corresponds to the required bending of each ray on the principal plane’s cross-section, which can be calculated using the equation as follows:
The Figure 2b illustrates the OPD (purple curve) and its corresponding change in lateral momentum (red curve) along the x-axis on the principal plane.
The point-by-point calculation of lens surface given the bending angles is illustrated in Figure 3a. The construction of the lens surface begins from the initial point corresponding to the marginal ray (Figure 2a) which coincides with the principal plane that corresponds to the marginal ray (Figure 2a). The consecutive points are shifted along their incident ray such that the lens surface remains continuous (Figure 3a). The entire lens surface can be determined iteratively using this paradigm. The inner surface of the lens is a hemisphere to preserve the angle of incident rays from the source. This ray-mapping method, which satisfies the integrability yields a smooth manufacturable surface.
The lens material selected for this study was poly(methyl methacrylate) (PMMA), due to its excellent optical properties including low absorption and relatively consistent refractive index in the visible wavelength range. In addition, PMMA has desirable mechanical properties such as high temperature resistance, low thermal expansion, and low humidity absorption making it suitable for greenhouse lighting applications. The prototype lens was manufactured using CNC milling and polishing machine (OPS INGERSOLL (Burbach, Germany) EAGLE V9 5-AXIS), resulting in an arithmetic average roughness (Ra) of 20–30 nm.
The designed lens was computationally verified using ZEMAX (Kirkland, WA, USA) OpticStudio software, considering a specific LED emission profile (OSRAM (Premstätten, Austria) OSLON® Square, GH CSSRM4.24). In this simulation, the target plane is a square-shaped area of located 25 cm from the source, perpendicular and centered to the optical axis. The detector plane (target plane) resolution is 200 by 200, and the lens refractive index is assumed to be 1.4880 (PMMA @660 nm). Analyzing the results and calculating the uniformity and power in the specified target plane were carried out using MATLAB.
To experimentally demonstrate the lens performance, we utilized a setup comprised of a photo-detector (Thorlabs (Newton, MA, USA) PDA36A) mounted on a 2-dimensional translation stage capable of scanning the entire target plane (Figure 4). The setup continuously scans a 1 m-by-1 m square-shaped target plane using two stepper motors.

The greenhouse industry demands more uniform lighting systems to maximize the plants’ yield. This work introduces a simple algorithm to design a single refractive surface that uniformly distributes the light intensity emitted by wide angle commercial LEDs. This algorithm enforces the surface integrability, finds the lateral optical momentum change at the principal plane, and determines a refracting surface which realizes the desired mapping. This ray-mapping algorithm is general and can be utilized for designing illumination systems with different shapes and different lens types. Using this method increases of the light distribution uniformity from 11.2% to over 90%, enabling more efficient lighting and potentially higher growth yield.

This research was funded by Natural Sciences and Engineering Research Council (NSERC) of Canada, grant number 392075 and MITACS, grant number IT17040.

Upon a reasonable request, the corresponding author can provide you with the data supporting the plots in this article and other findings of the study.

M. Pahlevani Thanks Genoptic LED Inc. for providing financial support for this project. 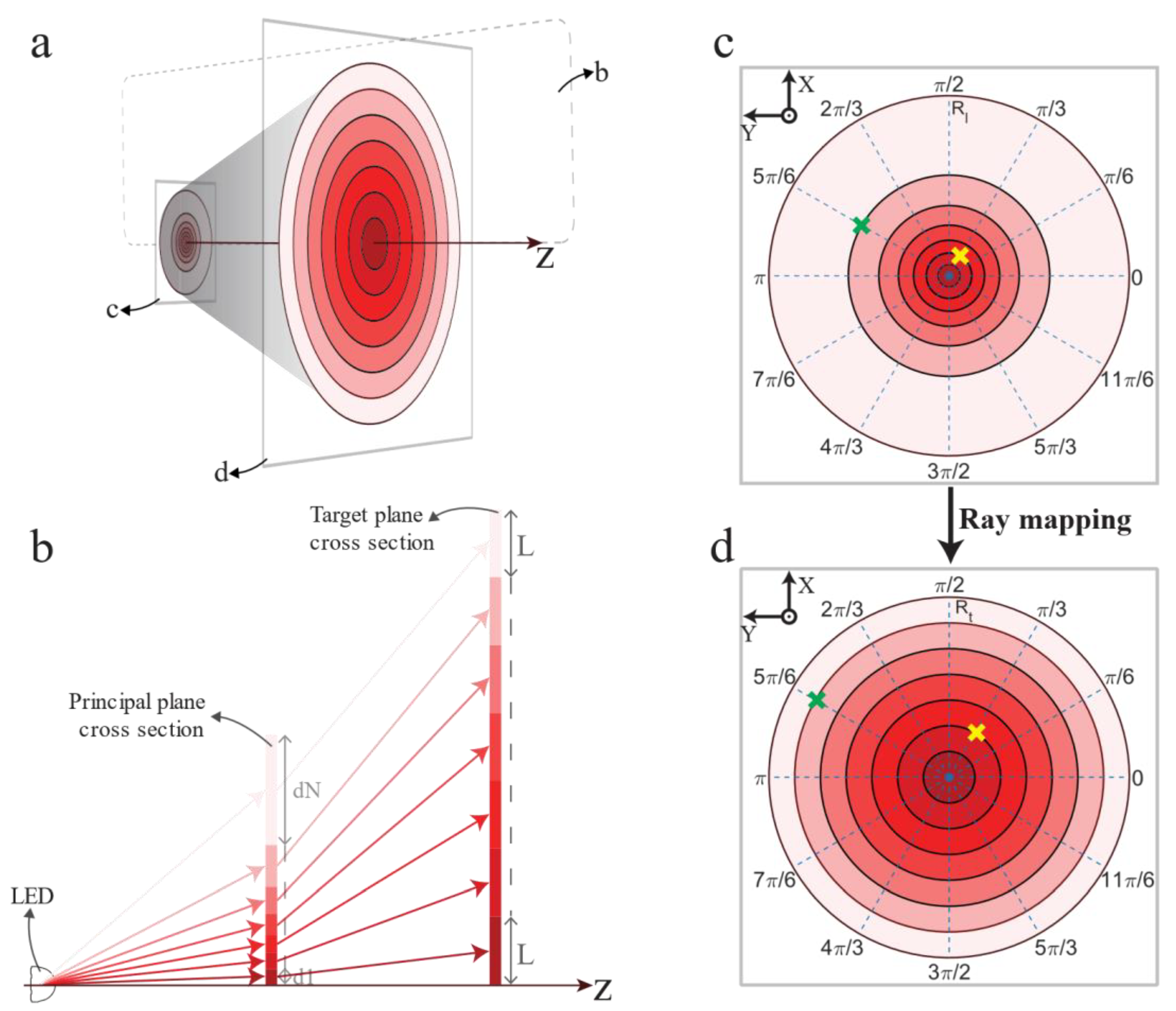 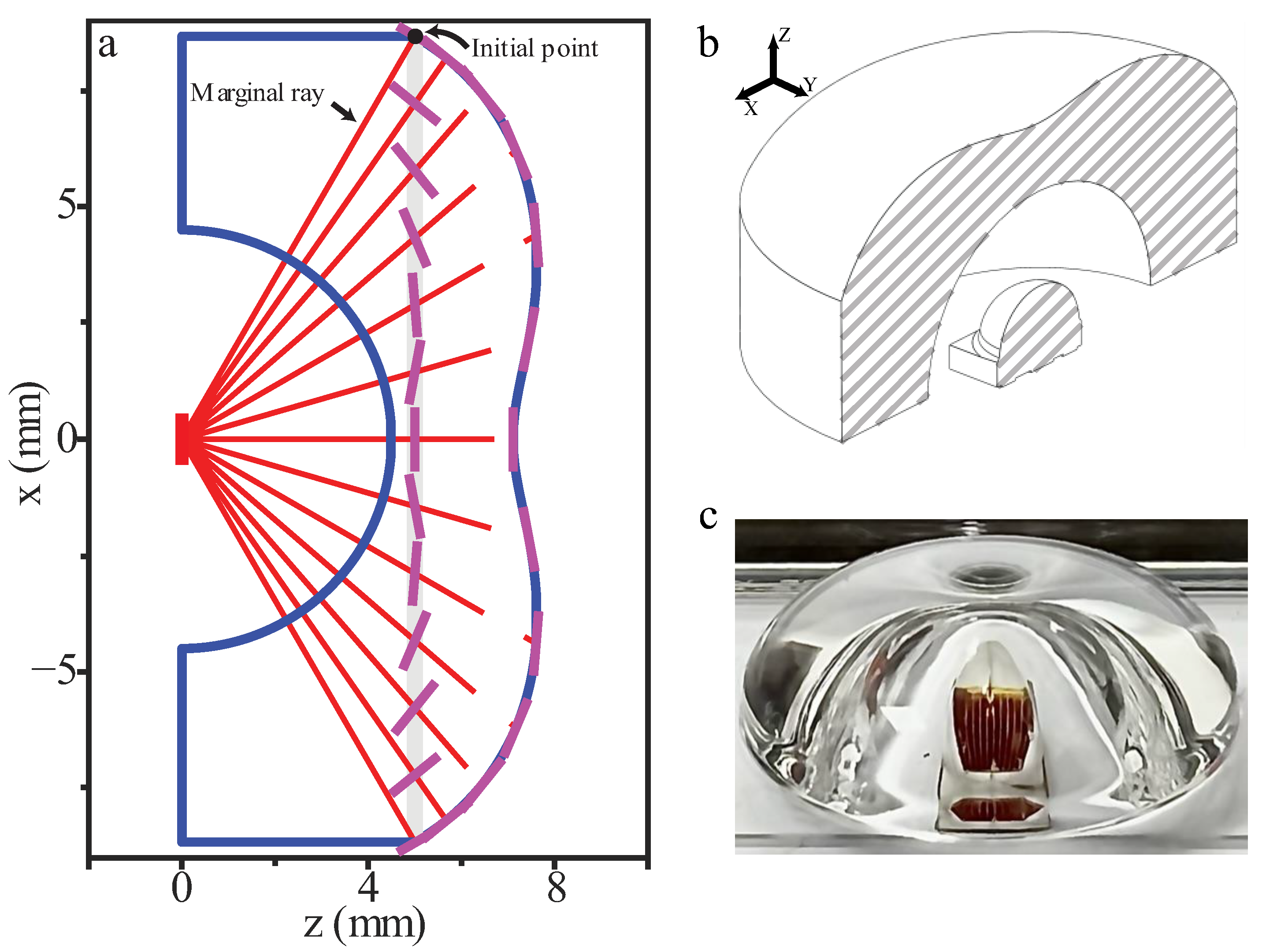 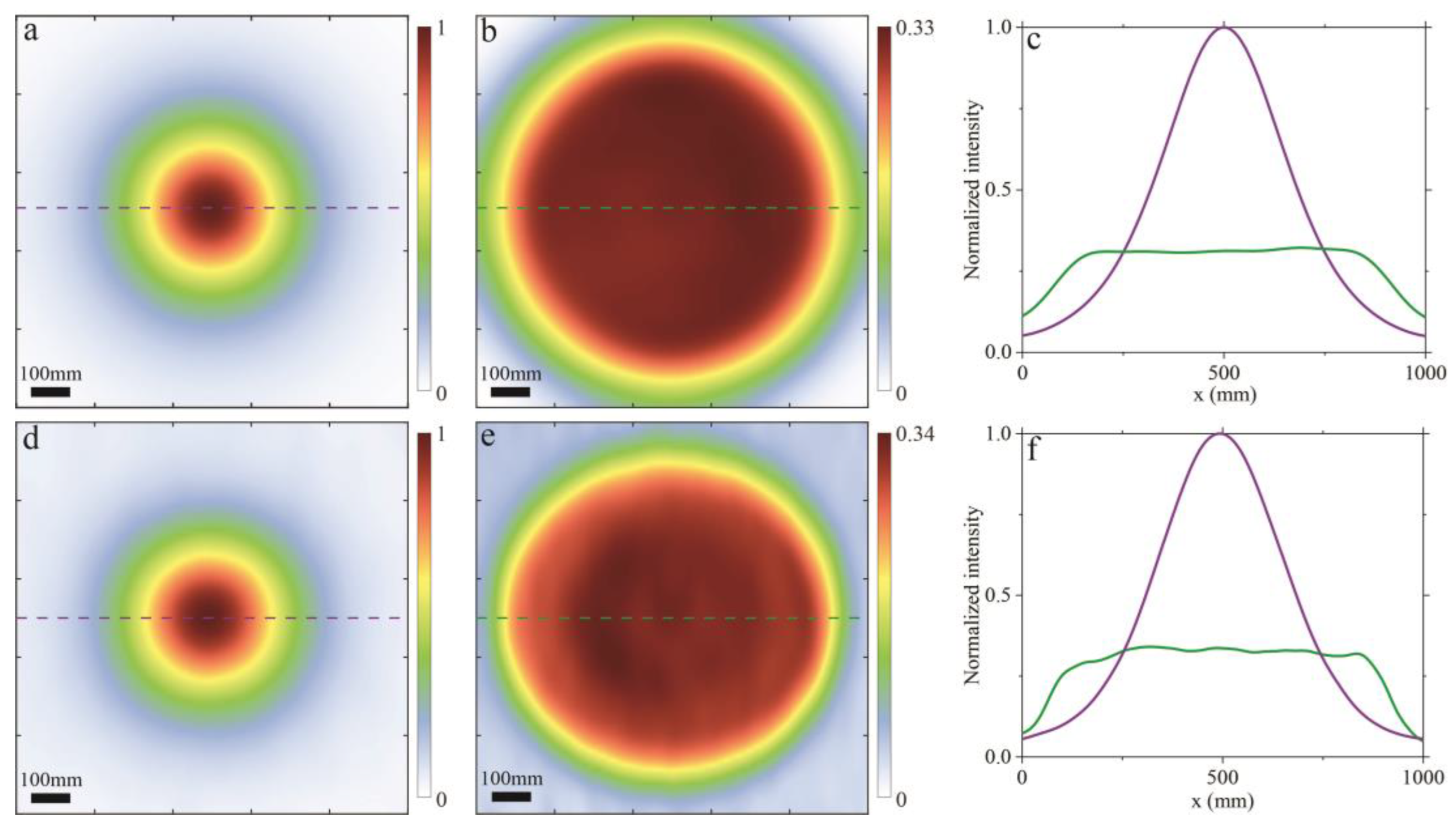