Cold Stress in Citrus: A Molecular, Physiological and Biochemical Perspective

This work compares the tolerance to long-term anoxia conditions (35 days) of five new citrus ‘King’ mandarin (Citrus nobilis L. Lour) × Poncirus trifoliata ((L.) Raf.) hybrids (named 0501XX) and Carrizo citrange (CC, Citrus sinensis (L.) Osb. × Poncirus trifoliata (L.) Raf.), the widely used citrus rootstock in Spain. Growth parameters, chlorophyll concentration, gas exchange and fluorescence parameters, water relations in leaves, abscisic acid (ABA) concentration, and PIP1 and PIP2 gene expressions were assessed. With a waterlogging treatment, the root system biomass of most hybrids went down, and the chlorophyll a and b concentrations substantially dropped. The net CO2 assimilation rates (An) and stomatal conductance (gs) lowered significantly due to flooding, and the transpiration rate (E) closely paralleled the changes in gs. The leaf water and osmotic potentials significantly increased in most 0501 hybrids. As a trend, flooding stress lowered the ABA concentration in roots from most hybrids, but increased in the leaves of CC, 05019 and 050110. Under the control treatment (Ct) conditions, most 0501 hybrids showed higher PIP1 and PIP2 expressions than the control rootstock CC, but were impaired due to the flooding conditions in 05019 and 050110. From this study, we conclude that 0501 genotypes develop some adaptive responses in plants against flooding stress such as (1) stomata closure to prevent water loss likely mediated by ABA levels, and (2) enhanced water and osmotic potentials and the downregulation of those genes regulating aquaporin channels to maintain water relations in plants. Although these traits seemed especially relevant in hybrids 050110 and 050125, further experiments must be done to determine their behavior under field conditions, particularly their influence on commercial varieties and their suitability as flooding-tolerant hybrids for replacing CC, one of the main genotypes that is widely used as a citrus rootstock in Spain, under these conditions. View Full-Text
Keywords: ABA; chlorophyll concentration; Citrus hybrids; fluorescence; gas exchange parameters; osmotic potential; PIPs; water potential; waterlogging ABA; chlorophyll concentration; Citrus hybrids; fluorescence; gas exchange parameters; osmotic potential; PIPs; water potential; waterlogging
►▼ Show Figures 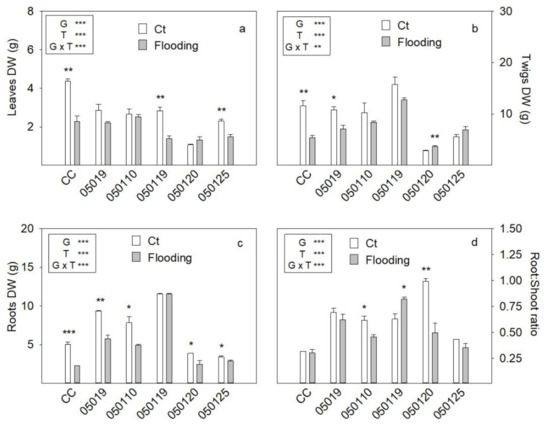