Identification of Yeasts with Mass Spectrometry during Wine Production

Short-chain prebiotic fructo-oligosaccharides (FOS) produced by enzymatic conversion from sucrose often contains high concentration of monosaccharides as byproducts. In addition to conventional physical/chemical purification processes, microbial treatment is an alternative method to remove these byproducts. We used Bacillus coagulans to reduce the abundance of byproducts during the enzymatic production of FOS. It is a promising probiotic because this thermophilic and spore-forming bacterium remains viable and stable during food processing and storage. B. coagulans also produces lactic acid during the carbohydrate metabolism and is used industrially to produce lactic acid for medical and food/feed applications. We aimed to establish an evaluation system to screen different strains of B. coagulans for their performance and selected B. coagulans Thorne for the treatment of crude FOS due to its high growth rate, high sporulation rate, and low nutrient requirements. B. coagulans preferentially utilized monosaccharides over other sugar components of the FOS mixture. Glucose and fructose were completely consumed during the fermentation but 85% (w/w) of the total FOS remained. At the end of the fermentation, the total viable cell count of B. coagulans Thorne was 9.9 × 108 cfu·mL−1 and the maximum endospore count was 2.42 × 104 cfu·mL−1. View Full-Text
Keywords: oligosaccharide; prebiotic; sugar metabolism; sporulation; FOS purification; synbiotic oligosaccharide; prebiotic; sugar metabolism; sporulation; FOS purification; synbiotic
►▼ Show Figures 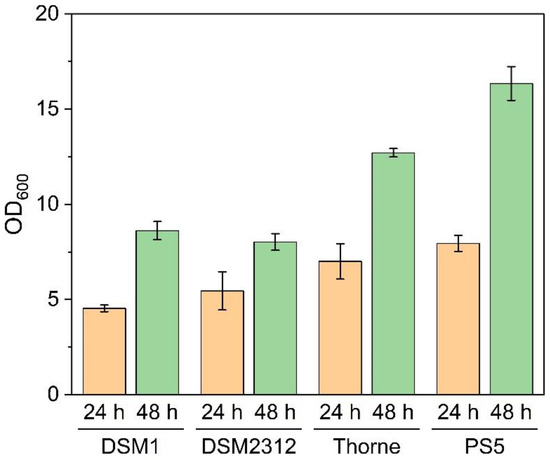