The State of HiPco Single-Walled Carbon Nanotubes in 2019

High-pressure carbon monoxide (HiPco)-synthesized single-walled carbon nanotubes (SWCNTs) have been a widely studied carbon nanomaterial for nearly two decades. It has been the de facto standard for SWCNT research, be it functionalization, separation and purification, or composites, as a result of the consistent, high-quality material that was made available at an affordable price to researchers worldwide. The recent shutdown of the HiPco reactor at Rice University has resulted in a scarcity of HiPco material available to the research community, and a new source of similar SWCNTs is desperately needed. Continued research and development on the design, materials used, and the overall process have led to a new HiPco material, referred to as NoPo HiPCO®, as an alternative to the erstwhile Rice HiPco SWCNTs. In this work, we have compared the two HiPco materials, and aim to provide more clarity for researchers globally on the state of HiPco SWCNTs for research and applications alike in 2019.
Keywords: carbon; carbon nanotube; HiPco; NoPo HiPCO®; SWCNT carbon; carbon nanotube; HiPco; NoPo HiPCO®; SWCNT

Carbon nanotubes have been at the forefront of materials research for the better part of three decades now, with single-walled carbon nanotubes (SWCNTs) taking precedence over their multi-walled variants. Indeed, a major part of this interest has been due to the unique electronic properties possessed by SWCNTs, dictated by the chirality of the individual carbon nanotube [1,2], that has led to potential applications including solar power [3], fuel cells [4], water filtration [5], and thin-film transistors [6]. As-synthesized SWCNTs have also been further analyzed via various methods of separation to develop enriched ensembles of metallic- and semiconducting-SWCNTs [7], to further facilitate research and a move from the lab to the retail market. Synthesis of SWCNTs has thus always been key in progressing this field of research, with various techniques having been developed for this, including arc discharge [8,9], laser ablation [10,11], and chemical vapor deposition (CVD) [12,13,14].
All three of these processes have been successfully used for commercial SWCNT synthesis; however, CVD offers the most control over the final product when it comes to chirality and diameter alike. One specific approach of the CVD process was the high-pressure carbon monoxide (HiPco) gas-phase synthesis of SWCNTs developed at Rice University in Houston, TX in the early 2000s [15]. This method, resulting in the catalytic production of SWCNTs via the decomposition of Fe(CO)5 in the presence of a continuous flow of carbon monoxide at high temperature and pressure, has been synonymous with SWCNT research due to the university providing a stable, inexpensive supply of consistent, high-quality SWCNTs for researchers and companies around the world.
HiPco SWCNTs continue to be the de-factor standard even in 2019; however, things are quickly turning as a result of the reactor, associated IP, and all remaining stock of HiPco SWCNTs being sold by Rice University to Atom OptoElectronics, Inc. [16] as the sole-supplier of the remaining materials (at $899/g compared to the $150–250 when available directly from Rice University). The expiration of the core patents for the HiPco process combined with a typical 25–30 wt% residual metal catalyst impurity [17], create the potential for a new source of less expensive, high-quality HiPco SWCNTs available globally.
Erstwhile members of the Smalley group at Rice University, which developed the original HiPco process, helped create a new entity (NoPo Nanotechnologies, India), which aims to update the HiPco process using information developed over the last decade, and produce what they call NoPo HiPCO® SWCNTs, which are herein termed NoPo HiPco SWCNTs for consistency of naming. Since variability in SWCNT sources can make a change in research results (due to catalyst residue content, diameter and chirality distribution, and length), making back-to-back comparisons between batches is critical for researchers to obtain reproducible results, it is in the interest to all researchers to understand how the presently available NoPo HiPco SWCNTs compare to historically available Rice HiPco SWCNTs that have been the subject of a great range of academic studies. Here, we report a detailed comparison of the two HiPco materials to provide a baseline for researchers.

Raw HiPco SWCNTs were obtained from Atom Optoelectronics, Inc. (HPR 194.3, formerly a collective batch synthesized at Rice University, Houston, TX, USA) and used as such without further modification. A sample set of NoPo HiPco SWCNTs (Batch Dec 2017) was provided by NoPo Nanotechnologies India (Bangalore, Karnataka, India) and used as such without further modification. All SWCNT nanomaterials were handled in a safe manner as described previously [18].

The modified NoPo HiPco reactor was designed to be the first all-metal HiPco reactor (the reaction zone is also made of metals), which operates at a high pressure (30–50 atm) and temperature (900–1100 °C). Carbon monoxide was used as the carbon source for the process. Iron and/or nickel carbonyl was used as the catalyst precursor such that, when the catalyst is introduced to the high temperature, it starts to decompose and forms the metal catalyst particles. The metal catalyst acts as the SWCNT seed via the Boudouard reaction, which led to the growth of nanotubes via disproportionation [19].
Since both the catalyst and source are in the gas phase, the reactor can be run continuously for long periods of time, which helps in industrial scale production on the order of 0.5 g-SWCNT/hour/reactor, with scaling coming in the form of multiple such reactors running in parallel as needed.

While the two HiPco SWCNT samples were characterized as-is in solid form, knowing the chiral distribution of the SWCNTs without the CNT bundles, amorphous carbon, and residual catalyst interference is also of critical importance in the scope of this work. As such, surfactant-stabilized aqueous dispersions of both were prepared using a previously described method [7]. Specifically, 20 mg of each of the two SWCNT samples was separately dispersed in a 2 wt% SDS aqueous solution (20 mL) at an initial SWCNT concentration of 1 g—SWCNT/L—solution. Bath sonication using a Cole-Palmer (Vernon Hills, IL, USA) 60W ultrasonic cleaner (Model #08849-00) for 30 min was followed by probe sonication for 2 h using a Cole-Palmer 500 W ultrasonic processor (Model #CPX-600, ¼” probe, 35% amplitude) at a water bath temperature of 15 °C. A sample of the resulting suspension (10 mL) was ultracentrifuged in a PN 7030 centrifuge tube from Seton Scientific for 2 h at 208,400 G (average) using a Sorvall Discovery 100SE ultracentrifuge (now part of ThermoFisher Scientific, MA, USA) with a TH-641 swinging-bucket-type titanium rotor, which removed large SWCNT bundles and SWCNT impurities. The upper 7.5 mL of the supernatant was used as the stock SWCNT suspension for characterization.

Atomic force microscopy was conducted on the as-produced HiPco SWCNT samples using a Bruker Multimode 8 in tapping mode (semi-contact). The samples were dispersed on a piece of plasma-etched silica (WaferWorld, FL, USA), and several 2 × 2 um scans were conducted with height analysis performed using Nanoscope Analysis version 1.50 for a statistical measurement of CNT diameter using a minimum of 500 individual CNTs per sample. The samples were then deposited onto C-Flat™ carbon grids (Electron Microscopy Sciences, Inc., Hatfield, Pennsylvania) by making physical contact at a random point in the carbon nanomaterial, and imaged using a cold cathode JEOL (Peabody, MA, USA) 2100F TEM operated at 200 KV. Scanning electron microscopy (SEM) energy-dispersive X-ray spectra (EDS) were collected using an FEI Quanta 400 ESEM (now part of ThermoFisher Scientific, MA, USA) equipped with an EDAX™ spectrometer. Elemental quantification was obtained using the ZAF (standard-less) method available in the EDAX Genesis™ application. Thermogravimetric analysis (TGA) was conducted on a TA Instrument SDT Q600 (MA, USA). The samples (5 mg each) were run in an open alumina crucible under continuous air flow of 50 mL/min with a heating ramp rate of 10 °C/min from room temperature (25 °C) to 800 °C. Raman spectra were collected using a Renishaw inVia™ Raman microscope (Wotton-under-Edge, UK) equipped with 514, 633, and 785 nm lasers and a Leica (Leica Microsystems, Buffalo Grove, IL, USA) PL Fluortar L50 × 0.55 long working distance objective lens. Raman laser excitation powers were determined by increasing laser irradiance until the spectral transition from baseline noise to a weak signal-to-noise ratio of ~3 at ca. 1600 cm−1 Raman shift was observed. The as-produced samples were placed on a transparent microscopy glass slide, and at least three measurements were performed for each distinct sample at room temperature and atmospheric pressure, with an exposure time of 60 s with each measurement collected across 15 accumulations in a spectral range of 100–3200 cm−1. UV-vis-NIR absorption spectroscopy of the liquid dispersion samples was performed using a Shimadzu UV-3101PC double-beam-scanning spectrophotometer (Houston, TX, USA) in the range of 400–1350 nm with 1 nm interval and a quartz cuvette (10 mm path length).

A back-to-back analysis of typical Rice University and NoPo HiPco SWCNT samples has been performed using AFM, TEM, SEM/EDS, Raman spectroscopy, and UV-vis-NIR spectrometer. Although the samples are similar, the NoPo sample comprised smaller average diameter SWCNTs, lower catalyst content, and lower amorphous carbon content. Furthermore, the Raman IG/ID ratio suggested that NoPo samples have fewer defects overall for the smaller-diameter metallic-SWCNTs. The overall result is that, as far as the further use or functionalization of NoPo SWCNTs in comparison to previously published work with Rice HiPco SWCNTs, the former represents a suitable replacement for the latter.

V.S.G. performed the majority of the characterization and wrote the manuscript. M.A.G., G.R., and R.K.B. helped provide information about the operation of the NoPo reactor and their HiPco SWCNT products and reviewed the manuscript. A.R.B. provided guidance to the experiments and helped write the manuscript.

This work was funded by the Office of Naval Research (N00014-2717), and the Welsh Government Sêr Cymru National Research Network in Advanced Engineering and Materials (NRN-150).

V.S.G. and A.R.B. declare no conflict of interest, while M.A.G., G.R., and R.K.B. declare their employment with NoPo Nanotechnologies India Private Limited, India. The founding sponsors had no role in the design of the study; in the collection, analyses, or interpretation of data; in the writing of the manuscript, and in the decision to publish the results”. 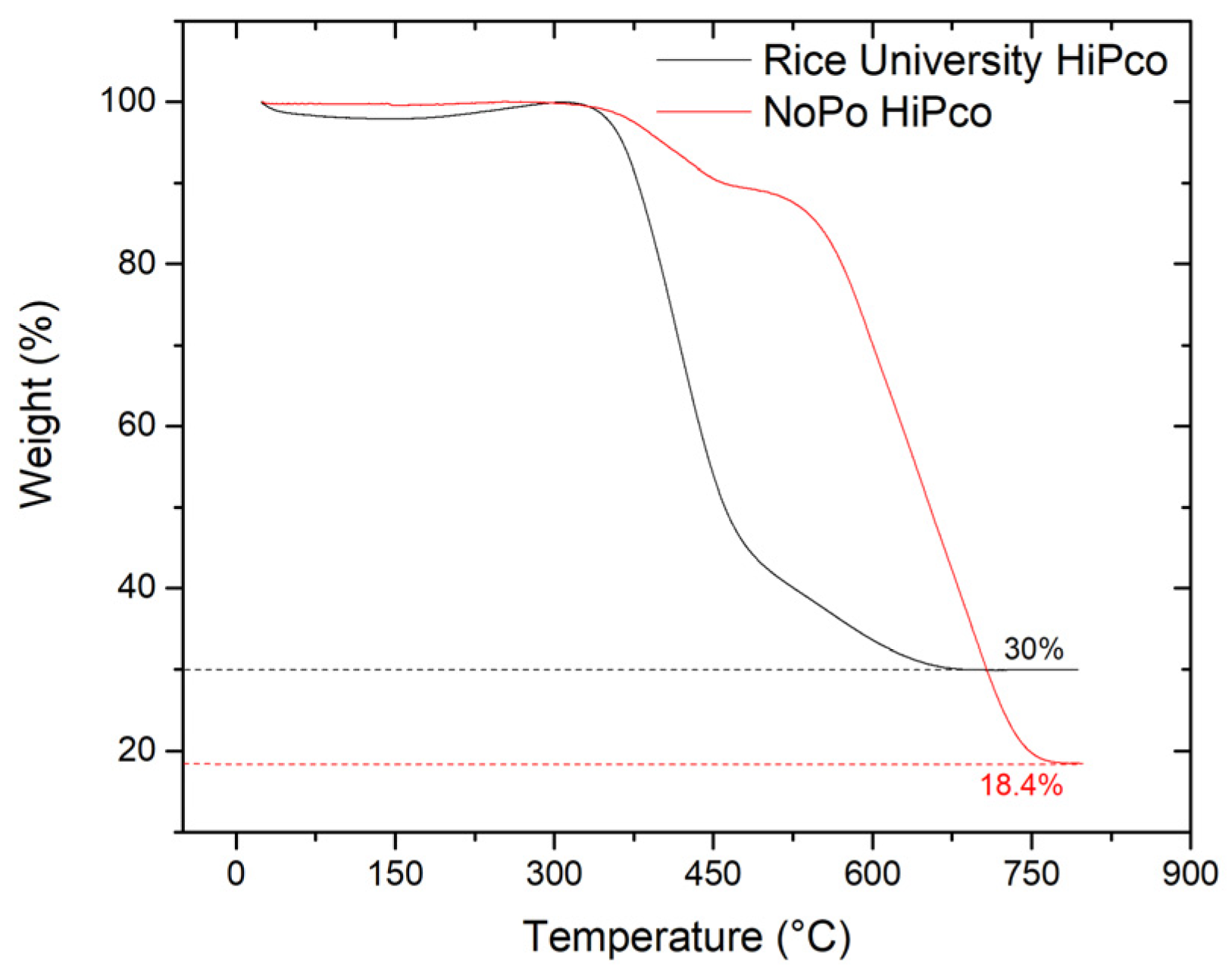 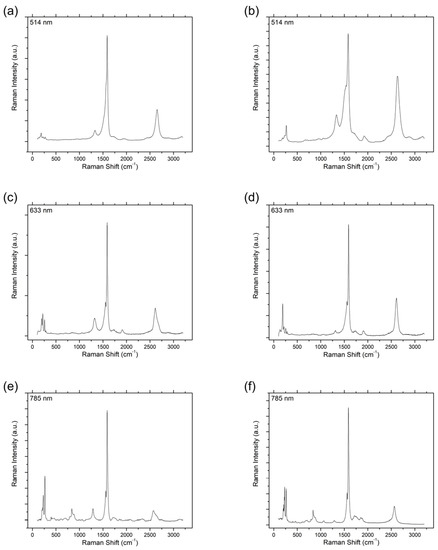 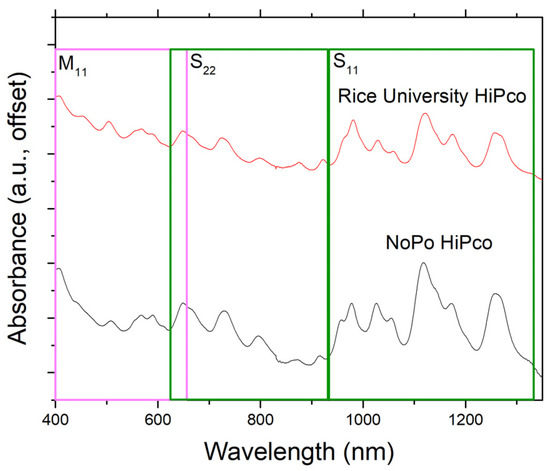 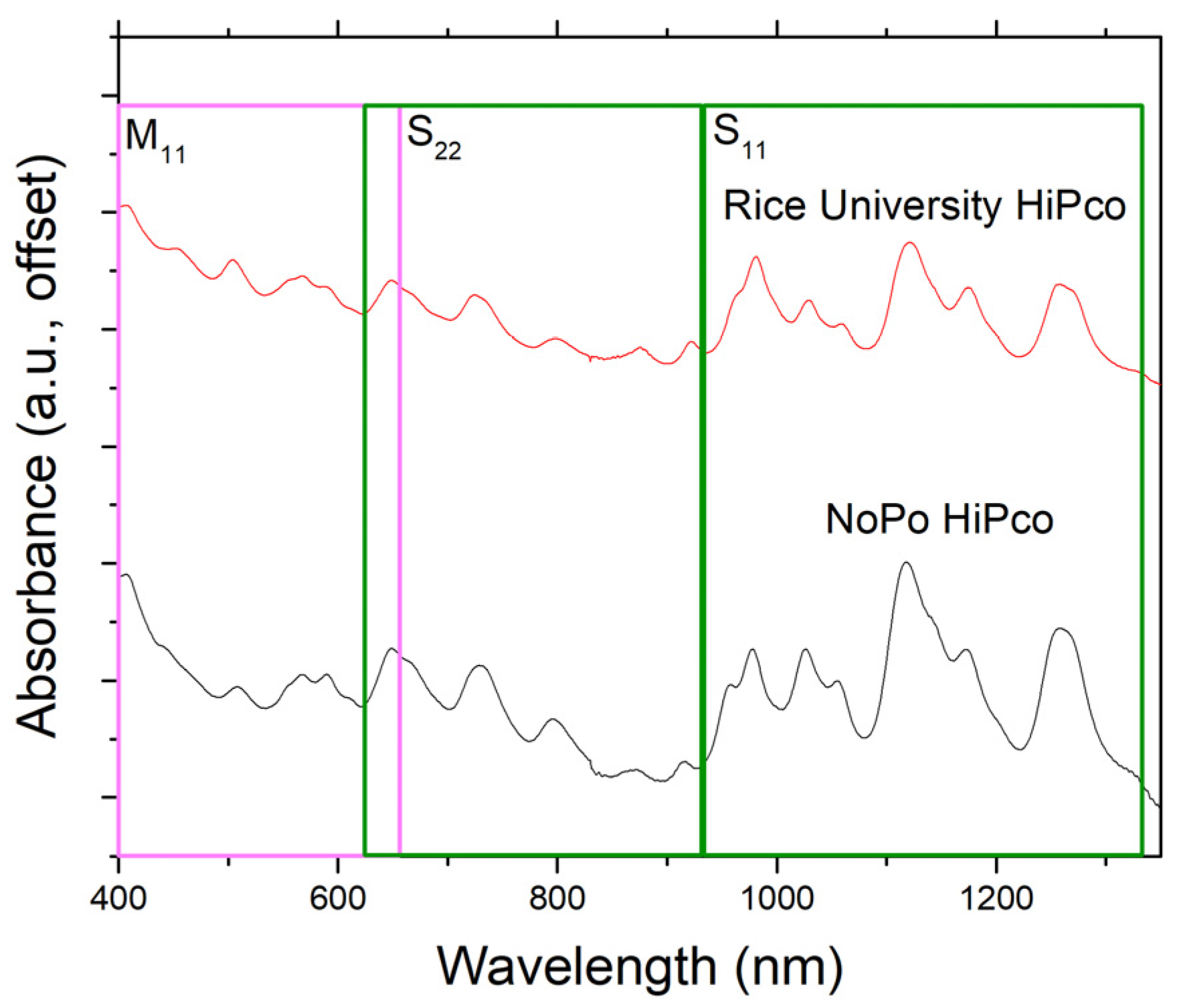