Allergic fungal rhinosinusitis (AFRS) is a unique variety of chronic polypoid rhinosinusitis usually in atopic individuals, characterized by presence of eosinophilic mucin and fungal hyphae in paranasal sinuses without invasion into surrounding mucosa. It has emerged as an important disease involving a large population across the world with geographic variation in incidence and epidemiology. The disease is surrounded by controversies regarding its definition and etiopathogenesis. A working group on “Fungal Sinusitis” under the International Society for Human and Animal Mycology (ISHAM) addressed some of those issues, but many questions remain unanswered. The descriptions of “eosinophilic fungal rhinosinusitis” (EFRS), “eosinophilic mucin rhinosinusitis” (EMRS) and mucosal invasion by hyphae in few patients have increased the problem to delineate the disease. Various hypotheses exist for etiopathogenesis of AFRS with considerable overlap, though recent extensive studies have made certain in depth understanding. The diagnosis of AFRS is a multi-disciplinary approach including the imaging, histopathology, mycology and immunological investigations. Though there is no uniform management protocol for AFRS, surgical clearing of the sinuses with steroid therapy are commonly practiced. The role of antifungal agents, leukotriene antagonists and immunomodulators is still questionable. The present review covers the controversies, recent advances in pathogenesis, diagnosis, and management of AFRS. View Full-Text
Keywords: fungal sinusitis; allergy; Aspergillus; dematiaceous fungi; epidemiology; pathogenesis; diagnosis; management fungal sinusitis; allergy; Aspergillus; dematiaceous fungi; epidemiology; pathogenesis; diagnosis; management
►▼ Show Figures 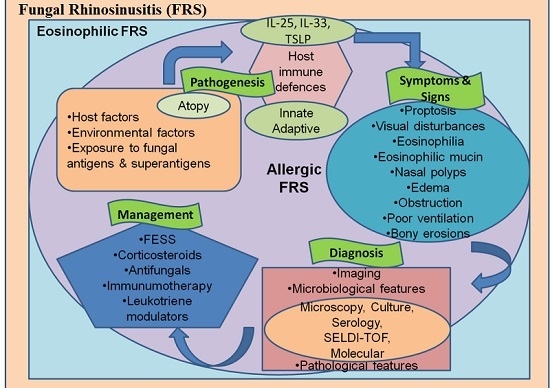