Geriatric Oncology in Portugal: Where We Are and What Comes Next—A Survey of Healthcare Professionals
Next Article in Special Issue

Comparison of Physical Function among Elderly Japanese Women with and without Low Bone Mass and Low Muscle Mass: A Cross-Sectional Study of Older Women Who Engage in Regular Physical Activity
Previous Article in Journal

Frailty as a Predictor of Hospitalization and Low Quality of Life in Geriatric Patients at an Internal Medicine Outpatient Clinic: A Cross-Sectional Study
Previous Article in Special Issue

:
Gender equality, with an emphasis on female education, has been designated by the United Nations as one of the 17 Sustainable Development Goals (SDGs) to be completed by 2030, since gender disparity is a major impediment to scientific and economic progress. This study was carried out in an effort to address the gender gaps that can be seen in academic and scientific publications. The purpose of this study is to describe the gender distribution of editorial board members and editors-in-chief across geriatrics journals with high impact factors. Clarivate Journal Citation Reports (JCR) 2021 were used to guide the selection of geriatric and gerontology journals utilizing Scopus All Science Journal Classification Codes. The genders of the editors-in-chief and editorial board members were determined and analyzed using publicly accessible data. A total of 47 geriatric journals with an average impact factor of 4.27 were examined. Of the 65 editors-in-chief, 21 (32%) were women, whereas 876 female editorial members were found out of a total of 2414, which constitutes 36% in total. Despite making up 60% of the geriatric medical workforce, women are still underrepresented on editorial boards and as chief editors in well-known geriatric periodicals.
Keywords:
geriatrics; women in geriatrics; gender disparity

More women than ever before have pursued the professions of science, technology, engineering, and mathematics during the past 50 years (STEM) [1]. Women now make up 49% of all medical students, up from 6% in 1960 [2]. However, according to data from the UNESCO Institute for Statistics (UIS), women still comprise fewer than 30% of researchers globally [1]. This suggests that they have not achieved the same advancements in research [1,3]. Despite the fact that the proportion of female first and senior authors significantly increased from 5.9 and 3.7%, respectively, in 1970 to 29.3 and 19.3%, respectively, in 2004, the total proportion of women remains low and has even plateaued in recent years [3].
There are more women practicing geriatric medicine than men. Currently, women make up about 60% of American Society of Geriatrics (AGS) members, 66% of AGS committee members, and 56% of the Board of Directors. [4]. Consistent with AGS membership trends, the ratio of female presidents also increased to 70% from 2009 to 2019 [4]. These results are promising, demonstrating an important surge in female representation as both practicing geriatricians and leaders in the field.
The significance of equitable gender representation in the medical sciences is emphasized by the links between gender equality in STEM and increased scientific innovation, economic growth, lower patient mortality, and improved health outcomes [1]. The measurement of women’s scholarly engagement as indicated by “authorship” in scientific publications serves as an easily accessible and objective indication of the effective integration of women in science [5]. Scientific authorship and the participation of females on editorial boards in journals reflect both their intellectual contributions and the hierarchical structures of the research community, and it is a crucial component that sheds light on the degree of the gender gap and thus serves as a proxy to identify gender discrepancies in research.
Despite recent publications analyzing the gender distributions in other medical specialties such as family medicine, gastroenterology, and orthopedic surgery, a systematic cross-sectional study of the gender proportions among editorial board members and manuscript authors in geriatric academic journals is still lacking [1,6,7]. The purpose of this study was to determine if the increased representation of women in the American Geriatric Society extends to academic and research settings.

Using the Clarivate Journal Citation Reports (JCR) 2021, we selected all the journals in the field of Geriatrics and Gerontology by using Scopus All Science Journal Classification Codes [8,9]. A third-party rating system called JCR evaluates journals on a worldwide scale using a range of different measures and indicators. We found 52 Geriatrics and Gerontology journals in total [9]. In order to identify the gender distribution among editorial board members and editors-in-chief, we looked through the online archives of each of these publications. The variables, the nation in which the journal is headquartered, and the journal’s impact factor were also collected.
For this study, gender was divided into male and female categories. We identified individual genders using publicly accessible information from academic websites and social media. When there was uncertainty or a lack of information, we used a globally recognized database called Genderize.io (https://genderize.io/ accessed on 25 March 2022) to make gender predictions using a >95% probability criterion [10].
For gender-neutral names or names for which we could not easily determine gender, we searched online for people with the exact same first name and then classified gender based on these results. To guarantee the reliability, the data were gathered by two separate investigators, and any inconsistencies were resolved by a third investigator. We were unable to obtain information on the editorial board members of five journals that were eliminated from the investigation, and a total of 47 journal data were included in the final analysis.
In both of our interest groups, we analyzed the total number of men and women, including editorial board members and the chief editor. Descriptive analysis, such as determining the total number of male and female editorial board members and editors-in-chief, was carried out. The additional analysis includes creating pivot tables in the excel sheet in order to highlight various relationships. Moreover, the number of editors-in-chief who are men and women, divided into Europe and North America, was determined using pivot tables. This was followed by a study of the relationship between male editors-in-chief and the percentage of male and female editorial board members. We also searched for any connections between the impact factor of the journals and the gender distribution of editors-in-chief. Supplementary Tables S2–S7 show additional details. 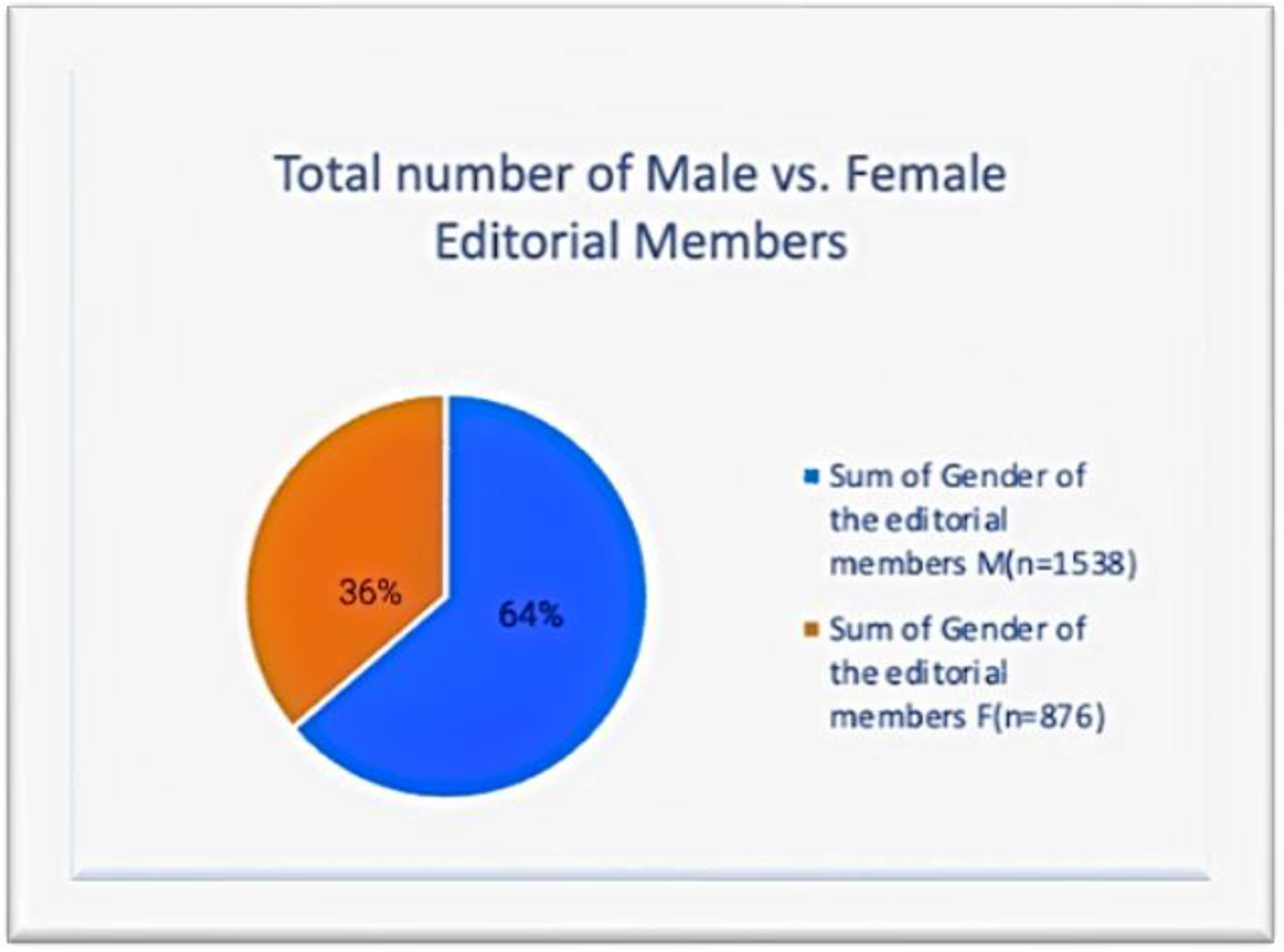