Pneumonia: Does Age or Gender Relate to the Presence of an SLP Dysphagia Consultation?

According to the International Classification of Functioning, Disability and Health (ICF), swallowing is classified as “functions of clearing substances, such as food, drink or saliva through the oral cavity, pharynx and esophagus into the stomach at an appropriate rate and speed” (b5105) and eating as “carrying out the coordinated tasks and actions of eating food that has been served, bringing it to the mouth and consuming it in culturally acceptable ways, cutting or breaking food into pieces, opening bottles and cans, using eating implements, having meals, feasting or dining” (d550) [1]. Swallowing and eating difficulties, the focus of this study, describe challenges in meeting these basic needs. Swallowing and eating difficulties include dysphagia, which is defined as a geriatric syndrome [2]. However, the ability to swallow and eat efficiently and securely depends not only on the presence or absence of dysphagia. Other prerequisites are the ability to adopt and maintain a good sitting position, the ability to handle the food on the plate and transport it to the mouth, the ability to manipulate the food in the mouth, and having enough energy to eat a complete meal [3,4].
Dysphagia and eating difficulties have been reported to be highly prevalent among the elderly [2,4,5,6,7,8,9,10,11]. As a result of the normal aging process, anatomical and physiological changes occur to the swallowing- and eating-related structures, such as muscular weakness in the throat, osteoporotic fractures in the neck, and sensibility disturbances [11,12,13,14,15,16,17,18]. The consequences of dysphagia are malnutrition, dehydration, aspiration, pneumonia, frailty, reduced quality of life, depression, social withdrawal, and mortality [8,11,18,19,20,21,22,23]. Economically, the consequences are also high, given the fact that people with dysphagia are hospitalized and re-hospitalized more often and have an increased hospital length of stay compared to people without these difficulties [8,21,24,25].
Due to the progressive aging of the population, the incidence of hip fracture is continuing to rise worldwide [26]. In the year 2000, the worldwide incidence of hip fracture was estimated to be more than 1.6 million [27], and the global number of hip fractures is expected to rise to 4.5 million by the year 2050 [26]. The risk of dying increases after hip fracture; mortality has been reported to range from 7.5% to 13.3% 30 days/1 month following surgery [28,29,30,31] and from 8.4% to 36% one year after the operation [28,32,33,34]. Furthermore, re-hospitalization within 28–30 days after being discharged has been reported to range from 8.3% to 11.9% [35,36,37]. Early re-hospitalization after hip fracture surgery is often caused by pneumonia, dehydration, and loss of functional capacity [36]. It is previously found that pneumonia due to aspiration, dehydration, reduced functional capacity, increased risk of re-hospitalization, and increased mortality is closely related to dysphagia [2,8,11,21,22].
Patients operated for hip fracture are characterized by several factors previously found to be associated with different kinds of swallowing and eating difficulties, including high age and a high degree of comorbidity and need of care [11,26,38]. Despite this, only a few studies have focused on swallowing and eating difficulties in an elderly postoperative hip fracture population. We found four studies focusing on dysphagia. These studies documented a prevalence of dysphagia of 5.3–54% for patients ≥65 years operated for hip fracture [39,40,41,42]. To our knowledge, no studies have previously focused on swallowing and eating difficulties in a broader perspective in an elderly postoperative hip fracture population.
The primary aim of this study was to investigate the prevalence of swallowing and eating difficulties in an elderly postoperative hip fracture population and secondly to identify factors associated with swallowing and eating difficulties.

A clinical swallowing and eating assessment was conducted by an experienced occupational therapist postoperatively. The Danish versions of the standardized tools Volume-Viscosity Swallow Test (V-VST) [43,44,45] and Minimal Eating Observation Form-version II (MEOF-II) [3,4,46] were used.
In V-VST, three different viscosities are used in three different volumes (5, 10, and 20 mL). The bolus viscosity was liquid viscosity (21.61 mPa.s), nectar viscosity (295.02 mPa.s) achieved by adding 1.2 g of the thickener Resource ThickenUp (Nestlé HealthCare Nutrition) to 100 mL water, and pudding viscosity (3682.21 mPa.s) achieved by adding 6.0 g of the thickener Resource ThickenUp to 100 mL water. Water at room temperature was used. Boluses of each volume and viscosity were offered to the patient with a disposable syringe. Oxygen saturation was measured before and during the test using a pulse oximeter on the patient’s index finger. V-VST assesses dysfunction in swallowing regarding effectivity and safety. According to the test, signs of impaired effectivity are impaired labial seal, oral or pharyngeal residue, and/or incomplete sinking. Signs of impaired safety are changes of voice quality, cough, and/or decrease in oxygen saturation ≥3% to detect silent aspiration. One or more signs of impaired effectivity or safety indicate swallowing difficulties [43,44,45].
MEOF-II is a systematic observation of a meal with a variation of viscosities. The test includes observations related to three categories of eating-related disabilities: (1) ingestion, (2) deglutition, and (3) energy/appetite. Each category contains three sub-questions: (1) ingestion includes “sitting position,” “manipulation of food on the plate,” and “transport of food to the mouth,” (2) deglutition includes “manipulation of food in the mouth,” “swallowing,” and “ability to chew,” and (3) energy/appetite includes “eating less than 3/4 of served food,” “energy to eat until having satisfied hunger,” and “appetite compared to previously” [3,4,46,47].
In this study, eating difficulties assessed through the MEOF-II were categorized into no eating difficulties or eating difficulties. Patients with a dysfunction in ingestion, deglutition, and/or energy/appetite regarding the sub-question “energy to eat until having satisfied hunger” were considered to have swallowing and eating difficulties. Patients with a dysfunction only in energy/appetite regarding the sub-questions “eating less than ¾ of served food” and/or “appetite compared to previously” were not considered to have swallowing and eating difficulties since it is well known that many patients experience nausea and decreased appetite after surgery [48,49].
If either the V-VST or MEOF-II test was positive, the patient was considered to have swallowing and eating difficulties.

Demographic data were gender, age, body mass index (BMI), and habitual housing form and clinical factors score according to the American Society of Anesthesiologists (ASA score), comorbidity, fracture type, time from admission to surgery, anesthesia type, surgery type, time from surgery to swallowing and eating assessment, presence of delirium according to The Confusion Assessment Method (CAM) and Cumulated Ambulation Score (CAS score) day 1 after surgery. These data were obtained from medical records. Habitual New Mobility Score (NMS) and knowledge of swallowing difficulties demonstrated before the hip fracture were obtained based on self-reporting from the patient, a relative, or a care assistant.

Assessment of swallowing and eating difficulties is common practice in Denmark, but not systematically. This is a quality development project where the assessment was performed systematically, and therefore, the regional ethical committee of Northern Denmark waived the need for approval. The study was registered with the Danish Data Protection Authority (2008-58-0028).

To our knowledge, no studies have previously focused on swallowing and eating difficulties in a broader perspective in an elderly postoperative hip fracture population. The broader perspective enables a focus on several important prerequisites to swallowing and eating that are highly relevant for the population, for instance their sitting position. Therefore, the broader perspective is the main strength of this study. A further strength is that swallowing and eating assessment was performed in 84% of the patients who fulfilled the inclusion criteria.
The sample size in this study was relatively small, which may have led to type II error. Furthermore, data regarding BMI, ASA score, delirium, habitual NMS, habitual swallowing difficulties, type of anesthesia, and CAS are not complete. Love et al. (2013) demonstrated an association between postoperative dysphagia and postoperative delirium [41] and Beric et al. (2019) that postoperative confusion predicted dysphagia post-surgery [39]. Meals et al. (2016) demonstrated that the ASA score was a meaningful predictor of dysphagia [42]. The fact that we could not observe any association between swallowing and eating difficulties and delirium and the ASA score, respectively, in our study may be explained by the small sample size and the missing data.
As mentioned earlier, patients operated for hip fracture are characterized by high age [26], and therefore cognitive impairment in this patient group is likely. In Denmark, screening for cognitive impairment during hospitalization is not common practice, and therefore screening for cognitive function was not done in this study, though it would have been relevant.
Due to the cross-sectional design in this study, no detection of causal relationships is possible. Furthermore, because there was no follow-up, possible changes in swallowing and eating difficulties over time, for instance as a result of physical training, were not identified.
Habitual NMS and habitual swallowing difficulties were obtained based on self-reporting from the patient, a relative, or a care assistant, and information bias is, therefore, possible. Simultaneously, an underestimation of the habitual swallowing difficulties is possible since patients were not tested before the operation.
Video fluoroscopy and fiberoptic endoscopic evaluation of swallowing are objective assessments of swallowing function [56]. It was not possible to use these assessments in our clinical setting. Instead, to examine swallowing difficulties, we used V-VST, which is translated into Danish but not yet validated in Denmark. V-VST was chosen because studies have shown a strong correlation between video fluoroscopy and V-VST [43] and given the fact that V-VST has been recommended in reviews [57,58]. V-VST uses a decrease of oxygen saturation ≥3% to detect silent aspiration, which is not a reliable indicator [59]. Furthermore, pharyngeal residue is impossible to visualize in a bedside screening but was in this study based on the question of patient experience.
To examine eating difficulties we used MEOF-II. MEOF-II is validated and recommended as a measurement for the performance of a meal [3,46]. A study recently published provides support for the reliability and validity of the Danish version of the MEOF II [47]. MEOF-II is not validated for detecting dysphagia, and the tool has no focus on the viscosity of the food, but the occupational therapist who performed the MEOF-II used food and fluids with different viscosities.
Patients not screened for swallowing and eating difficulties were more likely to live habitually in a nursing home and to be delirious postoperatively. As mentioned earlier, living in a residential aged care facility before hospital admission and presence of postoperative delirium has previously been found to be associated with postoperative dysphagia in elderly patients with hip fracture [39,41]. Patients not screened waited, on average, for a longer time from admission to surgery, and more of the patients not screened underwent surgery in general anesthesia. A previous study has shown that waiting time to surgery is correlated with an increased risk of serious adverse events during the hospital stay in patients with hip fracture [60], adverse events out of which some are previously documented to be associated with dysphagia [41]. Finally, patients not screened had a lower CAS day 1 after surgery. CAS is a valid tool for evaluating basic mobility in patients with hip fracture [61], and a lower CAS in patients not screened indicates a less independent and thereby more fragile group than patients screened. All these factors can lead to selection bias, underestimating the prevalence of swallowing and eating difficulties.

Swallowing and eating difficulties were highly prevalent (77%) in the elderly postoperative hip fracture population. Living in a nursing home before hospital admission, a low habitual NMS, and the absence of cardiac comorbidity were found to be significantly associated with swallowing and eating difficulties. The results indicate that systematic assessment of swallowing and eating difficulties in the elderly operated for hip fracture may be important to ensure effectivity and safety during meals and thereby improve the requisites of sufficient nutrition, prevent secondary complications, and improve the prognosis for the patients. However, because the study was conducted as a pilot study and thereby had a small sample size, the results needs to be tested in a larger study. 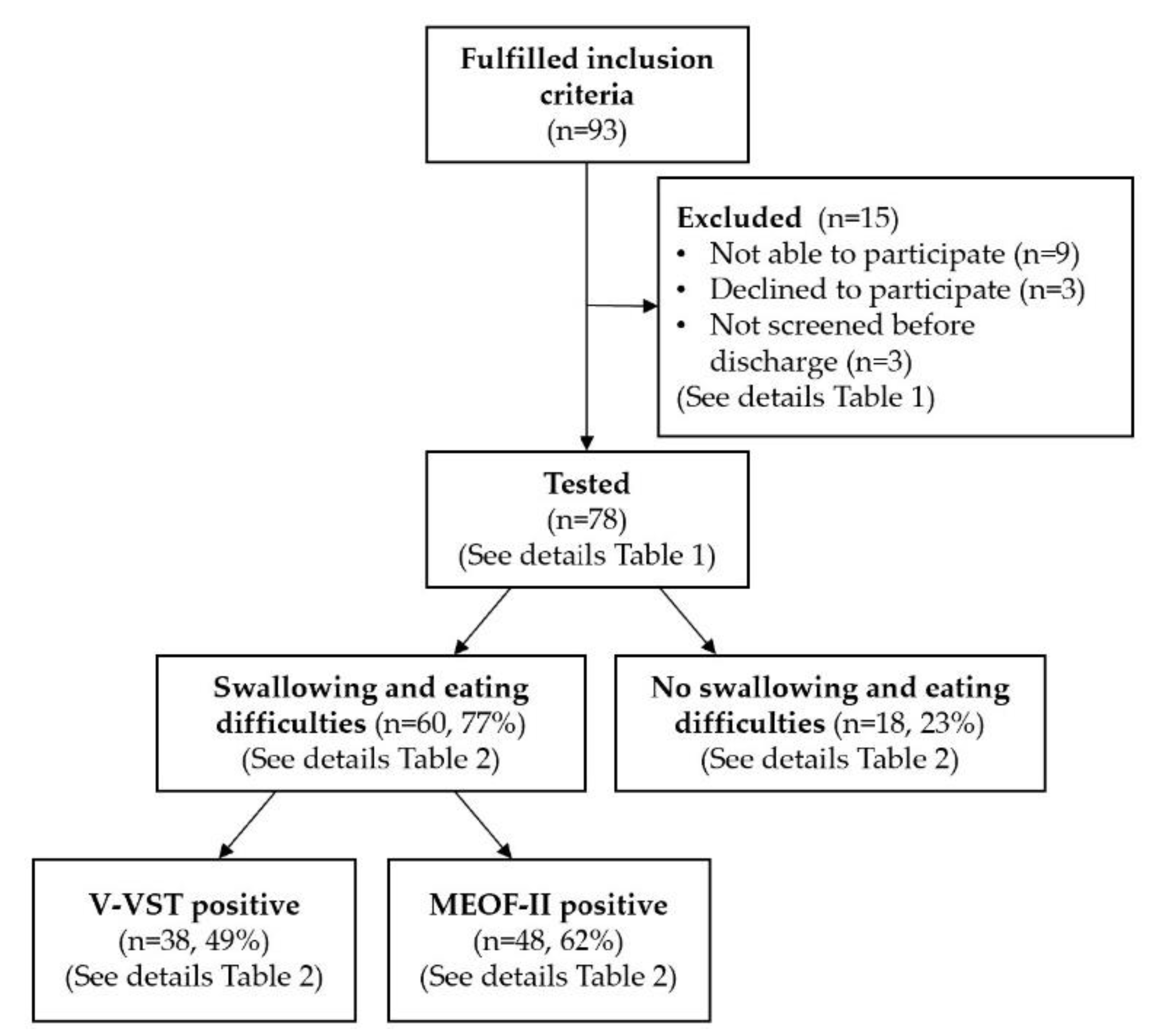