Bariatric Procedures in Older Adults in the United States: Analysis of a Multicenter Database

Background: It is unclear whether doctors base their resuscitation decisions solely on their perceived outcome. Through the use of theoretical scenarios, we aimed to examine the ‘do not attempt cardiopulmonary resuscitation’ (DNACPR) decision-making. Methods: A questionnaire survey was sent to consultants and specialty trainees across two Norfolk (UK) hospitals during December 2013. The survey included demographic questions and six clinical scenarios with varying prognosis. Participants were asked if they would resuscitate the patient or not. Identical scenarios were then shown in a different order and doctors were asked to quantify patients’ estimated chance of survival. Results: A total of 137 individuals (mean age 41 years (SD 7.9%)) responded. The response rate was 69%. Approximately 60% were consultants. We found considerable variation in clinician estimates of median chance of survival. In three out of six of our scenarios, the survival estimated varied from <1% to 95%. There was a statistically significant difference identified in the estimated median survival between those clinicians who would or would not resuscitate in four of the six scenarios presented. Conclusion: This study has highlighted the wide variation between clinicians in their estimates of likely survival and little concordance between clinicians over their resuscitation decisions. The diversity in clinician decision-making should be explored further. View Full-Text
Keywords: DNACPR; futility; estimating survival; resuscitation DNACPR; futility; estimating survival; resuscitation
►▼ Show Figures 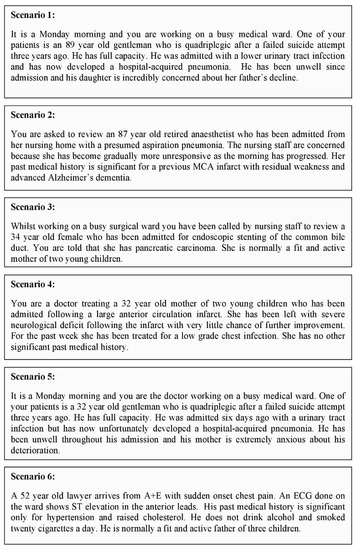