Production of Polyhydroxyalkanoates Using Hydrolyzates of Spruce Sawdust: Comparison of Hydrolyzates Detoxification by Application of Overliming, Active Carbon, and Lignite

Polyhydroxyalkanoates (PHAs) are bacterial polyesters which are considered biodegradable alternatives to petrochemical plastics. PHAs have a wide range of potential applications, however, the production cost of this bioplastic is several times higher. A major percentage of the final cost is represented by the price of the carbon source used in the fermentation. Burkholderia cepacia and Burkholderia sacchari are generally considered promising candidates for PHA production from lignocellulosic hydrolyzates. The wood waste biomass has been subjected to hydrolysis. The resulting hydrolyzate contained a sufficient amount of fermentable sugars. Growth experiments indicated a strong inhibition by the wood hydrolyzate. Over-liming and activated carbon as an adsorbent of inhibitors were employed for detoxification. All methods of detoxification had a positive influence on the growth of biomass and PHB production. Furthermore, lignite was identified as a promising alternative sorbent which can be used for detoxification of lignocellulose hydrolyzates. Detoxification using lignite instead of activated carbon had lower inhibitor removal efficiency, but greater positive impact on growth of the bacterial culture and overall PHA productivity. Moreover, lignite is a significantly less expensive adsorbent in comparison with activated charcoal and; moreover, used lignite can be simply utilized as a fuel to, at least partially, cover heat and energetic demands of fermentation, which should improve the economic feasibility of the process.
Keywords: polyhydroxyalkanoates; detoxification; lignite; Burkholderia polyhydroxyalkanoates; detoxification; lignite; Burkholderia

Polyhydroxyalkanoates (PHAs) are polyesters which are synthesized by numerous naturally occurring microorganisms as energy and carbon storage materials. Moreover, due to their mechanical and technological properties resembling those of some petrochemical plastics, PHAs are generally considered a biodegradable alternative to petrochemical-based synthetic polymers [1]. PHAs have a wide range of potential applications, however, the production cost of these bioplastics are several times higher which complicates their production at an industrial scale [2].
A substantial percentage of the final cost is represented by price of carbon substrate [3]. This is the motivation for seeking alternative sources for PHAs production. Among numerous inexpensive or even waste substrates, lignocellulose materials—with sn annual generation of 80 billion tons—represent one of the most promising resources for biotechnological production of (not only) PHAs [4]. Nevertheless, utilization of lignocellulosic materials is accompanied by numerous obstacles stemming from the complex nature of these materials. To access fermentable sugars from cellulose and hemicellulose, a hydrolytic step is required. The hydrolysis of complex lignocellulose biomass is usually performed in two steps. Diluted mineral acid is used in the first step to hydrolyze hemicellulose and to disrupt the complex structure of lignocellulose, which enables subsequent enzymatic hydrolysis of cellulose [5]. Nevertheless, apart from utilizable sugars, also numerous microbial inhibitors such as organic acids (e.g., acetic, formic or levulinic acid), furfurals, and polyphenols are generated by the hydrolysis process. These substances usually reduce fermentability of the hydrolyzates and decrease yields of the biotechnological processes. This problem can be solved by introduction of detoxification. Generally, the aim of detoxification is to selectively remove or eliminate microbial inhibitors from the hydrolyzate prior to biotechnological conversion of the hydrolyzate into desired products [6].
Numerous detoxification methods are based on more or less selective removal of inhibitors by their adsorption on various sorbents. The most commonly used sorbent for this purpose is active carbon, nevertheless, this detoxification strategy suffers from high cost of the sorbent [6]. On the contrary, lignite represents a very promising, low-cost, and effective sorbent which has already been used for the treatment of wastewater to remove various organic and inorganic contaminants [7].
The woodworking industry generates a variety of solid waste materials, such as sawdust, shavings, or bark. It is true that many of these waste materials are already used in various applications. Wood waste is very often burned and used for heat and electricity generation. On the contrary, it could be a potentially inexpensive and renewable feedstock for biotechnological production of PHAs. For instance, Pan et al. employed Burkholderia cepacia for biotechnological production of PHAs from detoxified maple hemicellulosic hydrolyzate [8]. Further, Bowers et al. studied PHA production wood chips of Pinus radiata which were subjected to high-temperature mechanical pre-treatment or steam explosion in the presence of sulphur dioxide before being enzymatically hydrolyzed. Novosphingobium nitrogenifigens and Sphingobium scionense were used for PHA production on these hydrolyzates [9]. Brevundimonas vesicularis and Sphingopyxis macrogoltabida were employed by Silva et al. [10] to produce ter-polymer consisting of 3-hydroxybutyrate, 3-hydroxyvalerate, and lactic acid (3-hydroxypropionate) from acid hydrolyzed sawdust. Despite the fact that PHA production capabilities are exhibited by many bacterial strains, Burkholderia cepacia and Burkholderia sacchari are the most commonly used for PHA production from hydrolyzates of lignocellulosic materials [8,11,12].
In this study, wood hydrolyzate was utilized as a carbon source for production of polyhydroxyalkanoates. Moreover, since hydrolyzates contain substantial concentrations microbial inhibitors, various detoxification methods including the novel application of lignite as a sorbent are used to improve the fermentability of wood hydrolyzate based media and thus, the PHA yields obtained on this promising substrate.

Spruce sawdust was supplied by a wood processing company. The waste material was firstly dried to constant weight (80 °C for 24 h). Sawdust was then pretreated with diluted acid and thereafter subjected to enzymatic hydrolysis. To hydrolyze the hemicelluloses of raw material, 20% (w/v) pre-dried sawdust was treated by 4% H2SO4 for 60 min at 121 °C. Enzymatic hydrolysis, as a following step, was used for digestion of cellulose structure to release further fermentable saccharides. It was performed by adjusting the pH of the suspension to 5.0 by NaOH and cellulose was treated by 0.5% of Viscozyme L (Sigma-Aldrich, Deisenhofen, Germany) at 37 °C under permanent shaking for 24 h. Subsequently, solids were removed by filtration and the permeate, called wood hydrolyzate (WH), was used in the preparation of the cultivation medium and for PHA production.

Overliming was carried out as described by Ranatunga et al. [13], whereupon pH of the hydrolyzate was adjusted to approx. pH 10.0 using solid calcium hydroxide. The samples were then kept at 50 °C for 30 min, the pH was adjusted back to 7, and the sample was subsequently filtered through filter paper.
Detoxification with activated charcoal was performed as described by Pan et al. [8]. Charcoal was added to hydrolyzate in the ratio 1:20 (w/v) and stirred for 1 h at 60 °C. Solid particles were removed by filtration. Furthermore, detoxification with lignite was performed similarly, finely milled lignite power (grain size of under 0.2 mm) from South Moravian Coalfield (the northern part of the Vienna basin in the Czech Republic) was used.

All analyses of hydrocarbons and furfural were performed with a Thermo Scientific UHPLC system–UltiMate 3000. REZEX-ROA column (150 × 4.6 mm, 5 μm; City, Phenomenex, Torrance, California, USA) was used for separation. The mobile phase was 5 mN H2SO4 at a flow rate of 0.5 mL per min. Xylose and other saccharides were detected using a refractive index detector (ERC RefractoMax 520). Acetate, levulinic acid and furfural were detected with a Diode Array Detector (DAD-3000) at 284 nm.
Total phenolics were determinated as described by Li et al. [14] with the Folin–Ciocalteu reagent (Sigma-Aldrich). Gallic acid was used for calibration and total phenolics were expressed as milligrams of gallic acid equivalents per liter of wood hydrolyzate.

This article demonstrates the possibilities of utilization of lignite in biotechnology. Lignite can be used as a sorbent to detoxify wood hydrolyzate and its efficiency was comparable with commonly used activated carbon. This detoxification method was evaluated directly using the hydrolyzates to produce PHAs employing Burkholderia cepacia and Burkholderia sacchari. The results showed that the use of lignite considerably improved fermentability of wood hydrolyzates and enhanced PHA yields. Therefore, lignite can cope with significantly more expensive activated carbon.

This work was supported by the project Materials Research Centre at FCH BUT–Sustainability and Development No. LO1211 and by national COST project LD15031 of the Ministry of Education, Youth, and Sports of the Czech Republic and by the project GA15-20645S of the Czech Science Foundation (GACR). 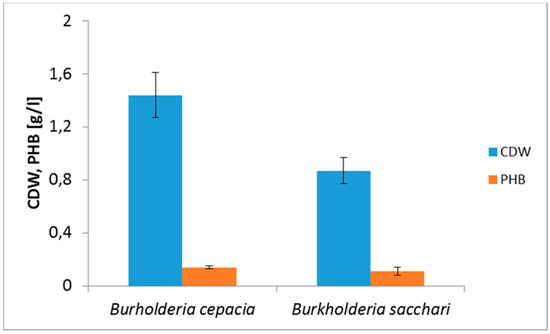 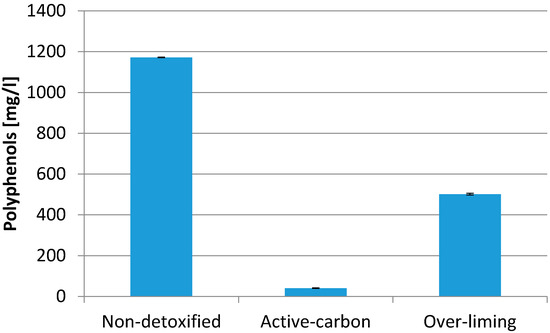 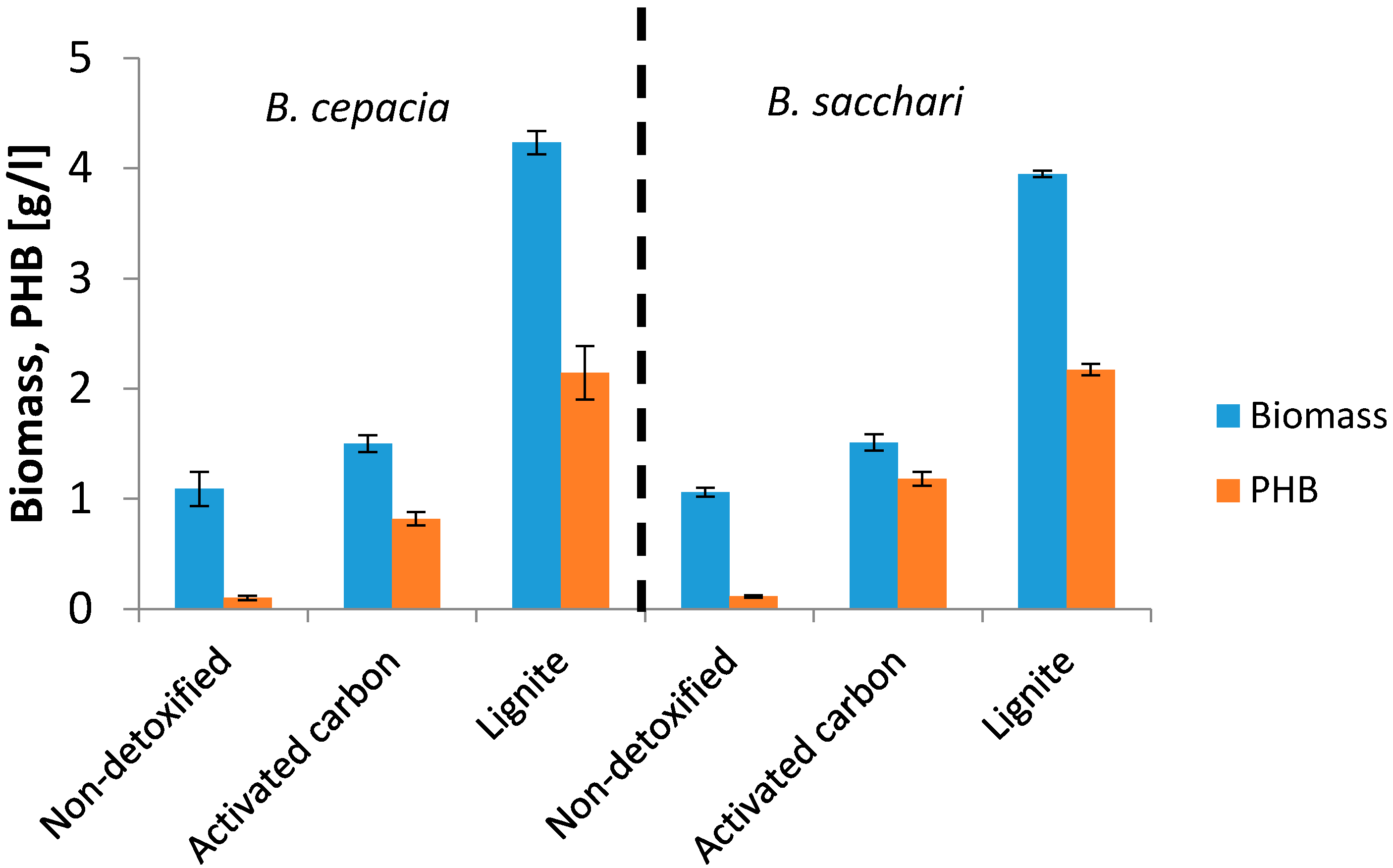 Table 3. Detoxification using active carbon and lignite
Table 3. Detoxification using active carbon and lignite
© 2017 by the authors. Licensee MDPI, Basel, Switzerland. This article is an open access article distributed under the terms and conditions of the Creative Commons Attribution (CC BY) license (http://creativecommons.org/licenses/by/4.0/).
We use cookies on our website to ensure you get the best experience. Read more about our cookies here.
Accept
We have just recently launched a new version of our website. Help us to further improve by taking part in this short 5 minute survey here. here.
Never show this again