So, You Think You Have an Idea: A Practical Risk Reduction-Conceptual Model for Academic Translational Research
Next Article in Special Issue

Successful scale-up of bioprocesses requires that laboratory-scale performance is equally achieved during large-scale production to meet economic constraints. In industry, heuristic approaches are often applied, making use of physical scale-up criteria that do not consider cellular needs or properties. As a consequence, large-scale productivities, conversion yields, or product purities are often deteriorated, which may prevent economic success. The occurrence of population heterogeneity in large-scale production may be the reason for underperformance. In this study, an in silico method to predict the formation of population heterogeneity by combining computational fluid dynamics (CFD) with a cell cycle model of Pseudomonas putida KT2440 was developed. The glucose gradient and flow field of a 54,000 L stirred tank reactor were generated with the Euler approach, and bacterial movement was simulated as Lagrange particles. The latter were statistically evaluated using a cell cycle model. Accordingly, 72% of all cells were found to switch between standard and multifork replication, and 10% were likely to undergo massive, transcriptional adaptations to respond to extracellular starving conditions. At the same time, 56% of all cells replicated very fast, with µ ≥ 0.3 h−1 performing multifork replication. The population showed very strong heterogeneity, as indicated by the observation that 52.9% showed higher than average adenosine triphosphate (ATP) maintenance demands (12.2%, up to 1.5 fold). These results underline the potential of CFD linked to structured cell cycle models for predicting large-scale heterogeneity in silico and ab initio. View Full-Text
Keywords: computational fluid dynamics; cell cycle model; Lagrange trajectory; scale-up; stirred tank reactor; population dynamics; energy level computational fluid dynamics; cell cycle model; Lagrange trajectory; scale-up; stirred tank reactor; population dynamics; energy level
►▼ Show Figures 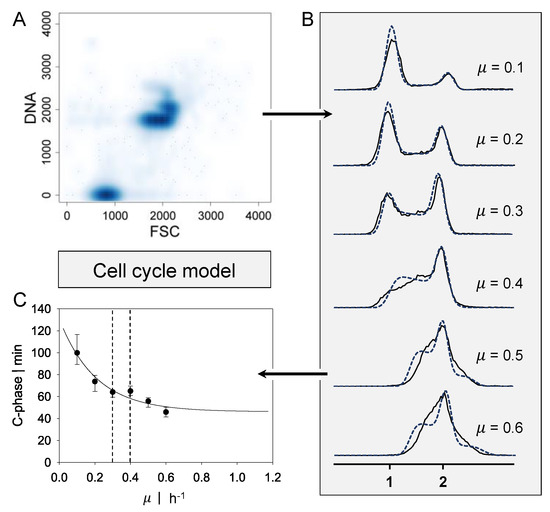