Development of a Catalytic Fuel Processor for a 10 kW Combined Heat and Power System: Experimental and Modeling Analysis of the Steam Reforming Unit
Next Article in Special Issue

Effect of Noble Metals (Ag, Pd, Pt) Loading over the Efficiency of TiO2 during Photocatalytic Ozonation on the Toxicity of Parabens †

The conventional wastewater treatments are inadequate for emerging contaminants detoxification. Photocatalytic ozonation with suitable catalyst can be considered as a suitable solution on the removal of these compounds. The aim of this study was to verify the effect of Ag, Pd and Pt with different loadings (0.1, 0.5 and 1% wt %) onto TiO2 surface for the degradation of a mixture of parabens (methyl, ethyl, propyl, butyl and benzyl) through photocatalytic ozonation. Chemical oxygen demand (COD) and total organic carbon (TOC) was also analyzed after treatments, as well as the effect of the treatment on the samples toxicity over different species, including bacteria, clams and plants. The effect of metal loading on the parabens degradation; COD and TOC removal is very dependent upon the type of noble metal used. This can be related with the different pathways influenced by the metal load. On the one hand, it can be related with the reduction of electron–hole recombination phenomenon, and, on the other hand, the trapping of electrons by the metals reduces the amount of ozonide and hydroxyl radicals produced. In terms of toxicity, apparently the best results were achieved with the intermediate noble metal load. However, the effect of noble metal load must be analyzed case to case. View Full-Text
Keywords: metal loading; photocatalytic ozonation; emerging contaminants; toxicity reduction metal loading; photocatalytic ozonation; emerging contaminants; toxicity reduction
►▼ Show Figures 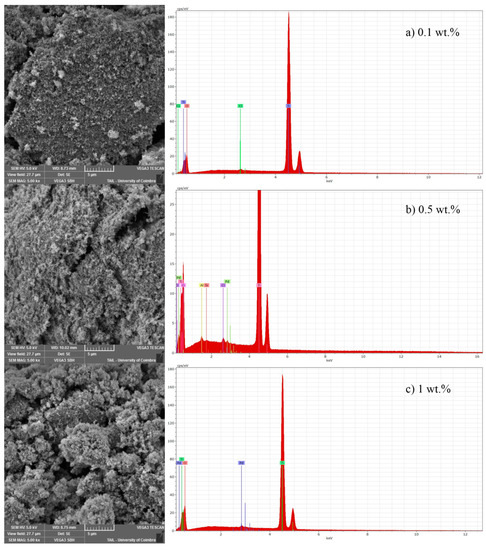