Contrast-Enhanced Ultrasonography for Screening and Diagnosis of Hepatocellular Carcinoma: A Case Series and Review of the Literature

Bacterial infections of the gastrointestinal tract, including pathogenic Escherichia coli O157 infections, are important communicable diseases because they infect many people and include deaths [1,2]. Even though antibiotic treatment is the gold standard for bacterial infections, sensitivity to antibiotics has decreased due to the spread of multidrug-resistant bacteria, such as extended spectrum β-lactamase- and carbapenemase-producing bacteria [3,4]. Furthermore, excess production of several bacterial toxins, such as Shiga toxins, occurs as a result of antibiotic use against O157, which leads to hemolytic uremic syndrome [5]. However, the use of antibiotic therapy is avoided for some diseases. Thus, it is necessary to develop new therapeutic methods that do not rely on antibiotics.
Lonicera japonica is one of the popular medicinal plants among honeysuckles, and its dried flower bud (LJF) is used as an antipyretic and detoxification agent in traditional Chinese medicine (TCM) [6]. In TCM, LJF is used as a detoxification agent for purulent diseases and an anti-inflammatory agent for upper respiratory tract inflammation (e.g., wind fever). In addition, LJF may be effective against pharyngitis and pneumonia, as respiratory infections might be the target of its broad medicinal effects [7]. Although digestive tract infection is considered to cause enteritis, most studies testing the impacts of LJF were performed in animal models of respiratory infections, such as pneumonia, and there are few studies on its effectiveness against purulent diseases, such as gastrointestinal tract infections [8].
Therefore, to clarify the effectiveness of LJF against diseases other than respiratory tract infections, we used a mouse model of Citrobacter rodentium infection in this study, which showed the same symptoms as human O157 digestive tract infectious disease [9]. The objective of this study was to prevent the spread of multidrug-resistant bacteria by establishing a novel treatment method for bacterial digestive tract infections using crude drugs without relying on antibiotics.

In the infection experiment, female C57BL/6 mice (six weeks old) (Japan SLC Inc., Hamamatsu, Japan) were used. One group consisted of eight mice. To examine the in vivo antibacterial effect of LJFE, Citrobacter rodentium was cultured on LB agar medium (Becton Dickinson and Company) at 37 °C for 24 h on the day before the infection. On the day of the infection, the bacteria were suspended in sterile PBS, and mice in each group were orally administered 1 × 108 CFU bacteria under anesthesia. We defined the viable bacterial count of the inoculum by serial dilution and plating on LB agar. Mice were orally administrated polymyxin B sulfate (100 mg/kg/day; Fujifilm Wako Pure Chemical Co., Osaka, Japan) on the day before the infection because the administration of polymyxin B reduces the number of indigenous bacteria in the intestinal tract, thereby facilitating the detection of Citrobacter [10]. The maximum dose of LJF is described as 15 g/day in Chinese herbal medicine [11]. Using the ratio of yielded extract described above and the body weight, this dose corresponds to LJFE 0.11 g/kg/day. Usually, the dose for animal experiments is approximately 10–20-fold the human dosage; we chose a LJFE dose of 1 or 2 g/kg/day. LJFE was orally administrated in physiological saline or the vehicle once a day using a gastric tube from the day before the infection until the end of the observation. To evaluate the therapeutic effects, the general condition of the mice was observed over time. When an infected mouse died or seven days after the infection, mice were euthanized by CO2, and their tissues were collected. A part of the large intestine was fixed in formalin, and a histological analysis was carried out utilizing hematoxylin and eosin (H & E) staining. Another part of the large intestine, and the mesenteric lymph node of the mice were homogenized in saline. Blood was also aseptically separated from the mice. Aliquots of blood and the homogenates were serially diluted and cultured on MacConkey agar medium (Eiken Chemical Co., Ltd., Tokyo, Japan) for 24 h at 37 °C. Then, we counted the number of bacterial colonies. All animal experiments were approved by Nagoya City University Committee (Ethical approval code: H28M-05; Date of approval: 2 March 2016).

2.4. Analysis of Ex Vivo Effects of LJFE on Immune Functions

Ex Vivo animal studies were performed with some modifications [12]. Serum and intraperitoneal macrophages were collected from mice treated with oral LJFE (2 g/kg body weight), CGA (9.2 mg/kg body weight), or saline once a day for seven days. After the peritoneal macrophage cells were harvested by lavage with cold sterilized PBS from the peritoneal cavities, they were cultured at 37 °C with 5% CO2 atmosphere for 24 h. Intraperitoneal macrophages (1 × 106 cells) and Citrobacter rodentium (1 × 105 CFU) opsonized in advance with mouse serum were added to RPMI1640 (Fujifilm Wako, Osaka, Japan) and cocultured at 37 °C for 60 min in the presence of 5% CO2. After 24 h, we counted the bacterial colonies found in the MacConkey agar culture with serial dilution. Intraperitoneal macrophages collected from the mice treated with LJFE were cultured in RPMI1640 supplemented with 5% fetal calf serum (FCS, Sigma–Aldrich, St. Louis, MO, USA) for 24 h at 106 cells/mL. We measured the values of interleukin (IL)-1β, tumor necrosis factor (TNF)-α, interferon (IFN)-γ, and IL-6 in the culture supernatant by utilizing ELISA kits (BioLegend, San Diego, CA, USA). In another experiment, 106 cells/mL intraperitoneal macrophages were cultured in RPMI1640 containing 5% FCS and 3H-thymidine (2.0 Ci/mL, PerkinElmer, Inc., Waltham, MA, USA) for 24 h. We measured the radioactivity of the cells by utilizing a liquid scintillation counter.

Before studying the pharmacology of LJFE, we analyzed LJFE chemically in order to certificate the reproducibility of the study. Figure 1 shows the fingerprint pattern of LJFE by HPLC-PDA analysis. The concentration of CGA, the marker compound, in LJFE was 0.46 (w/w, %).

3.2. In Vitro Effects of LJFE against Citrobacter rodentium

In this study, the direct antibacterial effects of LJFE on Citrobacter rodentium DSB100 were measured based on the turbidity of bacterial suspensions; however, there were no significant differences among the absorbance values of bacterial cultures with different LJFE concentrations. Therefore, LJFE produced no direct antibacterial effect against Citrobacter rodentium, even at the maximum concentration of 5 mg/mL (data not shown).

3.3. In Vivo Effects of LJFE against Citrobacter rodentium in a Mouse Model

Most Citrobacter rodentium-infected mice died one day after the infection. However, the survival rates of LJFE-treated mice increased (until five days; p < 0.01) according to the dose (Figure 2). In the histopathological analysis, although a bacterial mass was observed in the colonic mucosa in bacterial-infected mice, it was not visible in the LJFE (2 g/kg LJFE group)-administered bacterial-infected mice (Figure 3). Moreover, the number of Citrobacter rodentium colonies in the large intestine, mesenteric lymph nodes, and blood in the LJFE-treated group was significantly depressed relative to that in the control group (p < 0.01) (Figure 4).

3.4. Effects of LJFE on Serum Cytokine Levels of Mice

3.5. Ex Vivo Effects of LJFE on the Phagocytic Activity of Peritoneal Macrophages against Citrobacter rodentium in Mice

3.7. Ex Vivo Effects of LJFE on Cytokine Secretions from Peritoneal Macrophages in Mice

The levels of IL-1β, IFN-γ, and TNF-α in the culture supernatant of peritoneal macrophages collected from the LJFE-treated mice were significantly higher than those from the control group (p < 0.05, Figure 8). However, we could not confirm any significant difference in IL-6 levels between the two groups (data not shown).

3.8. Ex Vivo Effects of CGA on the Phagocytic Activity of Peritoneal Macrophages against Citrobacter rodentium in Mice

This study was partly supported by research grant from the Foundation of Oriental Medicine Study.

The authors thank Masashi Ishihara and Miwako Fujimura for their excellent support through this investigation.

Authors declare that there are no conflict of interest regarding the publication of this manuscript. 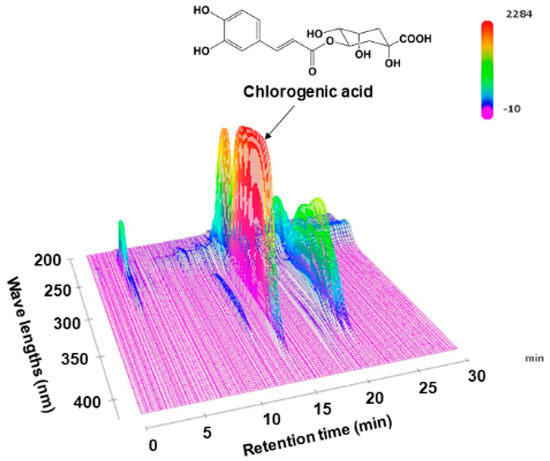 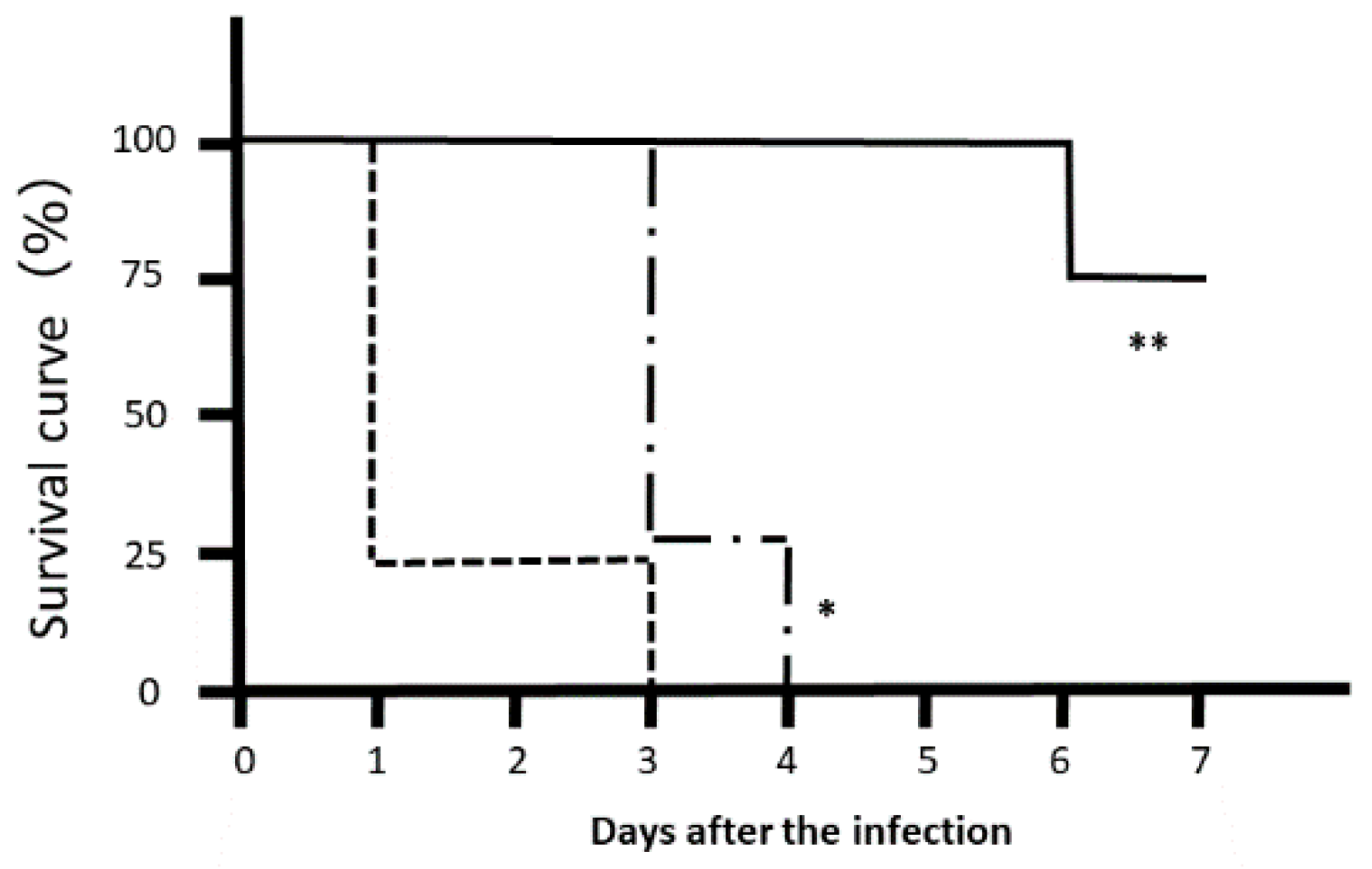 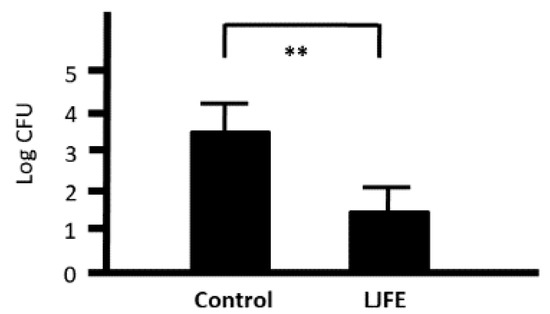 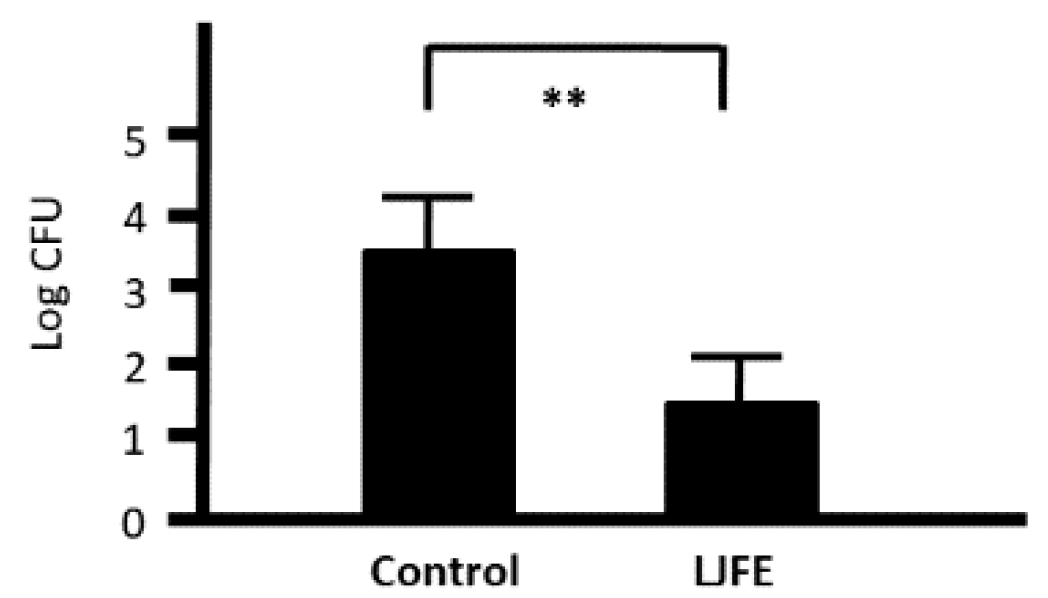 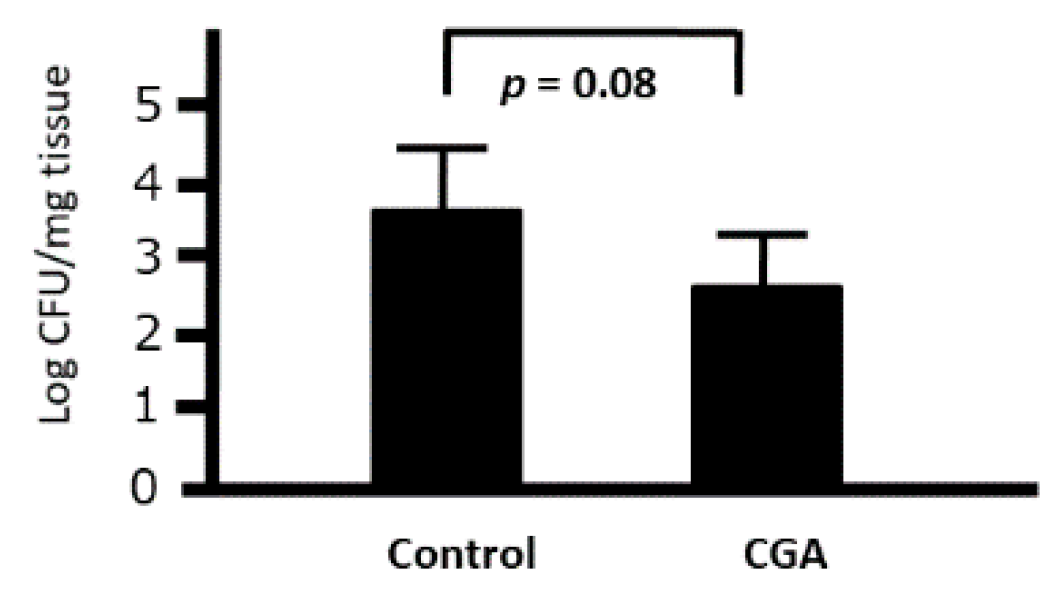