Addition of Multimodal Immunotherapy to Combination Treatment Strategies for Children with DIPG: A Single Institution Experience
Next Article in Special Issue

The breasts are one of the most important characteristics of femininity [1]. Breast augmentation surgery with implants is one of the most common aesthetic surgical procedures performed worldwide. In patients that will undergo breast augmentation, various factors need to be addressed like the age of the patient, the breast volume, the tissue coverage, the type and the size of the implant, and the resulting scars. Breast augmentation is among the procedures that are most performed worldwide [2]. There are reports, though, that revision surgery due to non-satisfactory results or complications like implant show, rotation, capsule contracture and implant malposition need to be addressed [3]. Many patients also notice the unnatural result of the breast augmentation achieved when only silicone implants are used.
Recently, there are several published articles that demonstrate that stromal enriched fat grafts provide a good cell viability proving that it is an effective and safe and procedure in just one treatment session with high patient satisfaction [4,5,6,7,8].
This is a prospective study to analyse the rate of complications and the rate of satisfaction following breast augmentation using the technique of inclusion of silicone implant alone (traditional breast augmentation), Group A, versus the technique of inclusion of the implant assisted with SEL (composite breast augmentation), Group B.

Fifty female patients, candidates for breast augmentation, were included between January to September 2017 in this study. Breast hypoplasia was the inclusion criterion for random assignment into either to Group A or Group B, and they all underwent silicone implant breast augmentation. Patients in Group A had the traditional breast augmentation using textured round silicone implants. Patients in Group B underwent the composite breast augmentation using textured round implants combined with SEL. The amount of fat to be grafted in Group B patients was chosen based on the patient’s preference for the size of the breast. The surgeon and each patient discussed the different silicone implant sizes and the amount of fat to be injected on each site of the breast in order to camouflage the implant and give a more natural final result. After the silicone implant was inserted, the areas of the breast that needed to be fat grafted were marked, and SEL was injected. All patients signed an informed consent form to participate in the study, which was approved by the Ethics and Scientific Committee of IASO General hospital EC 29/8-9-2016. Date of approval: 8 September 2016. The criteria for inclusion in this study were female patients that were ≥18 years old who had not been submitted previously to any breast surgery and requested augmentation for cosmetic purposes. The exclusion criteria were female patients with a previous history of breast cancer, mammoplasty, breast augmentation with or without the use of silicone implant, serious systemic diseases and patients that did not agree to be randomly assigned to the study. The demographics of the patients were analysed based on the age, body mass index (BMI), smoking and the past medical history. The body appearance satisfaction following breast augmentation was rated on a scale of 1–5 where 1 was poor, 2 was fair, 3 was good, 4 was very good and 5 was excellent. This specific scale has already been published in peer reviewed articles [9,10]. The evaluation was done 1 year after the surgery. The rates of complications are shown for each group.
IBM SPSS for Macintosh version 21.0 (SPSS, IBM Corp., Armonk, NY, USA) was used for statistical analysis. An a priori power analysis was used in order to have 80% power and an α level of 0.05, capable of achieving a significant PSR difference. It was calculated that 50 patients were needed.
The patients’ satisfaction rates (PSR) at 12 months were summarized as means (SDs) for each group. To compare differences in PSRs between the 2 groups, mixed-effects regression models were applied, with dependent variables being the PSR values and the predictors that correlate with these PSR values at 12 months postoperatively, using Rubin’s rules. Adjusted means of PSR values were performed using SAS platform, version 9.4, and p < 0.05 was set as the statistical significance.

AS performed the surgical procedures in both groups. The age ranged from 19 to 48 years (mean of 22.5 years) in Group A. The age ranged from 20 to 47 years (mean of 24.1 years) in Group B. The average BMI for Group A was reported to be 24 m/kg2 and 23 m/kg2 for Group B. Ten patients were smokers in Group A and twelve in Group B. The mean volume of implant inserted was 285 cc (range, 195–385 cc) in Group A and 235 cc (range, 195–315 cc) in Group B. The mean volume of SEL inserted in Group B was 75 cc per breast (range, 35–110 cc). The average time for a traditional breast augmentation in Group A ranged between 60–110 min. The average time for the composite breast augmentation in Group B ranged between 75–120 min. In Group A, 4 patients had scar hypertrophy, and one patient breast asymmetry. No infection was reported and no hematoma or capsular contracture. Scar hypertrophy in 2 patients was reported in Group B. No capsular contracture, hematoma or infection were noted in group B. No implant dislocation was observed in this series of patients. All patients in both groups had only one operation, and no secondary intervention was needed. No oil cysts were noted in any patient including smokers and non-smokers in Group B.
At 12 months post operation, in Group A, 13 patients answered that their result was “very good” (8) to “excellent” (5); ten reported that their result was “good” and two “fair” (Figure 8A). At 12 months, in Group B, 19 patients answered that their appearance was “very good” (11) to “excellent” (8) and six that their appearance was “good” (Figure 8B). The average follow-up time for both groups was 2.3 years. The mean score for the patient satisfaction rate for Group A was 3.72 (SD = 2.29) out of 5 and 4.08 (SD = 2.29) for Group B. The parameters, in descending order, that were most important in this study were the breast symmetry, the final breast shape, and the resulting scar (p < 0.05).

This 24-year-old female patient asked for breast contour enhancement (Figure 9A,B). She was randomly placed into Group A. Bilateral breast augmentation using round high-profile breast implants was done (195 mL). Postoperative views 12 months after the procedure are shown (Figure 9C,D). At 12 months she reported her aesthetic result as very good.

A 38-year-old female patient asking for breast augmentation (Figure 10A,B). She was randomly placed into Group A. She had round high-profile silicone implants placed bilaterally (285 mL). The postoperative result 12 months after the procedure is shown (Figure 10C,D). At 12 months, her result was reported as excellent.

A 47-year-old woman presented to our department for breast augmentation (Figure 11A,B). She was assigned to Group B. Bilateral breast augmentation was done with round high-profile breast implants (285 mL) and SEL of 96 mL on the right breast and 106 mL on the left breast. Twelve months after the procedure, the result is shown (Figure 11C,D). The satisfaction rate at 12 months was rated excellent.

A 25-year-old woman asked for a breast augmentation (Figure 12A,B). She was randomly assigned to Group B. Bilateral breast augmentation was performed by round high-profile silicone implants (235 mL) and SEL of 56 mL on the right breast and 65 mL on the left breast. Photos were taken postoperatively 12 months after the procedure (Figure 12C,D). At 12 months, her satisfaction was rated very good. 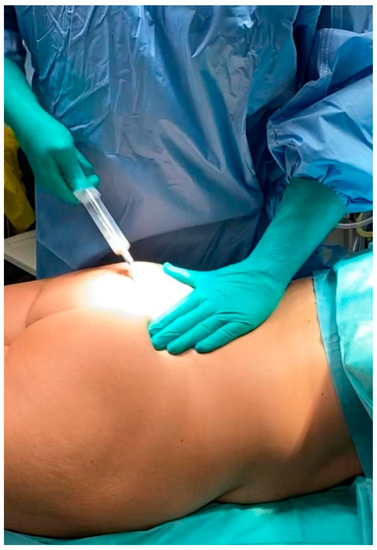 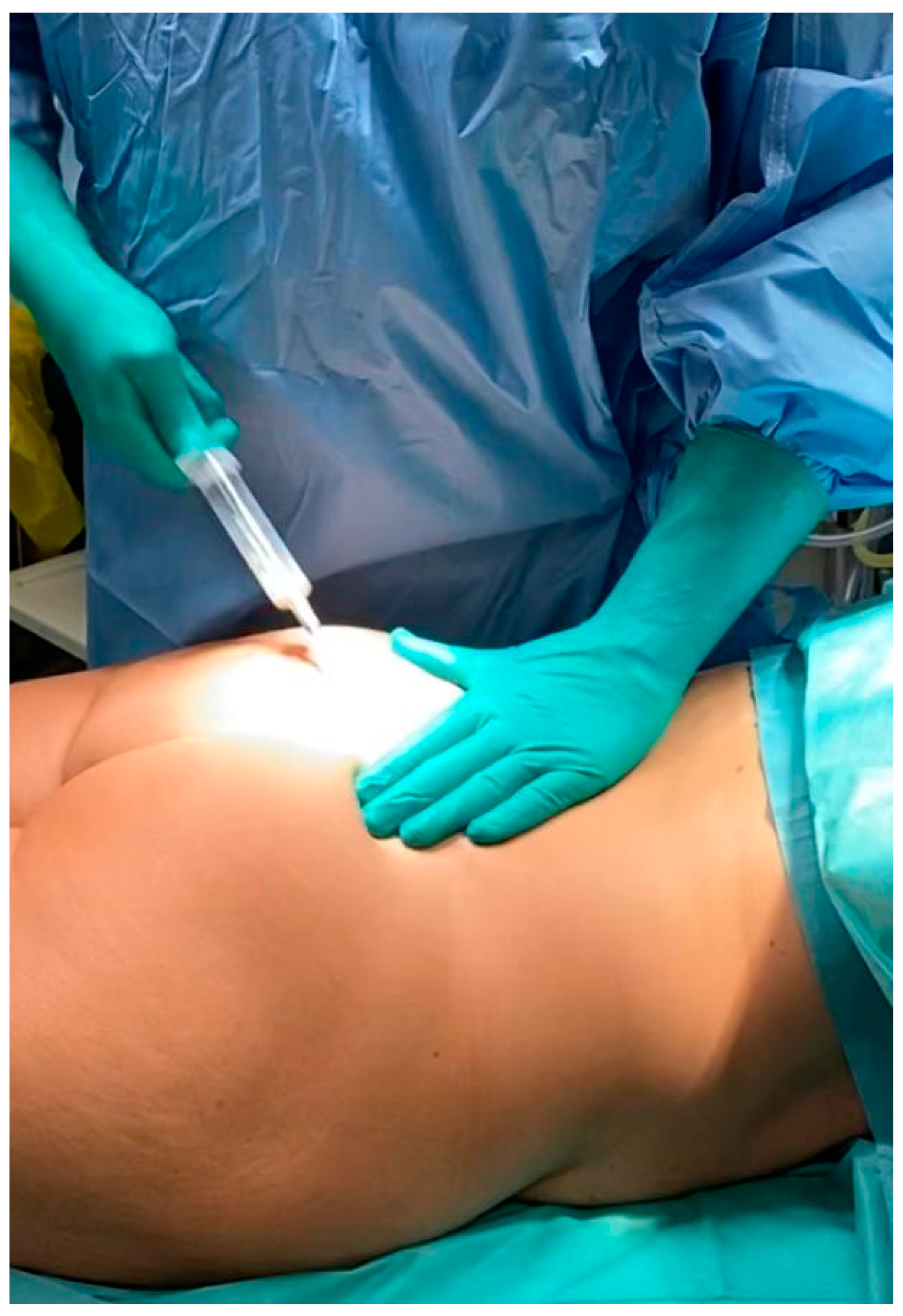 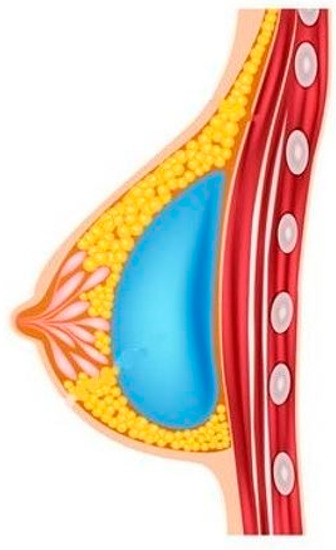 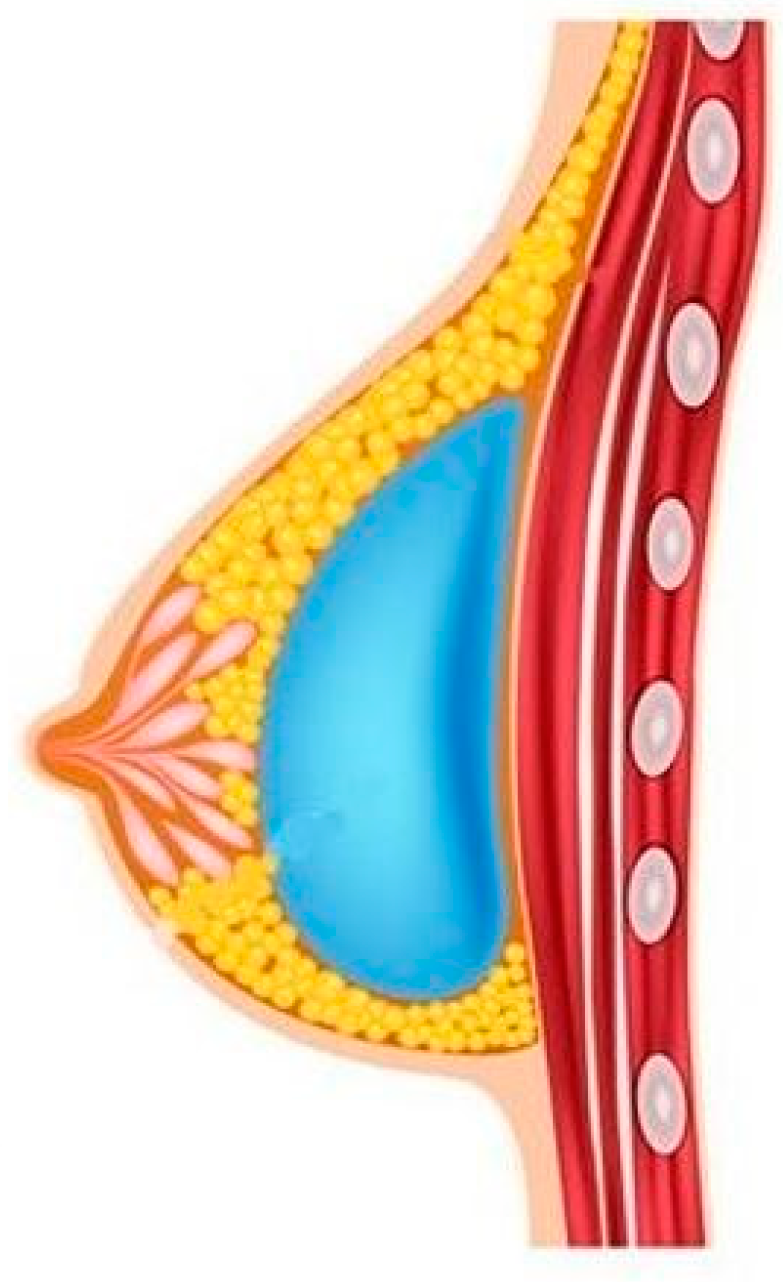 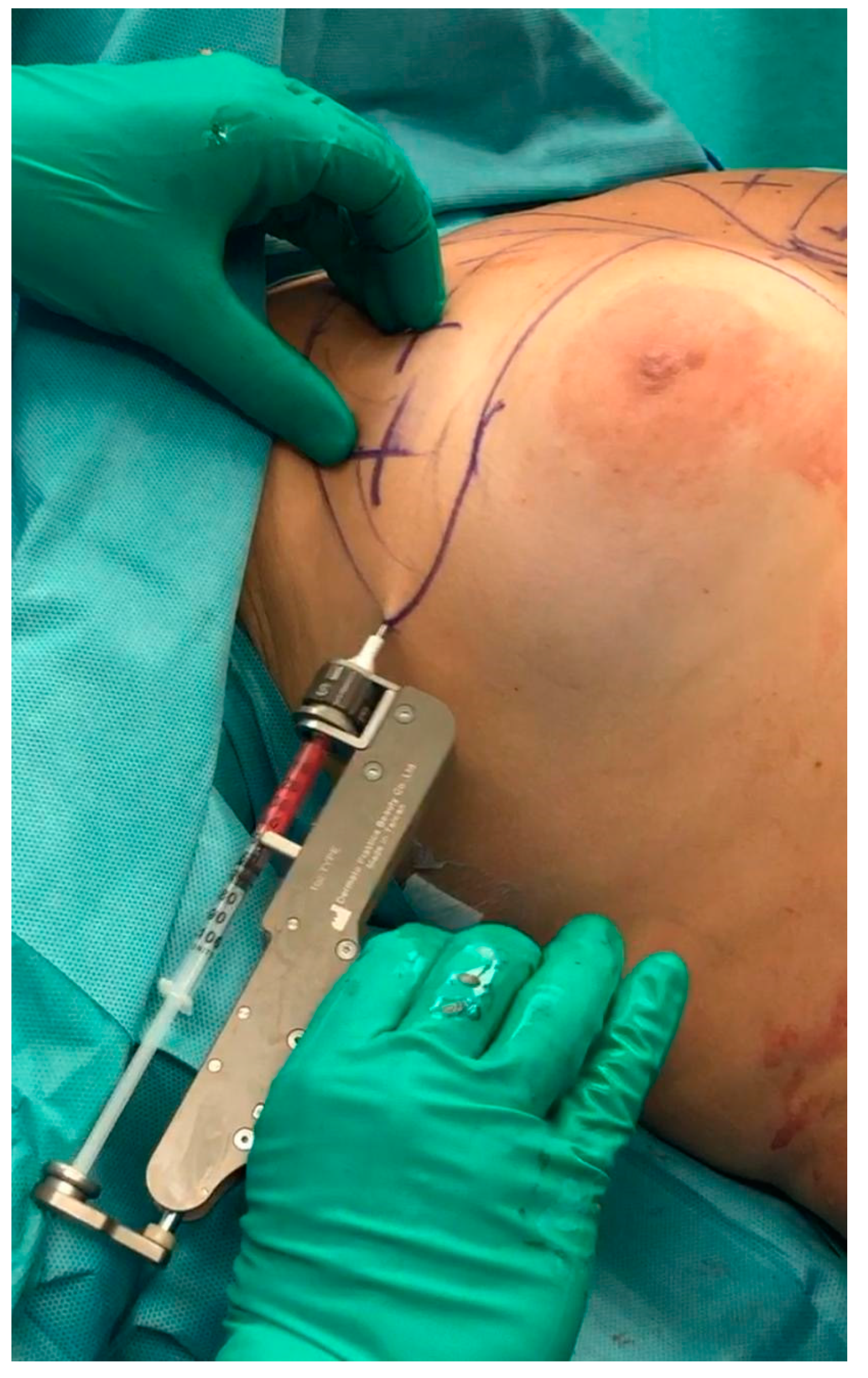 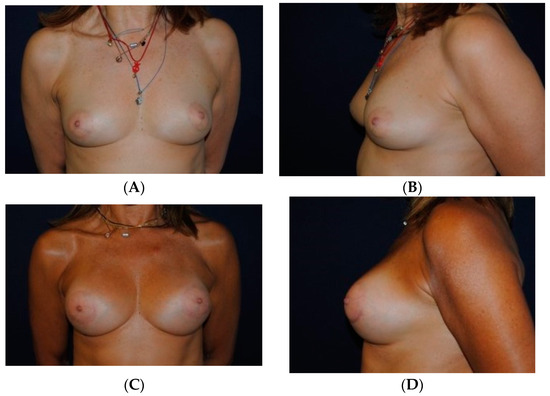 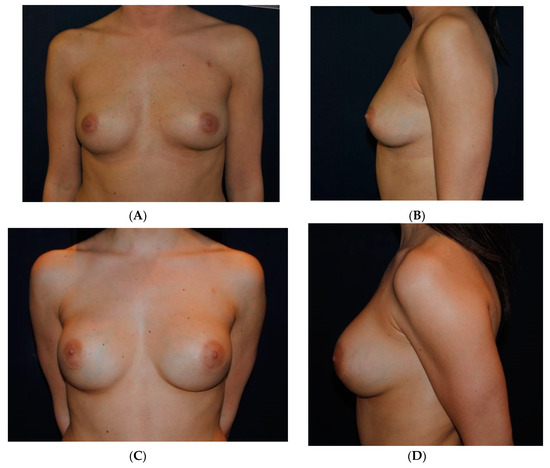 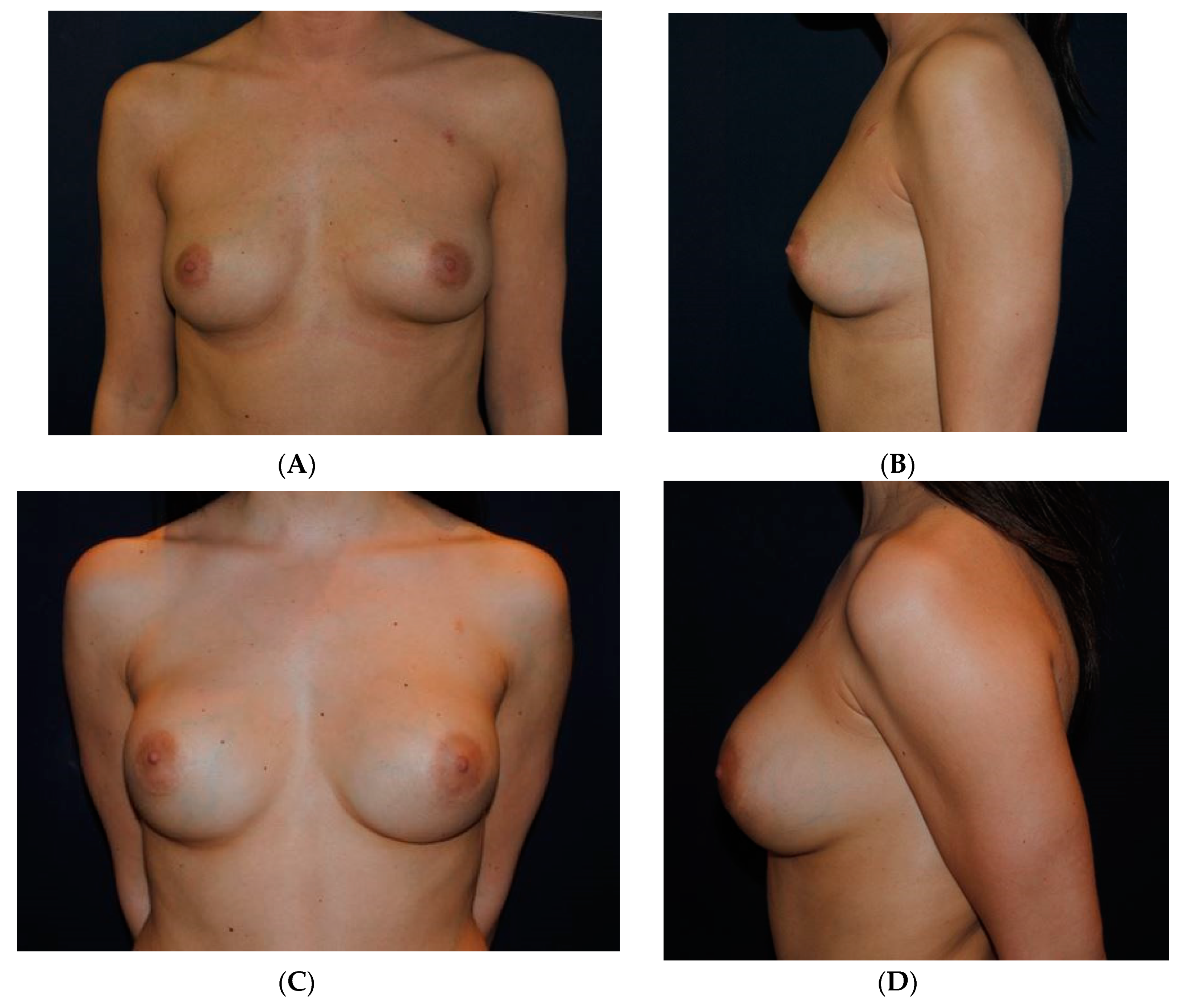