Survey of the Extent of the Persisting Effects of Methylmercury Pollution on the Inhabitants around the Shiranui Sea, Japan
Previous Article in Special Issue

Poor water quality has been reported along with a variety of negative health outcomes in the Saharawi refugee camps in Algeria. We assessed the concentration of elements in drinking water and urine in refugee women and children. Twenty-four samples of distributed public drinking water were collected, along with urine samples from 77 women and 296 children. Using inductively coupled plasma mass spectrometry, we analyzed water and urine for 31 and 10 elements, respectively. In addition, the water samples were analyzed for five anions by ion-exchange chromatography. Data were described according to two areas: zone 1 with purified water and water with naturally better quality, and zone 2 with only partially purified water. Most elements in drinking water had significantly higher concentration in zone 2 compared with zone 1. Sodium, chloride, nitrite, and nitrate were the parameters that exceeded the WHO Guidelines for Drinking Water Quality. Among both women and children, urinary concentration of vanadium, arsenic, selenium, lead, iodine, and uranium exceeded reference values, and most of the elements were significantly higher in zone 2 compared to zone 1. Even though water purification in the Saharawi refugee camps has increased during the last years, some elements are still exceeding the WHO guidelines for drinking water quality. Moreover, urinary exposure of some elements exceeded reference values from the literature. Further effort should be made to improve the water quality among the Saharawi refugees. View Full-Text
Keywords: drinking water; urine; trace elements; chemical elements; thyroid dysfunction drinking water; urine; trace elements; chemical elements; thyroid dysfunction
►▼ Show Figures 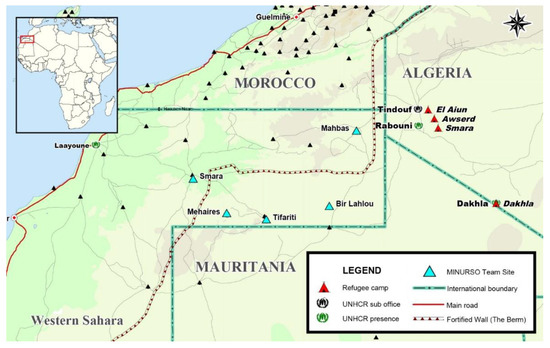