Can the Palatability of Healthy, Satiety-Promoting Foods Increase with Repeated Exposure during Weight Loss?

Repeated exposure to sugary, fatty, and salty foods often enhances their appeal. However, it is unknown if exposure influences learned palatability of foods typically promoted as part of a healthy diet. We tested whether the palatability of pulse containing foods provided during a weight loss intervention which were particularly high in fiber and low in energy density would increase with repeated exposure. At weeks 0, 3, and 6, participants (n = 42; body mass index (BMI) 31.2 ± 4.3 kg/m2) were given a test battery of 28 foods, approximately half which had been provided as part of the intervention, while the remaining half were not foods provided as part of the intervention. In addition, about half of each of the foods (provided as part or not provided as part of the intervention) contained pulses. Participants rated the taste, appearance, odor, and texture pleasantness of each food, and an overall flavor pleasantness score was calculated as the mean of these four scores. Linear mixed model analyses showed an exposure type by week interaction effect for taste, texture and overall flavor pleasantness indicating statistically significant increases in ratings of provided foods in taste and texture from weeks 0 to 3 and 0 to 6, and overall flavor from weeks 0 to 6. Repeated exposure to these foods, whether they contained pulses or not, resulted in a ~4% increase in pleasantness ratings. The long-term clinical relevance of this small increase requires further study. View Full-Text
Keywords: pulses; palatability; repeated exposure; weight loss pulses; palatability; repeated exposure; weight loss
►▼ Show Figures 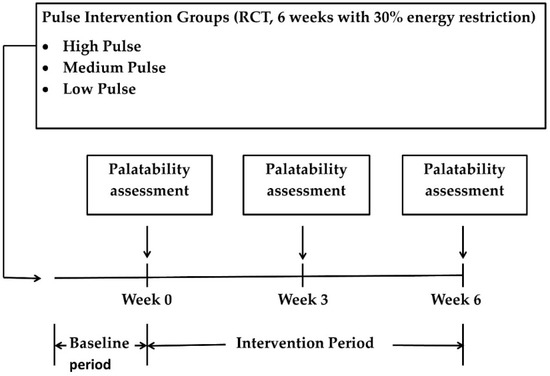