The Composition and Biological Activity of Honey: A Focus on Manuka Honey

Honey has been used as a food and medical product since the earliest times. It has been used in many cultures for its medicinal properties, as a remedy for burns, cataracts, ulcers and wound healing, because it exerts a soothing effect when initially applied to open wounds. Depending on its origin, honey can be classified in different categories among which, monofloral honey seems to be the most promising and interesting as a natural remedy. Manuka honey, a monofloral honey derived from the manuka tree (Leptospermum scoparium), has greatly attracted the attention of researchers for its biological properties, especially its antimicrobial and antioxidant capacities. Our manuscript reviews the chemical composition and the variety of beneficial nutritional and health effects of manuka honey. Firstly, the chemical composition of manuka honey is described, with special attention given to its polyphenolic composition and other bioactive compounds, such as glyoxal and methylglyoxal. Then, the effect of manuka honey in wound treatment is described, as well as its antioxidant activity and other important biological effects. View Full-Text
Keywords: manuka honey; polyphenolic composition; wound treatments; antimicrobial activity manuka honey; polyphenolic composition; wound treatments; antimicrobial activity
►▼ Show Figures 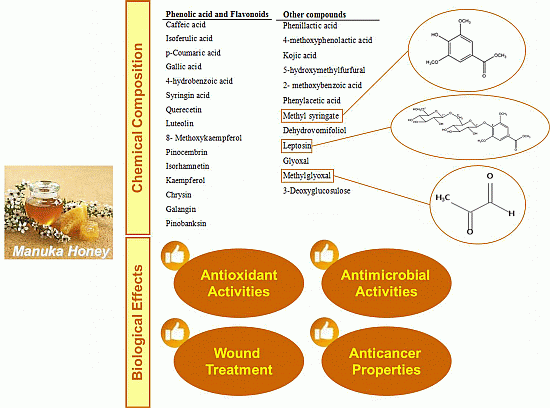