The Potential of Olive Leaf Extract as a Functional Ingredient in Yoghurt Production: The Effects on Fermentation, Rheology, Sensory, and Antioxidant Properties of Cow Milk Yoghurt

Background: Yoghurt has been traditionally consumed for its high nutritional value and health-promoting benefits. The addition of plant extracts as a source of phenolic compounds and bio-flavonoids has attracted much attention recently since milk and dairy products are deficient in these health-protecting components. Accordingly, olive leaf extract (OLE) has been considered due to the presence of bioactive compounds, primarily polyphenols. Thus, the aim of this research was to investigate the possibility of adding OLE into cow milk yoghurt as a potential functional ingredient. Methods: Yoghurts enriched with OLE (1.5, 3, and 5% v/v) were produced and compared with yoghurt without OLE. In all samples acidity, viscosity, colour, syneresis, water holding capacity (WHC), microbiological parameters, sensory properties, total phenols, and antioxidant activity (DPPH and FRAP methods) were determined. Results: The addition of OLE resulted in shorter fermentation and lower pH, but it had no adverse effect on the viability of yoghurt starter bacteria. OLE-enriched yoghurts showed increased syneresis, higher total phenols content, and antioxidant activity, while WHC and viscosity decreased. Sensory properties were slightly poorer for yoghurts containing higher OLE concentrations. Considering all of the obtained results, the addition of 1.5% OLE appeared to be optimal. View Full-Text
Keywords: yoghurt; antioxidant activity; olive leaf extract; phenolic compounds; sensory properties; syneresis; viscosity; microbiological quality yoghurt; antioxidant activity; olive leaf extract; phenolic compounds; sensory properties; syneresis; viscosity; microbiological quality
►▼ Show Figures 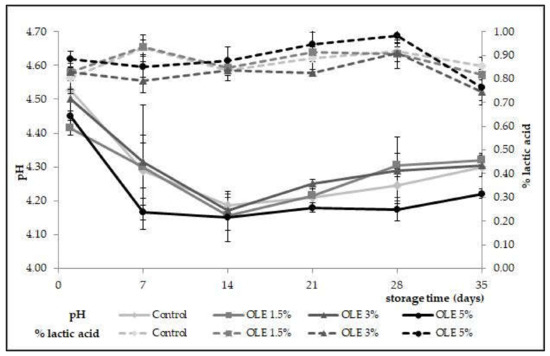