The Evolution of the Concept of Semantic Web in the Context of Wikipedia: An Exploratory Approach to Study the Collective Conceptualization in a Digital Collaborative Environment
Previous Article in Journal

Developing a Business Plan for a Library Publishing Program

Women’s Studies in the Muslim World: A Bibliometric Perspective

This study investigates the scientific outputs made by scholars residing in Muslim countries in the field of Women’s Studies as represented in the Web of Knowledge between 1900 and 2016. Focusing on countries whose population was at least 50% Muslim, we found 741 publications in this field. However, scholars in 16 out of 49 (32.65%) Muslim countries did not publish any works in Women’s Studies. Although the first work appeared in 1977, an exponential increase in the number of such publications was seen from 2008 on. Most of the articles were written by scholars in Turkey (188, 30.9%), followed by those in Malaysia (59, 9.7%), Nigeria (51, 8.4%), Lebanon (43, 7.07%), Bangladesh (42, 6.91%), and Iran (40, 6.58%) in the fields of Public, Environment & Occupation Health (37.1%), General Internal Medicine (17%), Obstetrics Gynecology (17%), and Psychology (9.4%). The most frequently used words in the titles and abstracts and as keywords were women, women’s, Turkey, gender, violence, and health. We predict that the number of such publications will continue increasing in the coming years. View Full-Text
Keywords: Women’s Studies; Muslim countries; Bibliometrics; Web of Knowledge; corpus linguistics Women’s Studies; Muslim countries; Bibliometrics; Web of Knowledge; corpus linguistics
►▼ Show Figures 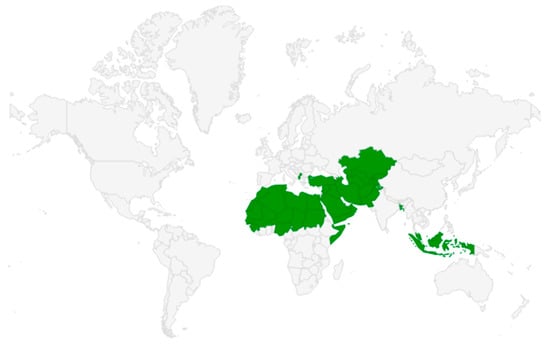