The color of dental restorative material should be maintained throughout its functional lifetime in an oral environment. However, the frequent use of mouthwash may affect the color stability of these composite restorations. The aim of this study is to assess the effects of using various mouthwashes on the color stability of various dental restorative composite materials. For this purpose, four mouthwashes/gels (Flocare gel (0.4% stannous fluoride), Pascal gel (topical APF fluoride), Pro-Relief mouthwash (sodium fluoride), and Plax Soin mouthwash (sodium fluoride)), and distilled water as a control, were selected. These were divided into five groups: Group 1: Flocare gel; Group 2: Pascal gel; Group 3: Pro-Relief mouthwash; Group 4: Plax Soin mouthwash; and Group 5: distilled water (control). Prepared restorative materials samples were immersed in the groups of mouthwashes/gels and the distilled water (control) for 24, 48, and 72 h. The discoloration that all materials exhibited with all immersion groups was significantly different at each of the three time periods for all groups (p < 0.05). Results from immersion in Flocare gel, Pascal gel, Pro-Relief mouthwash, and Plax Soin mouthwash were statistically significant (p < 0.05). The color change chroma was not significant for Pro-Relief and Plax Soin mouthwash (p > 0.05). Mouthwashes/gels affect color shifting for all composite resin materials, and changes are exaggerated over time. However, discoloration effects are not perceptible to the human eye.
Keywords: composite resin; Flocare gel; aesthetic restoration; preventive mouthwashes composite resin; Flocare gel; aesthetic restoration; preventive mouthwashes

Patient awareness of dental aesthetics has been increasing for several years. Therefore, the demand for aesthetic restoration depends upon the reproduction of tooth shape and shade, as well as on maintaining the selected color throughout the restoration’s functional lifetime in the oral environment [1]. Recently introduced tooth-colored restorative material has been widely used to restore cavitated lesions in order to satisfy patients’ aesthetic demands [2]. However, after restorations, the frequent use of mouthwash could affect the color stability of these composite resin restorations [3].
Color translucency and opalescence are optical properties required for natural appearance [4,5]. The clinical performance of dental resin composites has been significantly improved in recent decades through innovations using nano-fillers to produce adequate strength and excellent wear resistance along with retaining translucency [2,6]. It is generally believed that a reduced filler size will increase resistance to discoloration, but one recent study showed that filler size did not affect color stability [7]. Moreover, hybrid resin composites have better color stability compared to nano-filled composites [8,9]. Discoloration of composite resin filling materials may be caused by several intrinsic and extrinsic factors [10]. Discoloration of composite resin restorations may occur from time to time, and these color changes may lead to replacing restorations due to their unacceptability to patients [11]. Extrinsic factors causing discoloration of resin composites include staining by adsorption or absorption of colorants from exogenous sources such as coffee, tea nicotine, beverages, and mouthwash [12]. In addition, the physical properties of finished composite materials (such as surface roughness) may influence staining behaviors [13].
In order to prevent dental caries and periodontal diseases, a number of preventive remedies, including fluoride application [14,15] and bactericidal agents such as chlorhexidine [16,17,18], are commonly used. Antimicrobial mouthwashes are used to control dental plaque, dental caries, and periodontal disease [9,19]. However, the frequent use of mouthwash may have adverse effects, although, despite the increased use of mouthwash, researchers have reported a limited effect on color changes of the composite resin [20]. Tooth-colored restoration materials are widely used in dental practice to meet patients’ aesthetic demands. Different types of composite resin with different physical characteristics are available on the market. They are classified by particle size, shape, and distribution of fillers [21]. Filler size has been progressively reduced to provide smoother surface textures that in turn result in optimized optical properties [22,23]. Ideally, restorative materials should not change in color or appearance, but a degree of color change can be caused by a number of factors, including incomplete polymerization, water sorption, chemical reactivity, oral hygiene, and the surface smoothness of the restoration [24]. Furthermore, saliva, food components, different drinks, beverages, and mouthwashes may affect the color of provisional restorations. The aim of this study is to assess the effects of using various mouthwashes/gels and mouthwashes on the color stability of various dental restorative composite materials. This study compares five different resin composite materials for total color difference for various aging times.

A total of 125 specimens of the aesthetic restorative materials were prepared and randomly distributed for each study group (n = 30) and control group (n = 5). The preparation of the specimens was completed using Teflon molds and light curing, following the manufacturer’s instructions. Each Teflon mold was placed on a glass microscope slide and overlaid with a 22 × 22 mm cover glass (BDH Borosilicate glass) placed at each open end of the mold to act as a separator. The function of the glass slide was to provide compaction of the materials into a flat surface and to act as a separator. The step-wise method of layering was used for the preparation of the composite resin dental restorative filling material specimens, and the compacting of the material was made with a plastic spatula, after which the restorative filling material was irradiated with a 20 s pulse from a light-curing unit light emitting diode (LED) unit (3M ESPE Dental Products D-82229 Seefeld, Germany). The mold was completely filled with material using this step-wise method and was irradiated at each stage with 20 s light pulses according to the manufacturer’s instructions. The final specimen dimensions were discs with an 8 mm internal diameter and a 3 mm height. The specimens were polished with 3M Sof-Lex discs to obtain a clinical finish and stored in distilled water for 24 h at 37 °C before initial color assessment.

4.3. Immersion of the Specimens

Standard immersion solutions were prepared for all groups. The specimens were immersed in the preventive mouthwash agents and distilled water (control) at 37 °C, in different groups, to evaluate the color stability of the different tested composite resin restoration materials for periods of 24, 48, and 72 h, which is equivalent to 2 min of mouthwash per day for two, four, and six years. Twelve hours of immersion simulate one year of rinsing [28]. Throughout the study, all specimens in the groups were shaken on an orbital rotational table every 3 h to provide homogeneity.
After thoroughly rinsing each specimen for 120 s with tap water, all specimens were stored in distilled water in a wide mouth dark bottle. The baseline colors for all specimens were calculated using a colorimeter (Minolta CR; Minolta Co., Osaka, Japan) using Commission International de Eclairage (CIE) [9,38] L*, a*, and b* relative to standard illumination A; therefore, a white background was used, and color differences were tested. The colorimeter was calibrated following the manufacturer’s instructions prior to the measurement session, using a white calibration standard. The L* value refers to lightness, which ranges from zero for black to 100 for white, while the chromaticity values are a* and b*, coordinates in the axis of red–green and yellow–blue, respectively. Positive b* values are in the range of yellow and negative values indicate blue. Positive a* values means the color shifts towards red, and the negative values mean the color shifts towards blueness. After 24, 48, and 72 h, all specimens were removed from the immersion solution and flushed with running tap water. Excess fluid on the surface of the specimens was removed gently with tissue papers. After color measurements at each time interval, all specimens in each group were re-immersed in fresh solution. The quantitative evaluation of color difference with a colorimeter confers advantages such as repeatability, sensitivity, and objectivity, despite some limitations. Discoloration can be evaluated with different instruments and techniques.
For chromatic differences assessment, the CIE L*, a*, b* system was used. According to this system, L* represents the lightness of the sample, a* describes the green–red axis [−a = green; +a = red], and b* describes the blue–yellow axis [−b = blue; +b = yellow]. It is also possible to calculate the total color changes [ΔE*ab], which considers changes in L*, a* and b*. Variable thresholds of color difference values were reported that are perceptible to the human eye. However, for dental restorative materials, the clinically acceptable value for color changes is set at ΔE*ab ≤ 3.3 [39,40].
The color measurements were repeated five times for each specimen: before immersion (baseline) and after the elapsed immersion times of 24, 48, and 72 h. The color differences ΔE*ab were computed from the mean values of ΔL*, Δa*, and Δb* for each specimens of the tested composite resin material in all groups, using the following equation [5,9,41]:
ΔE*ab = [(ΔL*)2 + (Δa*)2 + (Δb*)2]1⁄2.
The ΔL*, Δa*, and Δb* values are differences in the L*, a*, and b* values from baseline after immersion for each interval time (24, 48, and 72 h).
The mean calculated data of the specimens of each composite resin material after immersion with the preventive mouthwashes and gels, as well as of the control groups, at different elapsed times, were statistically analyzed. The mean values of ΔE*ab and Δb* for the materials at different immersing times were compared statistically by one-way analysis of variance (ANOVA) followed with the multiple comparisons test and the Tukey’s test. The significance level was considered as p < 0.05.

All the mouthwashes/gels used in this study affected the color shifting of all composite resin materials, which increased with aging time. The total color difference ΔE*ab was significant for the discoloration of all materials within all preventive agent groups, but changes were not visually perceptible except for the Empress Direct IPS material in the Pro-Relief and Plax Soin mouthwashes, where changes were perceptible and clinically unacceptable due to sodium fluoride (Groups 3 and 4). However, the stannous fluoride and APF (Groups 1 and 2) resulted in discoloration effects that may not be perceptible and are therefore clinically acceptable. The Δb* value for all materials aged with mouthwashes/gels discolored towards blueness, except for Herculite XRV Ultra, which discolored towards yellowness, and the Empress Direct IPS material, which in in Pro-Relief preventive agent initially discolored towards the yellow axis but, with more immersion time, shifted from the yellow to the blue axis, showing adverse effects from sodium fluoride. 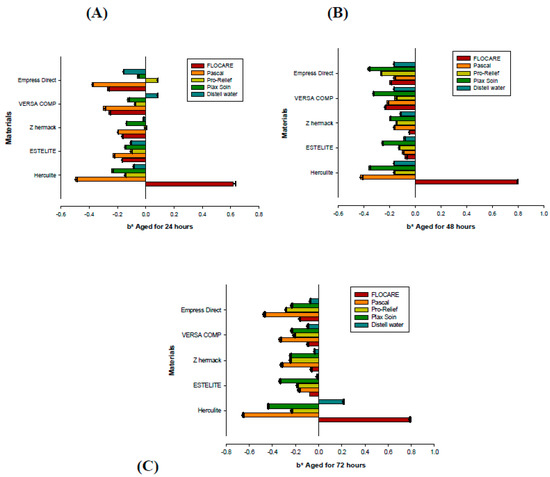 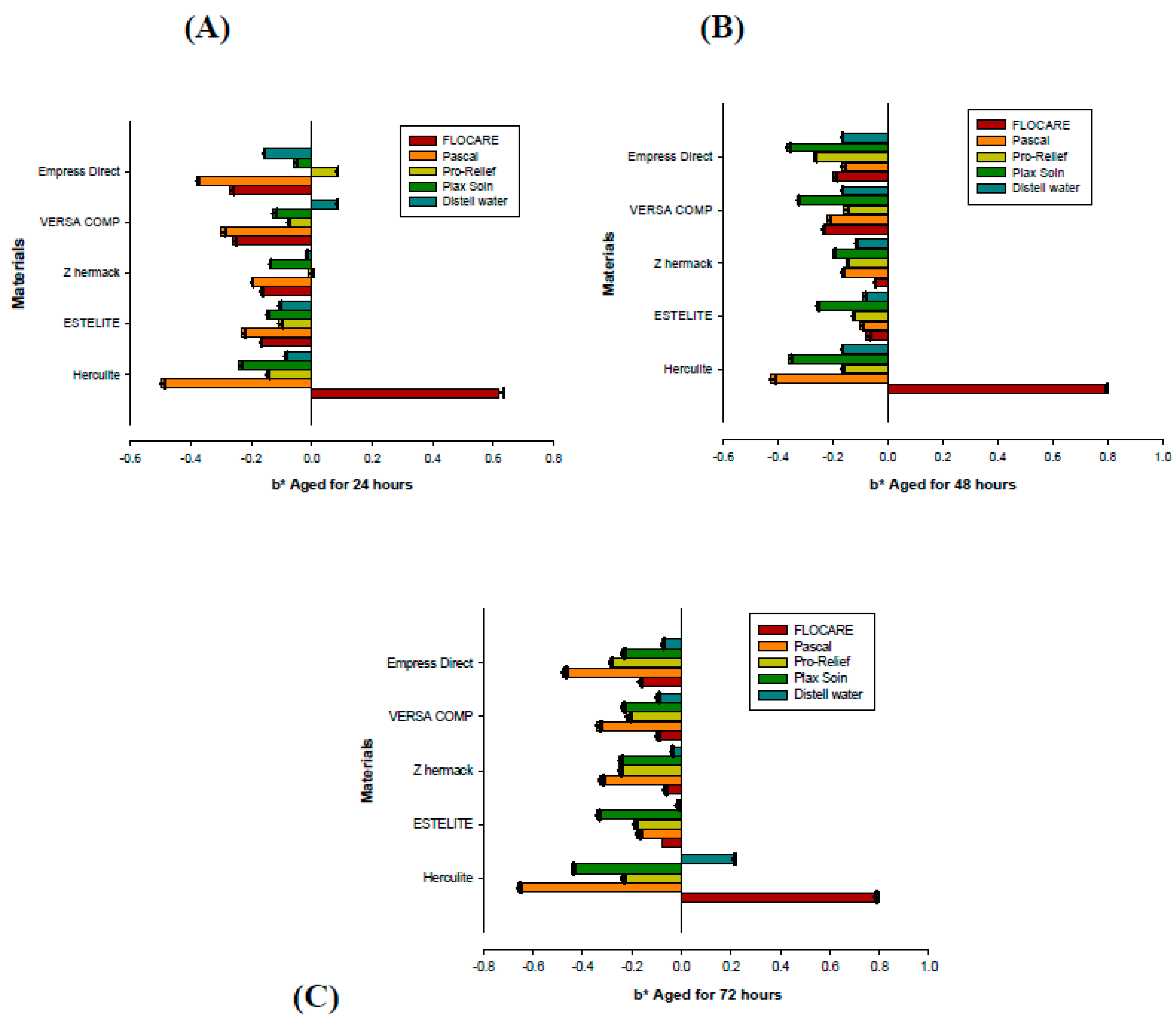