The optical Tamm state (OTS) particularly attracts the attention of researches among various surface localized optical states. This is a mode localized at the interface between two highly reflecting media, which exponentially decays to both of them. Two photonic crystal media having overlapping band gaps can act as such media [1,2]. The existence of surface states in this case is a consequence of the fact that a photonic crystal can act as a medium with negative permittivity and permeability [3]. The field decay inside the photonic crystal is caused by the Bragg reflection condition. Such a localized mode at the interface between two materials can be excited by both TE and TM linear polarizations at any light incidence angle. The OTS manifests itself in experiments as a narrow resonance in the transmittance or reflectance spectrum of the sample [1]. If one of the media is a metal, the OTS is called a Tamm plasmon [4]. The interest in the OTSs and Tamm plasmons is due to their possible applications in lasers and emitters [5,6,7,8], sensors [9,10], photovoltaic devices [11], etc. Recently, Cheng et. al. demonstrated a liquid crystal-tuned Tamm-plasmon resonance device [12].
The OTSs can be strongly coupled with each other or with resonances of a different nature, including cavity modes, exciton polaritons and surface plasmons [13,14,15,16,17]. Such hybrid modes are characterized by anticrossing of the resonances upon tuning a position of one of them.
It seems promising to use a soft material as a photonic material. Cholesteric liquid crystals (CLCs) are the well-proven elements of optical systems. These are birefringent materials with the chirality property. The alignment of extended CLC molecules is characterized by a continuously-rotating director. Similar to one-dimensional photonic crystals, cholesterics have a photonic band gap [18]. However, the position and width of their band gap can be easily changed using external factors. In contrast to scalar photonic-crystal materials or distributed Bragg reflectors, CLCs have only band gap at the normal incidence of light. This band gap only exists for light with the diffracting circular polarization coinciding with the twisting of a cholesteric helix. The circularly-polarized radiation of the opposite direction (nondiffracting polarization) is not reflected from such a structure.
In contrast to the case of metals or conventional dielectrics, the circularly-polarized radiation reflected from the CLC preserves the sign of its polarization handedness. Therefore, obtaining a Tamm plasmon localized between the CLC and metallic layer or the OTS localized between the CLC and distributed Bragg reflector is a challenging problem. It can be solved in two ways. The first way is to use an additional anisotropic layer, e.g., a quarter-wave phase plate [19,20], an oppositely-twisted CLC [21] or a planar anisotropic defect in the CLC [22]. In this case, however, the observed localized states are not called Tamm states. The other way is to use a polarization-preserving (handedness-preserving or chiral) mirror instead of a conventional one. These mirrors retain not only the handedness, but also the ellipticity magnitude upon reflection. The state at the polarization-preserving mirror-CLC interface was described in the low [23] and finite [24] anisotropy approximations of a cholesteric crystal and named a chiral OTS. The metasurfaces can have the properties of handedness-preserving mirrors [25].
In this work, we examine the coupling between two chiral OTSs localized at both CLC boundaries.

The system under study is presented in Figure 1. The right-handed CLC is sandwiched between two identical polarization-preserving anisotropic mirrors (PPAMs). The CLC parameters used in the simulation were ordinary and extraordinary refractive indices of and and a helix pitch of m.These parameters are typical of the mixture of a Merck S-811 chiral additive and a nematic liquid crystal [26]. The CLC layer thickness is specified by parameter d. To meet the boundary conditions, we hereinafter assume the CLC to have an integer number of periods (the period is a distance of the director rotation by angle ). The PPAMs consist of alternating uniaxial dielectric layers with refractive indices and . Each layer is rotated relative to the previous one by . The mirrors contain periods. The PPAM period thickness is m. As was shown previously, such anisotropic mirrors can preserve the polarization of the radiation falling onto them [27]. This is a necessary condition for forming the OTS at the CLC boundary. In [28], a chiral OTS was described at the CLC and PPAM interface. The angles between the CLC optical axes and adjacent mirror layers are hereinafter referred to as and , respectively. Below, we assume . The structure is surrounded by a medium with the refractive index equal to the averaged CLC refractive index .
We assumed the refractive indices to be and ; i.e., the CLC refractive indices are equal to the corresponding refractive indices of the PPAM layers. At these parameters, the centers of the CLC and PPAM band gaps coincide. As was demonstrated in [23,24], under this condition at , the OTS manifests itself in the spectrum exactly at the band gap center. At , the boundary conditions are satisfied, which leads to the possibility of exciting two OTSs localized at both boundaries of a confined CLC. Both OTSs are symmetric and therefore should appear in the spectrum at the same frequency; however, since these states are coupled through a finite CLC layer, the frequency degeneracy is eliminated, and two peaks arise in the spectrum at similar frequencies. At the integer number of CLC periods, the angle between the optical axes of the PPAM layers adjacent to the CLC from the left and right is . These layers are shown by different colors in Figure 1.

We demonstrated the existence of the modes caused by coupling of two chiral optical Tamm states localized at the interface between the CLC and anisotropic mirrors. The mirrors represent uniaxial layered structures, in which each layer is rotated by relative to the previous one. Such a structure is polarization-preserving. The need for these mirrors is caused by the polarization properties of the CLC. The investigated modes are only excited at the diffracting polarization of the incident light. As the CLC layer thickness decreases, the OTS frequency spectral split is predicted. The split value depends on the layer thickness. We found analytically and numerically the frequencies of the spectral manifestation of the chiral OTSs. Varying the angle between the CLC and PPAM optical axes, one can control the OTS coupling value, thereby tuning the transmittance spectrum of the structure. At the opposite circular polarization, which does not reflect from the CLC, the OTSs are not excited, and the system becomes analogous to a Fabry–Perot cavity filled with an anisotropic helical structure. The possible tuning of the spectra by external factors was discussed.

M.V.P. performed the calculations, visualized the results and drafted the manuscript. I.V.T. and N.V.R. helped with the software and methods and checked the analytical expressions. S.Ya.V. supervised the whole study and finalized the manuscript

This research was funded by the Russian Foundation for Basic Research, Government of Krasnoyarsk Territory, Krasnoyarsk Region Science and Technology Support Fund, to the research Project Nos. 17-42-240464 and 18-42-243025. 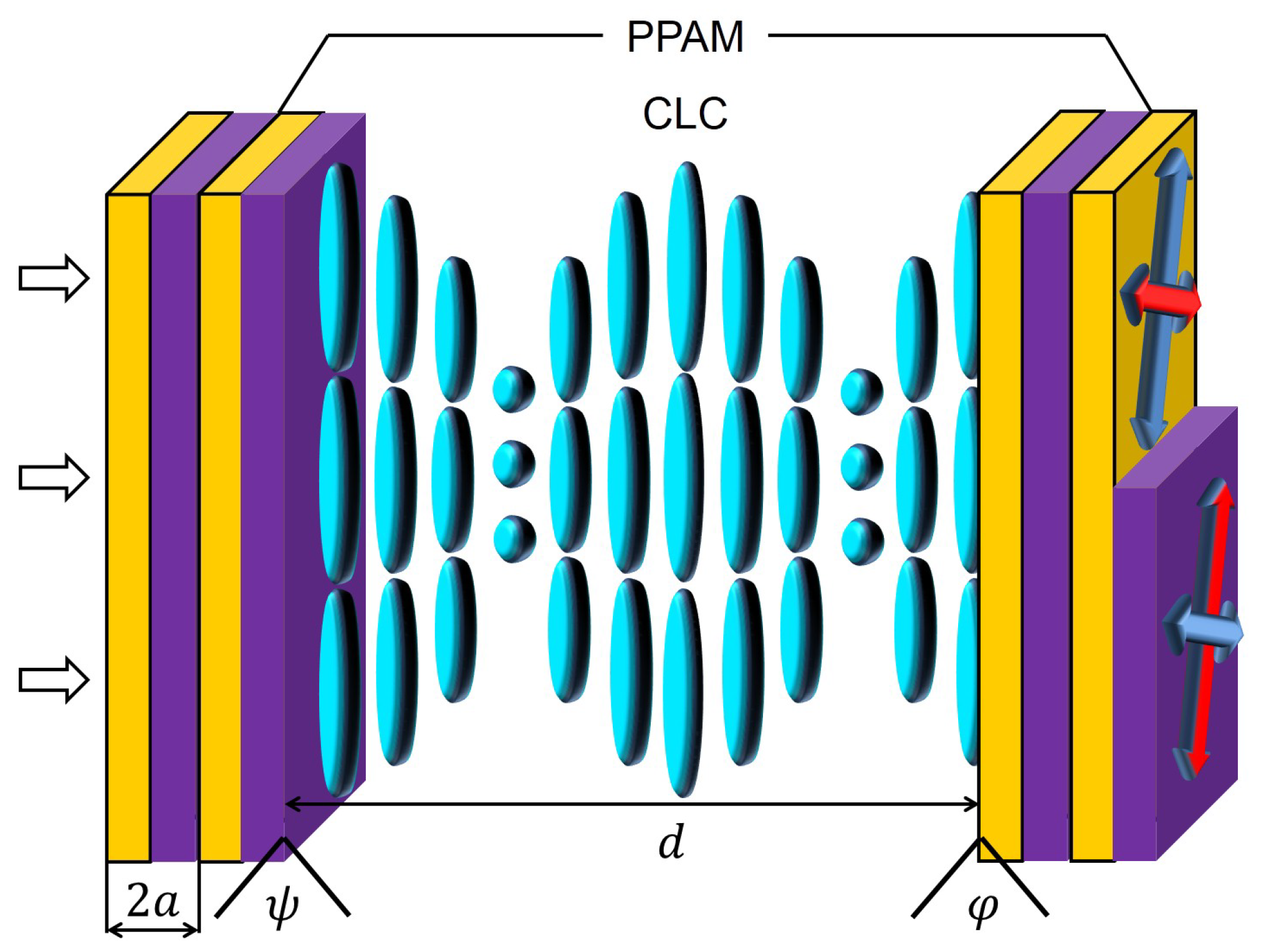 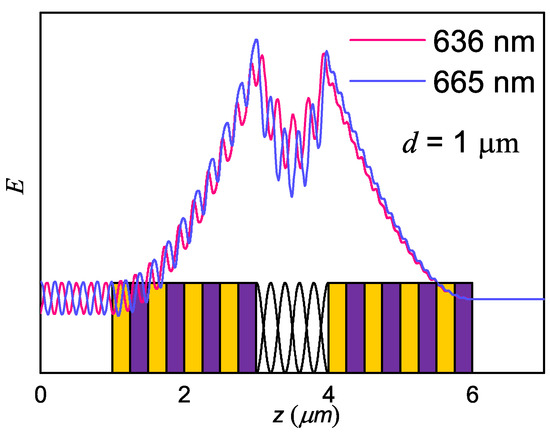