A special type of surface electromagnetic states in the form of a standing surface wave with the zero wavenumber along the interface between media, which does not transfer energy, have recently been in focus of researchers. In this case, the wave equation following from the Maxwell equations for an electric field is the exact analog of the one-electron Schrödinger equation for a semi-infinite crystal, the solution of which is the electronic Tamm state [1]. Therefore, the electromagnetic analog of the electronic Tamm state at the normal incidence of light onto a sample is called the optical Tamm state (OTS). If such a state exists at the interface between a photonic crystal (PhC) and a conducting medium with the effective permittivity < 0, the light wave interacts with a surface plasmon, i.e., the collective oscillation of the free electron gas at the conductor surface. The result of interaction between the radiation field and surface plasmon excitation is a Tamm plasmon polariton (TPP) [2], which is observed in experiments as a narrow peak in the energy spectra of a sample [3,4,5]. As was shown in [6,7,8,9,10], the materials with the negative permittivity ( < 0) adjacent to a PhC can be both metallic films and nanocomposites with the resonant frequency dispersion.
Theoretical and experimental investigations of the properties of TPPs allowed them to be used as the basis of a fundamentally new class of devices, including absorbers [11,12,13,14], switchers [15], organic solar cells [16], thermal emitters [17,18], sensors [19,20,21], and spontaneous radiation amplifiers [22]. The high degree of field localization at the TPP frequency makes it possible to reduce the threshold of generation of nonlinear effects [23,24,25] and implement the extremely high light transmission through a nanohole [26]. The interaction of the TPPs with other types of localized modes allows lasers [27,28], induced transparency [29], single-photon sources [30], and electro-optically tunable Tamm plasmon-polariton-excitons [31] to be obtained. In [32,33], we found the localized state in the structure containing a cholesteric liquid crystal. Later, a chiral analog of the TPP in a cholesteric liquid crystal was established [34]. In this case, the polarization-preserving anisotropic mirror made of a metal-dielectric nanocomposite was used as a metallic layer [35].
Of great interest are materials with the near-zero permittivity. Such structures are used to control the wave front shape [36]; enhance the transmission of light through a subwavelength aperture [37] and nonlinear effects [38,39]; develop absorbers [40], photonic wires [41], and insulators [42]; and perform the third-harmonic generation [43]. The materials with the near-zero permittivity involve layered plasmon structures, indium tin oxide (ITO), metal-dielectric, polymer nanocomposites, and composites with core–shell nanoparticles. In this work, we demonstrate the possibility of simultaneous implementation of the TPP and defect mode localized at the interface between a PhC and a nanocomposite with the near-zero effective permittivity [44]. The nanocomposite consists of metallic nanoparticles dispersed in a transparent matrix and has the resonant effective permittivity. The optical characteristics of initial materials have no resonant features [45,46,47]. The position of a frequency band corresponding to the near-zero effective permittivity is determined by the permittivities of initial materials and volume concentration of nanoparticles. This opens wide opportunities for guiding the optical properties of localized states.

2. Model Description and Determining the Transmittance

We consider a PhC structure in the form of a layered medium bounded by a nanocomposite layer with finite thickness (Figure 1). The PhC unit cell is formed of materials a and b with respective layer thicknesses and and permittivities and .
The nanocomposite layer with thickness consists of spherical metallic nanoparticles uniformly distributed in a dielectric matrix.
Hereinafter, we assume the PhC structure to be placed in vacuum.
The effective permittivity of the nanocomposite is determined using the Maxwell Garnett formula [48,49] widely used in studying matrix media, in which isolated metallic inclusions with a small volume fraction are dispersed in the matrix material where f is the filling factor, i.e., the fraction of nanoparticles in the matrix; and () are the permittivities of the matrix glass and nanoparticle metal, respectively; and is the radiation frequency.
The Maxwell Garnett model suggests the quasi-steady-state approximation. The model has the following specific features: the nanocomposite layer is electrodynamically isotropic and the size of inclusions and distance between them are much smaller than the optical wavelength in the investigated effective medium. We determine the permittivity of a nanoparticle metal using the Drude approximation where is the constant taking into account the contributions of interband transitions of bound electrons; is the plasma frequency; and is the reciprocal electron relaxation time.
The change in the light field upon its passing through each structural layer is determined by the transfer matrix method [50].

3.1. Fresnel Reflection from a Nanocomposite Film

The principle of defect mode formation can be explained using the coupled mode theory. According to this theory, the defect mode formation involves the contributions of three energy channels, each characterized by relaxation rate . The relaxation rate is equal to the ratio between the total power of energy relaxation and the energy accumulated in the defect mode. We denote the rates of energy relaxation to the transmission and absorption channels of the nanocomposite film and the transmission channel of the PhC by , , and , respectively. The energy accumulated in the defect layer is the same for determining the rate of relaxation to each channel. Therefore, the ratio between relaxation rates is determined by the ratio between powers of leakage to the channels and can be related to the energy coefficients of the structure as [18]:
In this case, the energy accumulated in the defect mode will be maximal under the critical coupling condition
The graphic verification of the validity of critical coupling conditions (10) at nanocomposite layer thicknesses of and 576 nm is illustrated in Figure 11.
Note that, at a wavelength of nm, the condition in Equation (10) is valid, while at nm, it is invalid. This can be explained by the low Q factor of the resonator mode at nm. In this case, the coupled mode theory allows the process to be only qualitatively, yet not quantitatively, described [53].
To check the validity of the critical coupling conditions for the TPP in the case of a PhC conjugated with the 341-nm thick nanocomposite, we write the expression analogous to Equation (10):
Analysis of the energy spectra of the structure showed that at the TPP from the nanocomposite film side, the condition in Equation (11) is not met because of the weak coupling of the incident radiation with the TPP (Figure 12).
However, the coupled mode theory makes it possible to estimate the reflectance value relative to the background radiation at the frequency of the TPP excited from the nanocomposite side:
The transfer-matrix results and coupled mode theory data are given in Table 1.
Thus, the coupled mode theory gives a good agreement with the transfer matrix method. 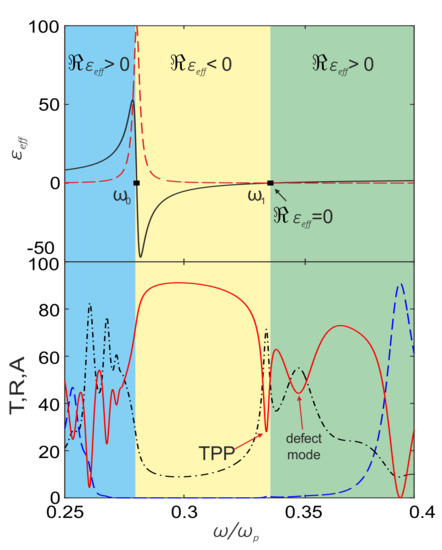 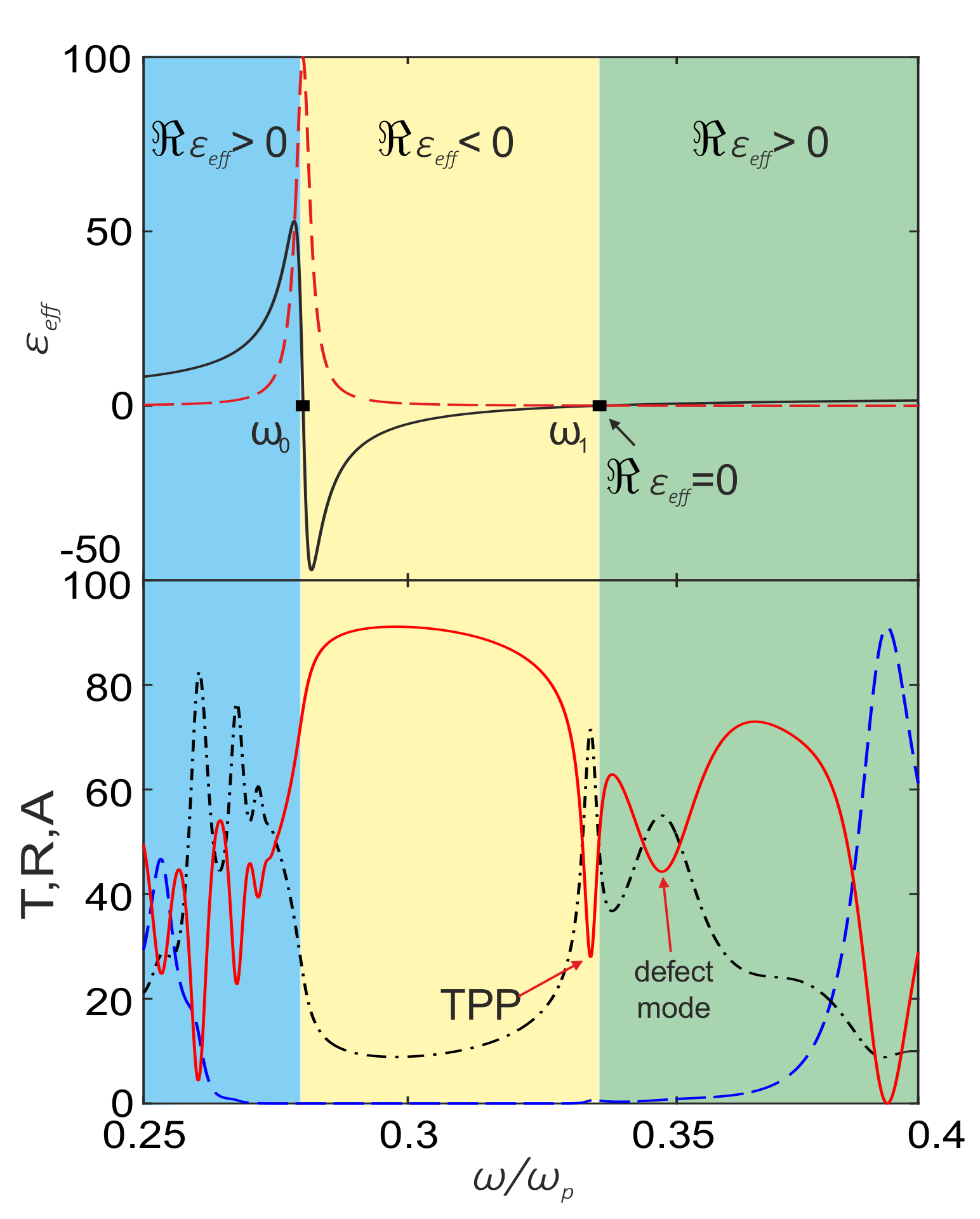 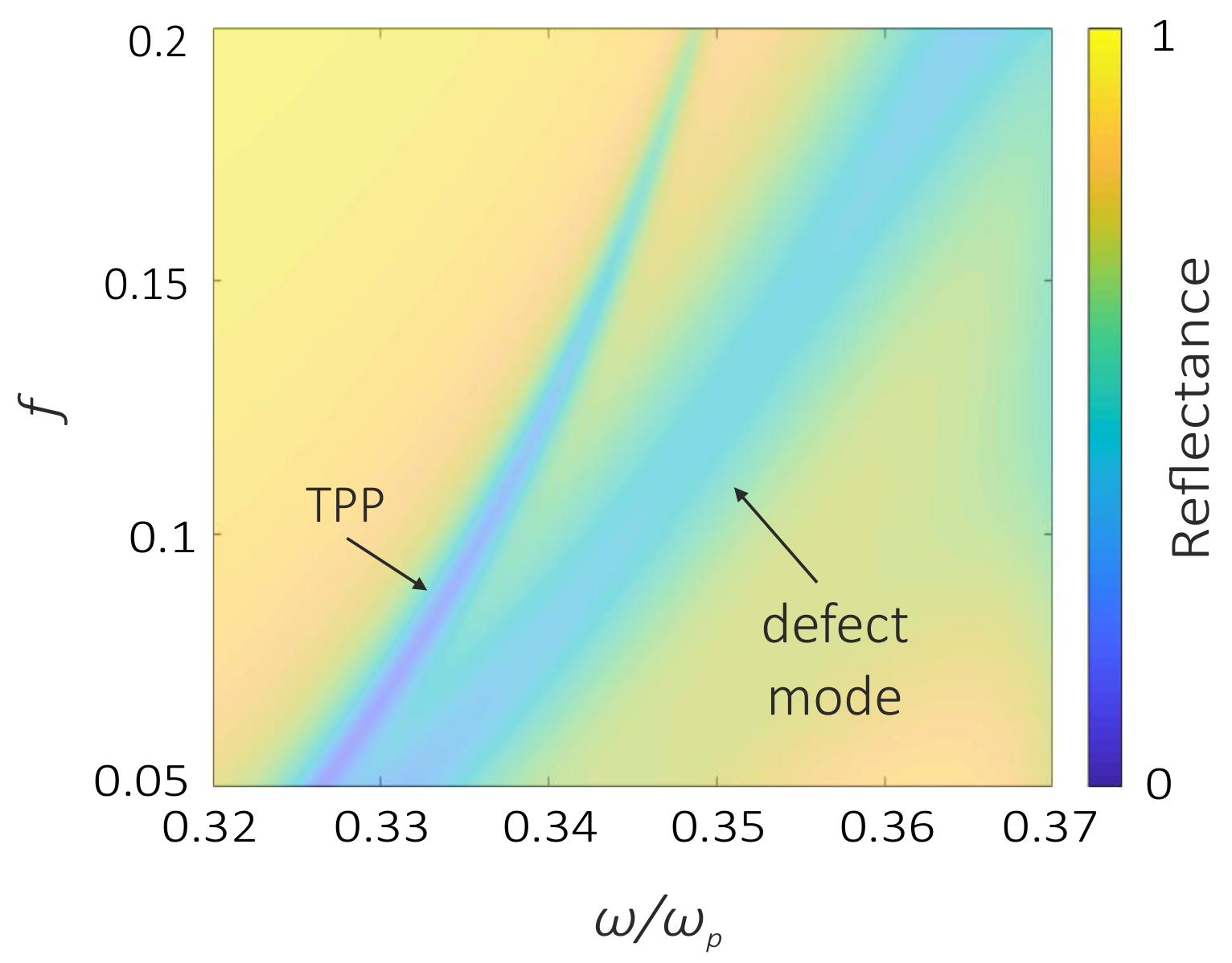 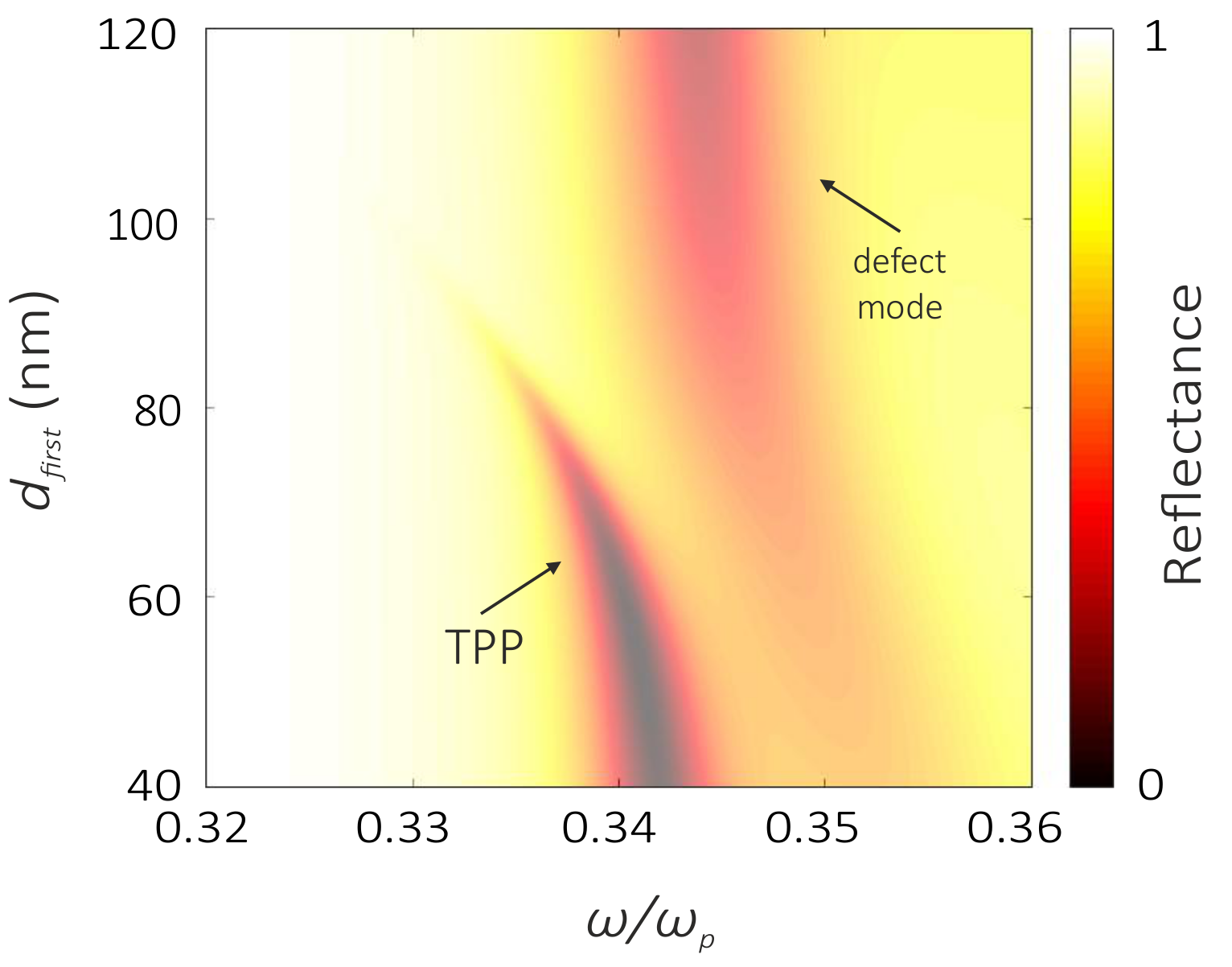