Numerical methods have been applied to model acoustic phenomena, and the development of computational acoustics allows the simulation of sound generation and propagation in a complex environment. Many classic numerical methods such as the finite difference method (FDM) [1], the finite element method (FEM) [2], the boundary element method (BEM) [3], and other modified methods [4,5], have been applied in spectral or temporal acoustic simulations. In particular, meshfree methods are widely applied to solve acoustics problems, because field points used in this method are arbitrarily distributed and the approximation smoothness order is chosen with flexibility. The method of fundamental solutions (MFS) [6], the multiple-scale reproducing kernel particle method (RKPM) [7], the element-free Galerkin method (EFGM) [8], and meshfree methods [9,10,11,12] are used to address certain acoustic problems, mainly in the frequency domain, and other methods like the equivalent source method (ESM) [13,14,15] solve problems in the time domain. Moreover, there is also a kind of method based on the fundamental solutions to realize the meshfree property, such as the singular boundary method [16,17,18].
The smoothed particle hydrodynamics (SPH) method, as a Lagrangian, meshfree particle method, was independently pioneered by Lucy [19] and Gingold and Monaghan [20], for solving astrophysical problems. As a Lagrangian approach, the SPH method has several advantages over the standard grid-based numerical method: (i) the numerical error generated by computing the advection is eliminated, since the advection term is included in the Lagrangian derivative; (ii) complicated domain topologies and moving boundaries are easily represented due to its Lagrangian property, as illustrated in recent reviews by Liu and Liu [21], Springel [22], and Monaghan [23]; (iii) the interface between different mediums can be naturally traced through the particle density, instead of using a special algorithm such as the volume-of-fluid; (iv) it is easy to implement and has a parallel processing ability, for the approximation is implemented in the local support domain instead of the whole computational domain [24,25]. Introducing the SPH method to acoustic computation can bring these advantages to this field.
Recently, the SPH method has been gradually used in acoustic computation, and some researchers have attempted to obtain the acoustic field through direct numerical simulation. Wolfe [26] simulated room reverberation with sound generation and reception, based on a SPH fluid mechanics algorithm, and Hahn [27] solved the fluid dynamic equations to obtain pressure perturbations during sound propagation. Both of these works can be seen as direct numerical simulations (DNS), based on the SPH method. However, for various acoustic waves in engineering problems, acoustic variables such as the variation in pressure, density, and velocity, are generally small. On the contrary, the values of pressure, density, and velocity exist on a much larger scale than any variation in these variables [28]. Acoustic wave equations are obtained based on the acoustic variables, to avoid solving fluid dynamic variables. Consequently, solving acoustic wave equations requires a lower computational burden compared to solving the fluid dynamic equations directly, and this approach is widely used in modeling engineering problems.
In our recent work, we proposed the use of the SPH method to solve acoustic wave equations, and tests on the sound propagation and interference simulation were conducted [29,30]. Some computational parameters were also discussed [31,32]. Based on these tests, the SPH method accurately solved acoustic wave equations, and some parameters were investigated, but only the traditional SPH method was used.
With the advancement of the SPH method, the traditional SPH method is modified or improved to reduce numerical error. Chen et al. [33,34] proposed the corrective smoothed particle method (CSPM) on the basis of Taylor series expansion in 1999. The CSPM is effective in reducing numerical error both inside the computational domain and around the boundary, so it has been used in different fields [35,36]. Other notable modifications or corrections of the SPH method include the reproducing kernel particle method [37], the finite particle method (FPM) [38,39], moving least square particle hydrodynamics (MLSPH) [40,41], and modified smoothed particle hydrodynamics (MSPH) [42]. The present study focuses on using the CSPM to improve the simulation accuracy of the SPH method for solving acoustic wave equations.
The implementation of boundary conditions in the SPH method is not as straightforward as in the grid-based numerical models. Historically, this characteristic has been regarded as a weak point of the particle method [43,44]. Several approaches have been proposed to treat boundary conditions for computational fluid dynamics. Among them, it is feasible to use virtual particles [45] to implement the boundary conditions. These virtual particles are allocated on and outside the boundary, as shown in several related works [46,47]. So far, a limited implementation of acoustic boundaries has been observed, and the rigid acoustic boundary developed from the solid boundary in fluid dynamics is shown in [26,27,29,30,31,32]. The boundary treatment technique for different acoustic boundaries is important for acoustic numerical analysis by the Lagrangian meshfree method.
The present paper is organized as follows: In Section 2, the CSPM formulations are provided to solve the acoustic wave equations. In Section 3, a hybrid meshfree-FDTD (finite difference time domain) method is proposed for acoustic boundary treatment. In Section 4, a sound propagation model is used to validate the CSPM algorithm, and the effects of different computational parameters are discussed. In Section 5, soft, rigid, and absorbing boundaries are used to simulate sound reflection and transmission, and numerical results are compared with theoretical solutions.

The kernel approximation of a function f(r) at particle i used in the SPH method can be written as a summation of neighboring particles, as: where f is a function of the position vector r, Wij = W(ri − rj, h), W is the smoothing kernel function, h is the smoothing length defining the influence area of the smoothing function, N indicates the number of particles in the support domain, mj is the mass of particle j, and ρj is the density. In the SPH convention, the kernel approximation operator is marked by the angle bracket < >.
The particle approximation for the derivative can be described as:
The present paper uses the cubic spline kernel function as the smoothing function. The cubic spline kernel is a widely used smoothing function which was originally used by Monaghan and Lattanzio [48]: where q = r/h; and in one-, two-, and three-dimensional space, αD = 1/h, 15/(7πh2), and 3/(2πh3), respectively.

In fluid dynamics, the governing equations for constructing SPH formulations are the laws of continuity, momentum, and state, which can be found in [49]. The Lagrangian form of the governing equations are: where ρ is the fluid density, v is the flow velocity, P is the pressure, t is time, and c is the speed of sound.
For most common acoustical problems, two assumptions are always used to simplify the question. On one hand, the medium is lossless and at rest. On the other hand, a small departure from quiet conditions occurs. In this work, the medium for sound propagation and reflection is ideal fluid, and the process is adiabatic. In addition, the sound pressure δp, the density change of particle δρ, and the particle velocity v are supposedly small, which can be expressed as:
When substituting these expressions into the continuity and momentum equations (Equations (4) and (5)), ignoring the viscosity and force, the equations are as follows:
Considering that ρ0 and p0 remain the same during the computation, they can also be expressed as:
Ignoring small quantities of first order, the Lagrangian form of the continuity and momentum equations governing the sound waves can be written as:
The state equation for ideal gas is written as:

2.3.1. Particle Approximation of the Continuity Equation

2.3.2. Particle Approximation of the Momentum Equation

2.3.3. Particle Approximation of the Equation of State

Particle approximation of the equation of state for ideal gas is:

The Taylor series expansion is used to improve the accuracy of the SPH method, which is known as CSPM. If a function f(r) is assumed to be sufficiently smooth in a domain that contains r, the Taylor series expansion for f(r) in the vicinity of ξ can be written as: where α, β = 1, 2, 3, represent different dimensional space and:
Multiplying both sides of Equation (22) by a smoothing function W, defined in the local support domain Ω of ξ, and integrating over the support domain, the following formulation can be obtained:
From the above equation, a corrective kernel approximation for function f(r) at ξ can be written as:
Replacing W(r − ξ, h) with W(r − ξ, h), a corrective kernel approximation for the first derivative of f(r) at ξ can be written as:
The particle formulations of Equations (26) and (27) are given as:
The second order leap-frog integration [50] is used in this paper to update the parameters, and an all-pair searching approach [49] is used to realize the neighbour particle searching. The code is developed from the SPH algorithm used in [51].

Sound propagation along ducts with different boundaries are discussed, as shown in Figure 2. In this model, sound propagates from x < 0 m to x ≥ 0 m, and the positive direction of the x-axis denotes the direction of sound propagation. The CSPM computational region is from −50 m to 150 m, and the propagation time is 0.25 s.
The sound pressure of the acoustic wave [54] in the ducts is written as: where t denotes time, x is the geometric position in the propagation direction, ω is the angular frequency of the sound wave, and k = ω/c0 is the wave number. In addition, the sound speed c0 = 340 m/s, and ω = 340 rad/s.

4.2. Verification of the Meshfree Algorithm

Table 1 lists the computational parameters that are used in the CSPM algorithm for sound propagation. The Courant-Friedriches-Lewy number is written as CCFL for short, and CCFL = u∆t/∆x.
In order to verify the algorithm, the CSPM algorithm is built to solve acoustic wave equations for sound propagation modeling. The costing central processing unit (CPU) time for the CSPM is 55.6 s, with the performance of computation measured on the Intel Core i3-3240 with RAM 4.00 GB (Gigabyte Technology Co., Ltd., New Taipei City, Taiwan). Then, the simulation results are compared to theoretical solutions, as shown in Figure 3. In this figure, solid lines demonstrate theoretical solutions, and points represent the CSPM simulation results. For clearly identifying different points, they are plotted at intervals of 14 grid points.
From the figure, it can be seen that several peaks and valleys appear in the graph between −50 m and 150 m. The algorithm is able to model the sound propagation process, and the CSPM simulation results are in good agreement with the theoretical solutions.

The sound reflection model with a rigid boundary at x = 150 m is built. Simulation results are compared to the theoretical solutions in Figure 7. Since the sound propagation process before reaching the boundary is the same as in the last section, Figure 7a and b only give the sound pressure of particles at t = 0.40 s and 0.80 s, respectively.
Figure 7 shows that the CSPM method predicts each peak of the sound waves to be almost the same as the theoretical solutions. The numerical simulation can correctly handle the process of sound propagation and reflection.

The Lagrangian meshfree-CSPM method is proposed, to improve the accuracy in solving acoustic wave equations, and different acoustic boundary conditions are implemented with a novel boundary treatment technique, based on the hybrid meshfree-FDTD method. The findings lead to the following conclusions:

This study was supported by the Independent Innovation Foundation of Huazhong University of Science and Technology (No. 01-18-140019). 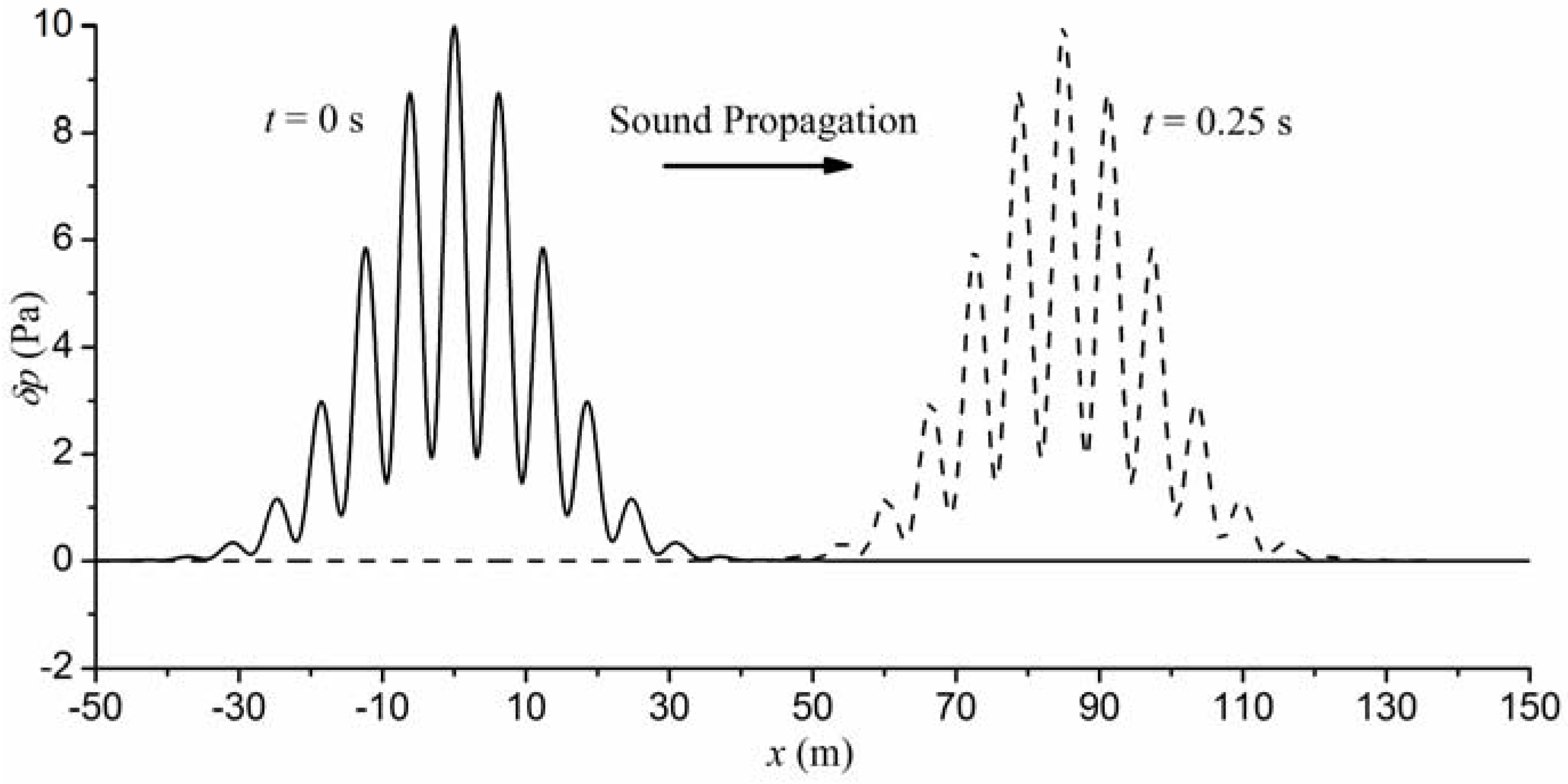 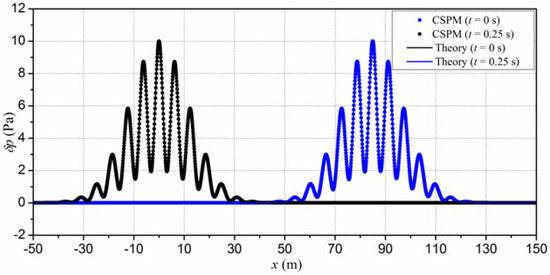 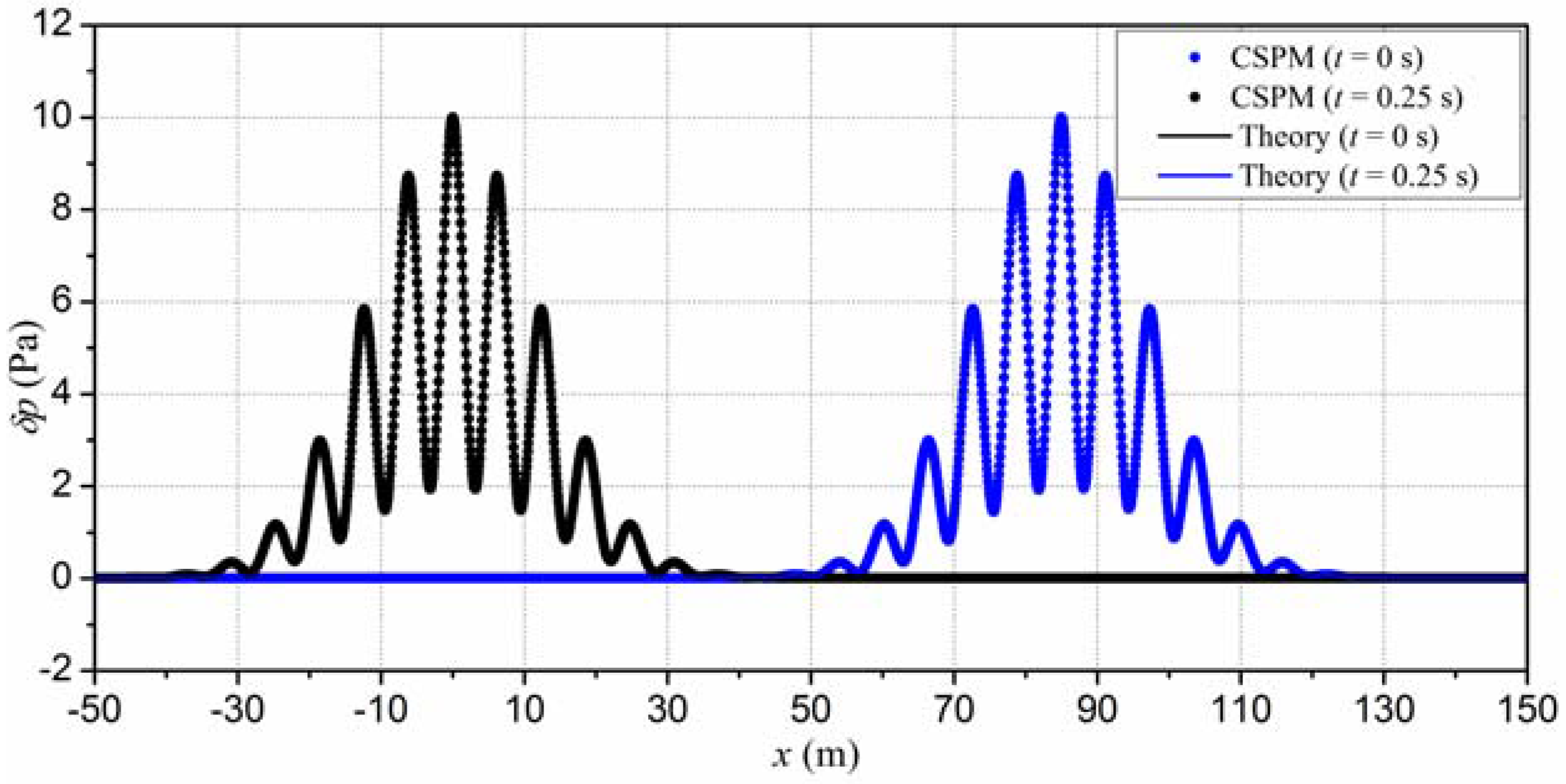 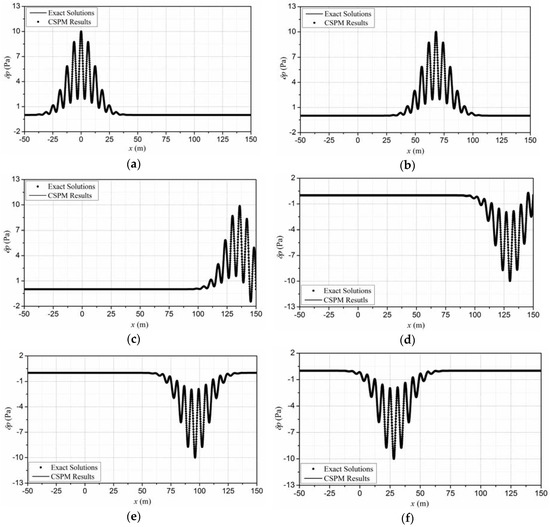