Channel confluences are of the common structures in fluid transport channels. In this study, a series of numerical simulations were performed, utilizing a 3D code to investigate the reaction of the flow parameters and vortical structure to the variations in flow discharge and its Froude number from both main channel and tributary branch in a T-shape junction. The code was calibrated with the experimental data. Parameters, including the velocity, the turbulence energy, stream surface profile, head losses, and the transverse flow motions, were considered in different situations. It was concluded that increasing the ratio of discharge of flow from side-channel to the main channel (Q*) increased the area and power of the recirculation zone, as well as the width of separation plate downstream of the confluence, while it reduced the area of the stagnation zone (or the wake vortex) within the side-channel. It was also indicated that increasing the discharge ratio from side-channel resulted in an increase in the upstream water level in the main channels, which was dependent on the upstream discharge. View Full-Text
Keywords: channel confluence; turbulent structure; the separation zone channel confluence; turbulent structure; the separation zone
►▼ Show Figures 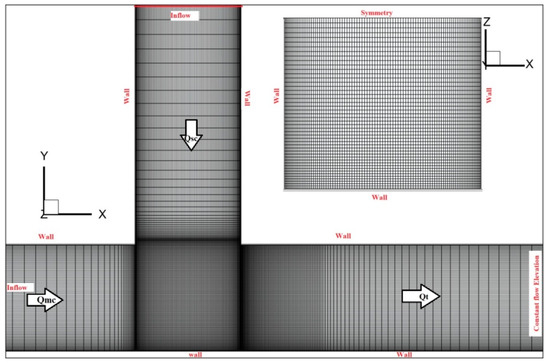 Azma, A.; Zhang, Y. The Effect of Variations of Flow from Tributary Channel on the Flow Behavior in a T-Shape Confluence. Processes 2020, 8, 614.


Azma A, Zhang Y. The Effect of Variations of Flow from Tributary Channel on the Flow Behavior in a T-Shape Confluence. Processes. 2020; 8(5):614.


Azma, Aliasghar; Zhang, Yongxiang. 2020. "The Effect of Variations of Flow from Tributary Channel on the Flow Behavior in a T-Shape Confluence." Processes 8, no. 5: 614.