Polymer flooding enhances oil recovery, but during the application of this technology, it also creates a large amount of polymer-contained produced water that poses a threat to the environment. The current processing is mainly focused on being able to meet the re-injection requirements. However, many processes face the challenges of purifying effect, facilities pollution, and economical justification in the field practice. In the present work, to fully understand the structure and principle of the oil field filter tank, and based on geometric similarity and similar flow, a set of self-designed filtration simulation devices is used to study the treatment of polymer-contained produced water in order to facilitate the satisfaction of the water injection requirements for medium- and low-permeability reservoirs. The results show that, due to the existence of polymers in oil field produced water, a stable colloidal system is formed on the surface of the filter medium, which reduces the adsorption of oil droplets and suspended solids by the filter medium. The existence of the polymers also increases the viscosity of water, promotes the emulsification of oil pollution, and increases the difficulty of filtration and separation. As filtration progresses, the adsorption of the polymers by the filter medium bed reaches saturation, and the polymers and oil pollution contents in the filtered water increase gradually. The concentration and particle size of the suspended solids eventually exceed the permissible standards for filtered water quality; this is mainly due to the unreasonable size of the particle in relation to the filter medium gradation and the competitive adsorption between the polymers and the suspended solids on the surface of the filter medium. The oil concentration of the filtered water also exceeds the allowable standards and results from the polymers replace the oil droplets in the pores and on the surfaces of the filter medium. Moreover, the suspended particles of the biomass, composed of dead bacteria, hyphae, and spores, have strong attachment and carrying ability with respect to oil droplets, which cause the suspended solids in the filtered water to exceed the permissible standards and oil droplets to be retained in the filtered effluent at the same time.
Keywords: polymer-flooding produced water; filtration; interception characteristics; filter medium pollution polymer-flooding produced water; filtration; interception characteristics; filter medium pollution

2.1. Design of the Filter Simulation Device

A water sample at the inlet of the filter tank of the oil field produced water station was used for the laboratory experiment. The raw water contained a polymer concentration of 514 mg/L, the oil content was 79.1 mg/L, and the suspended solids content was 53.7 mg/L. Among them, oil content and suspended solids content were analyzed by means of the spectrophotometry method and the gravimetric method, respectively [39,40], and polymer concentration was analyzed by means of the starch/cadmium iodide method [41]. The water sample was stored in the mixing tank to ensure the uniform dispersion of oil and water. The filtration period was 24 h, and the flow rate of the pump was adjusted to ensure that the Reynolds number of the laboratory device was similar to that of the field device.

3.1. Analysis of the Pollution Characteristics of the Filter Medium

As shown in Figure 3, after a filtration cycle, the appearance of the filter medium became black overall, and in particular, a great deal of black-brown oil pollution was intercepted on the surface of the filter layer.
The intercepted oil pollution was tested and analyzed by SY/T 5119-2016 “Analysis of soluble organic compounds and crude oil components in rocks”, GB/T 8929-2006 “Determination of water content in crude oil by distillation”, SY/T 0600-2016 “Oil field water scaling trend prediction”, and other related standards. The results are shown in Table 2.
From the analysis of the oil pollution composition, as shown in Table 2, it can be seen that waste oil was the main component of the oil pollution intercepted by the filter medium, accounting for 71%, whereas the solid phase content constituted only 2.35%. Components of colloid and asphaltene were present in the waste oil, accounting for nearly 30%. Thus, the carrying capacity of the polymer-flooding produced water with respect to waste oil was very strong and the difficulty of treating the produced water in this first stage settlement treatment was greatly increased.
Table 3 shows the solid phase composition in the oil pollution, combined with the microscopic morphology as shown in Figure 4, it can be seen that the intercepted oil pollution on the surface of the filter medium was a whole formed by the accumulation and cementitious formation of fine particles. The main elements in the solid phase inorganic composition were Si, O, C, Fe, Al, and Ca, containing 69.69% aluminosilicate (silica, alumina), 12.05% carbonate (calcium carbonate, magnesium carbonate, barium carbonate, etc.), and 9.09% iron oxide. The results show that the components intercepted by the filter layer were crude oil and silicon aluminate scale carried in the process of oil field production, as well as iron oxides formed by the corrosion of pipelines and equipment during transportation.

3.2. The Micromorphology of the Polymers in the Filtration Process

3.2.2. Morphology and Distribution of Residual Polymers Before and After Filtration

3.2.3. Microcosmic Characteristics of Intercepted Polymers in the Filter Layer

3.3. Analysis on the Causes of Substandard Filtered Water Quality

3.3.1. Analysis on the Causes of Substandard Suspended Solids in the Filtered Water

3.3.2. Analysis on the Causes of Substandard Oil Content in the Filtered Water 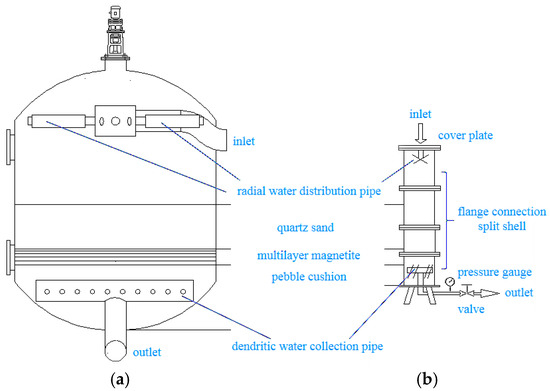 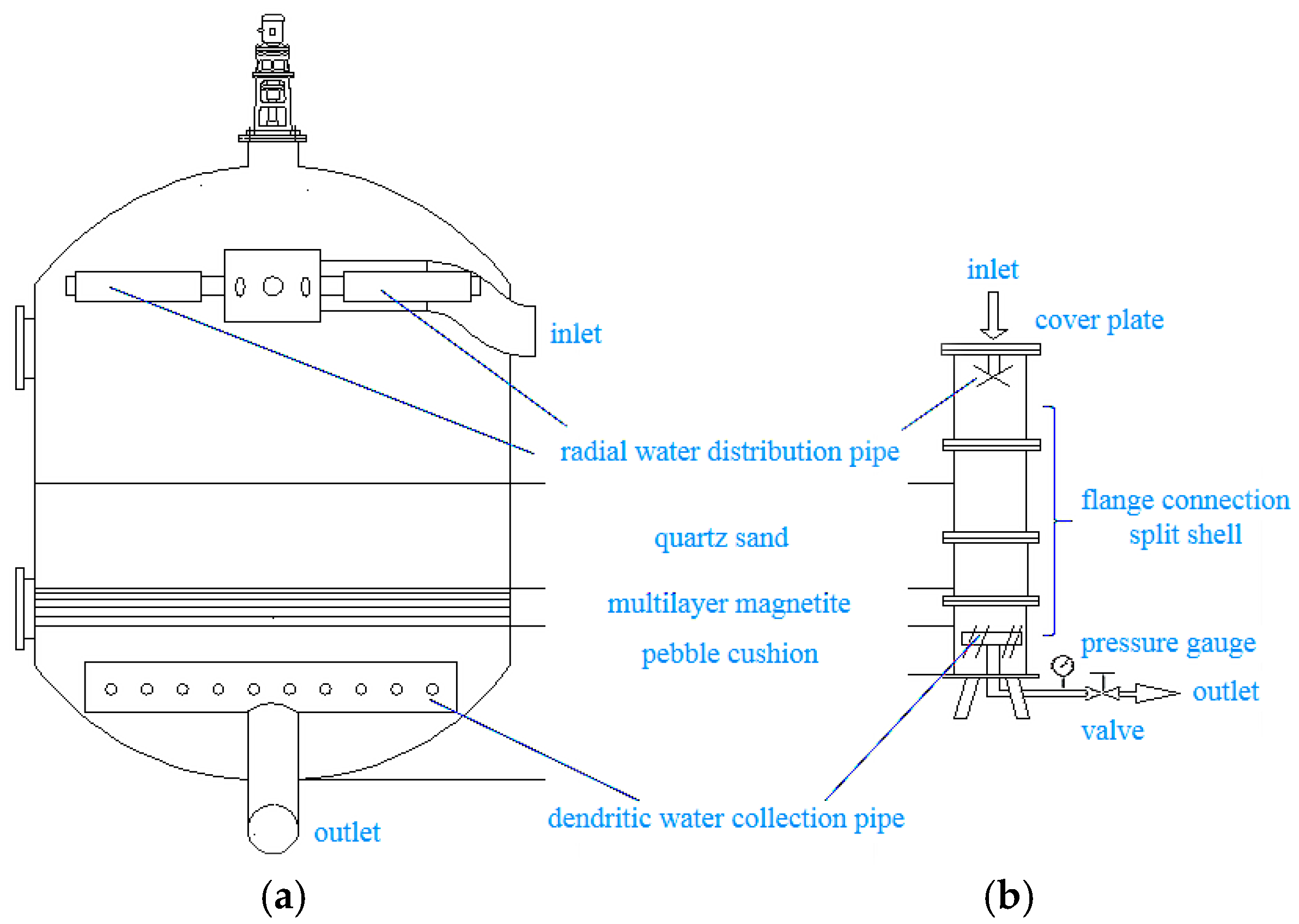 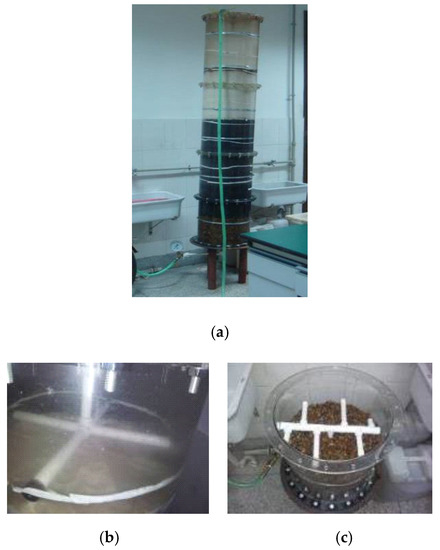 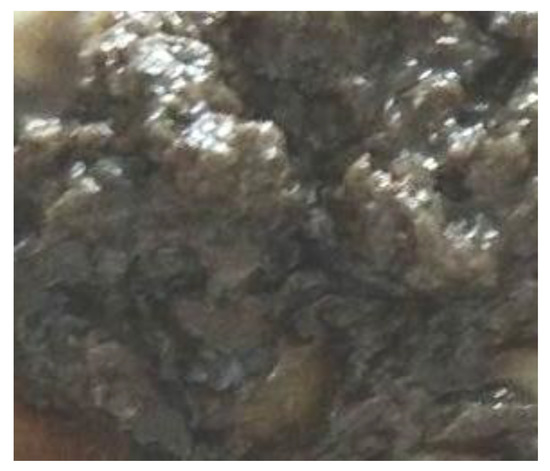 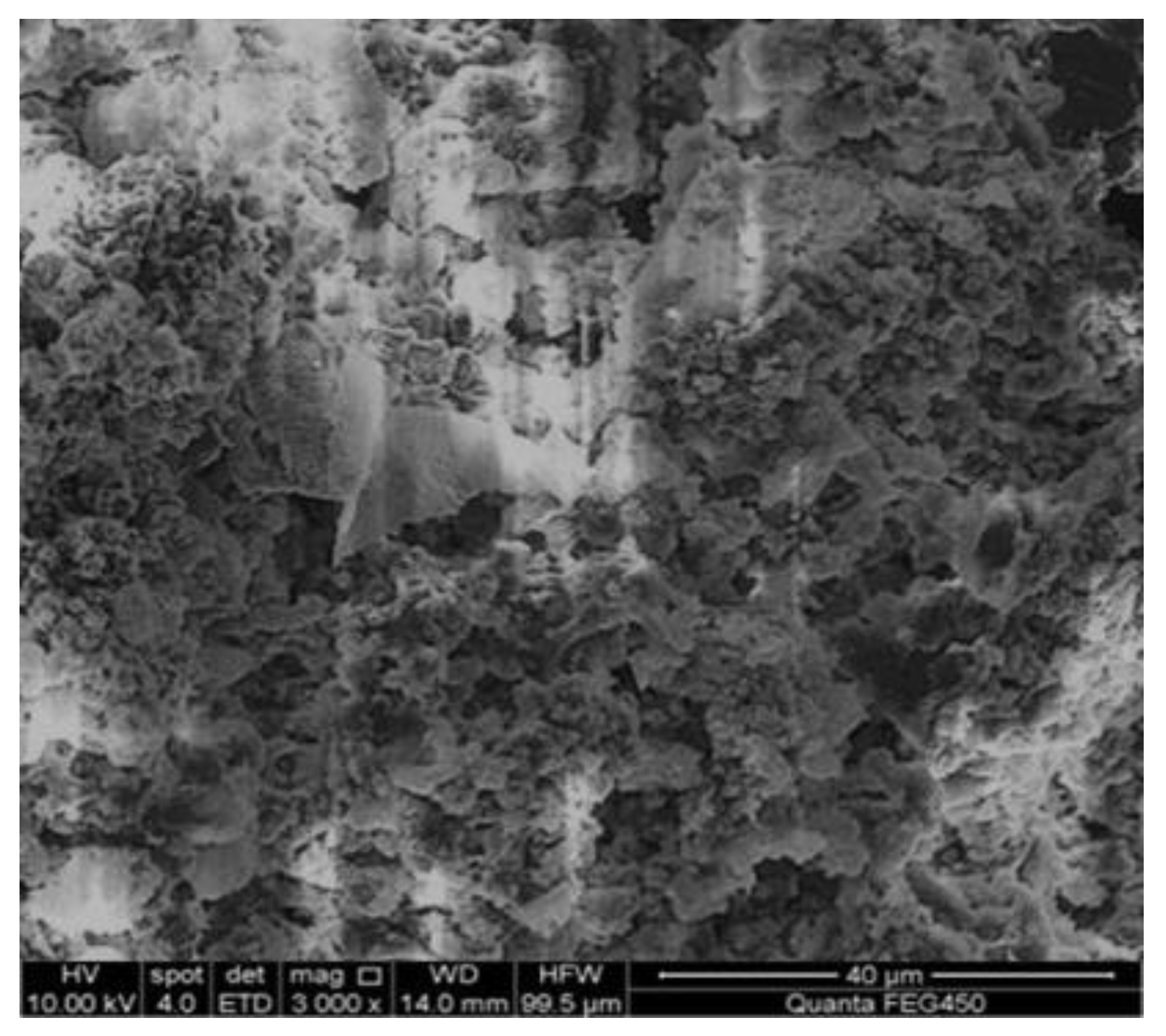 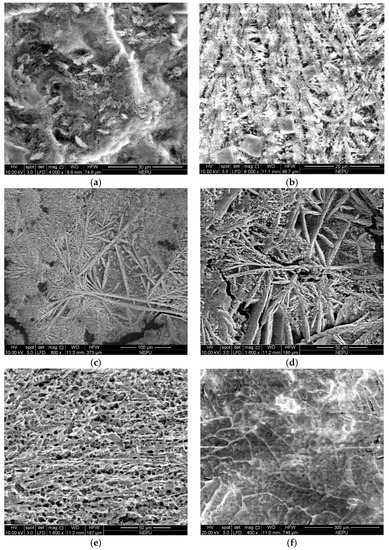 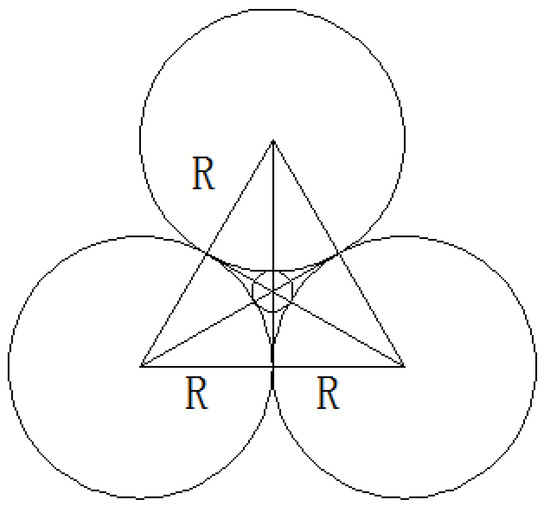 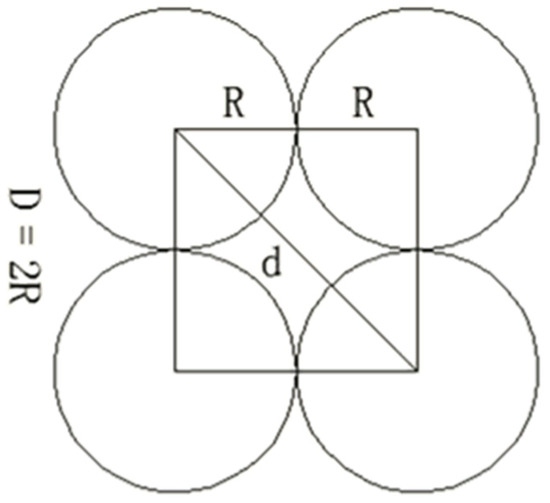 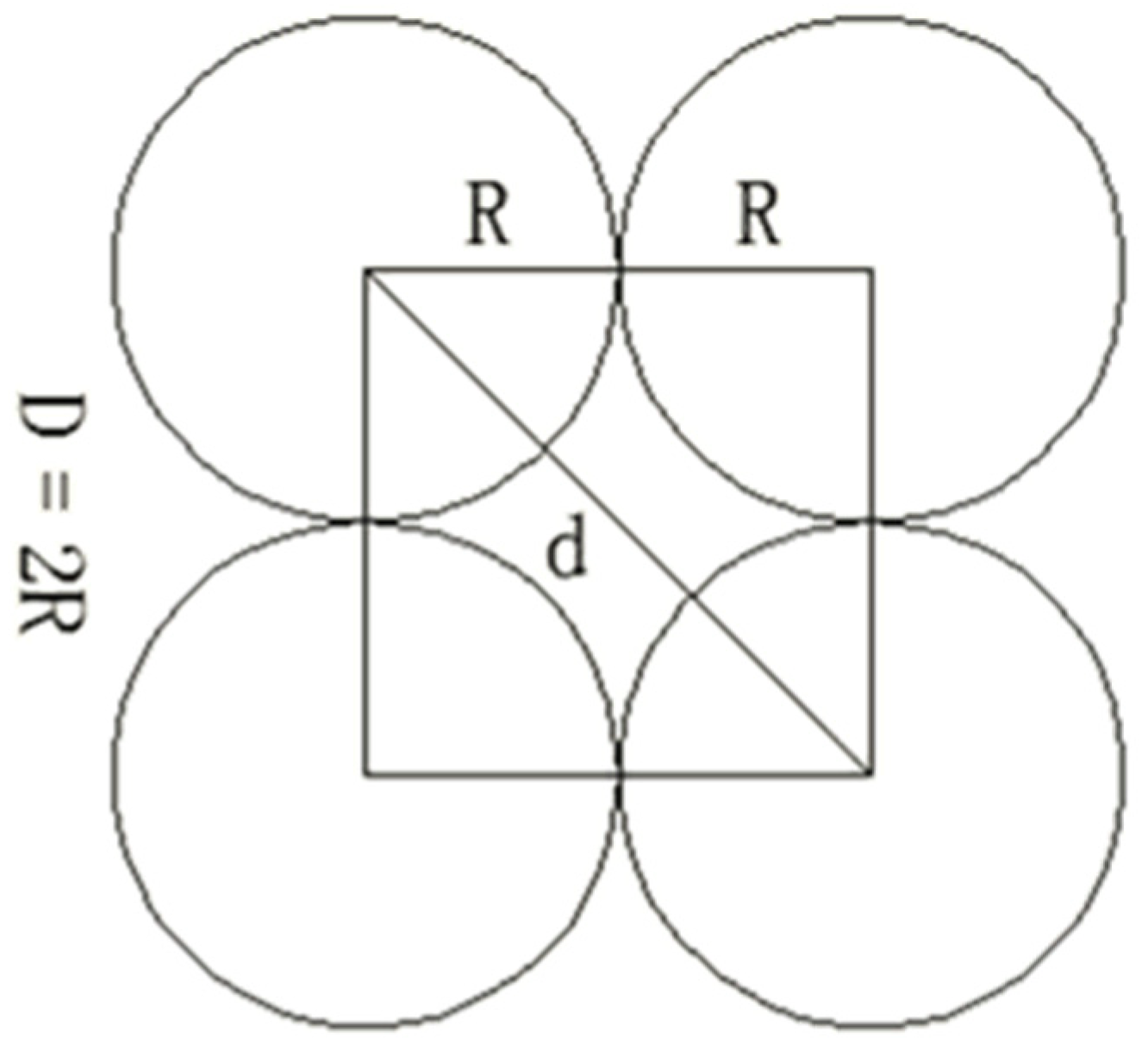 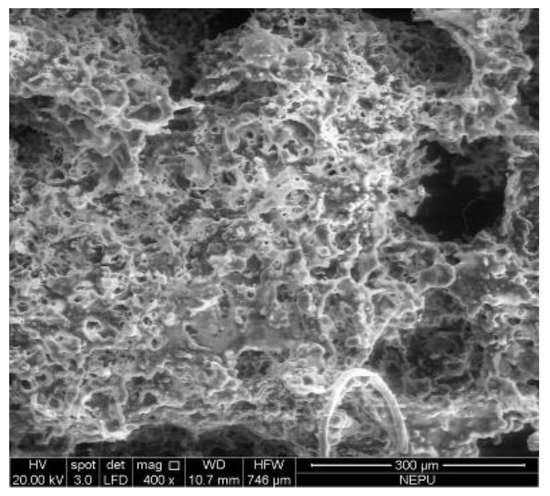 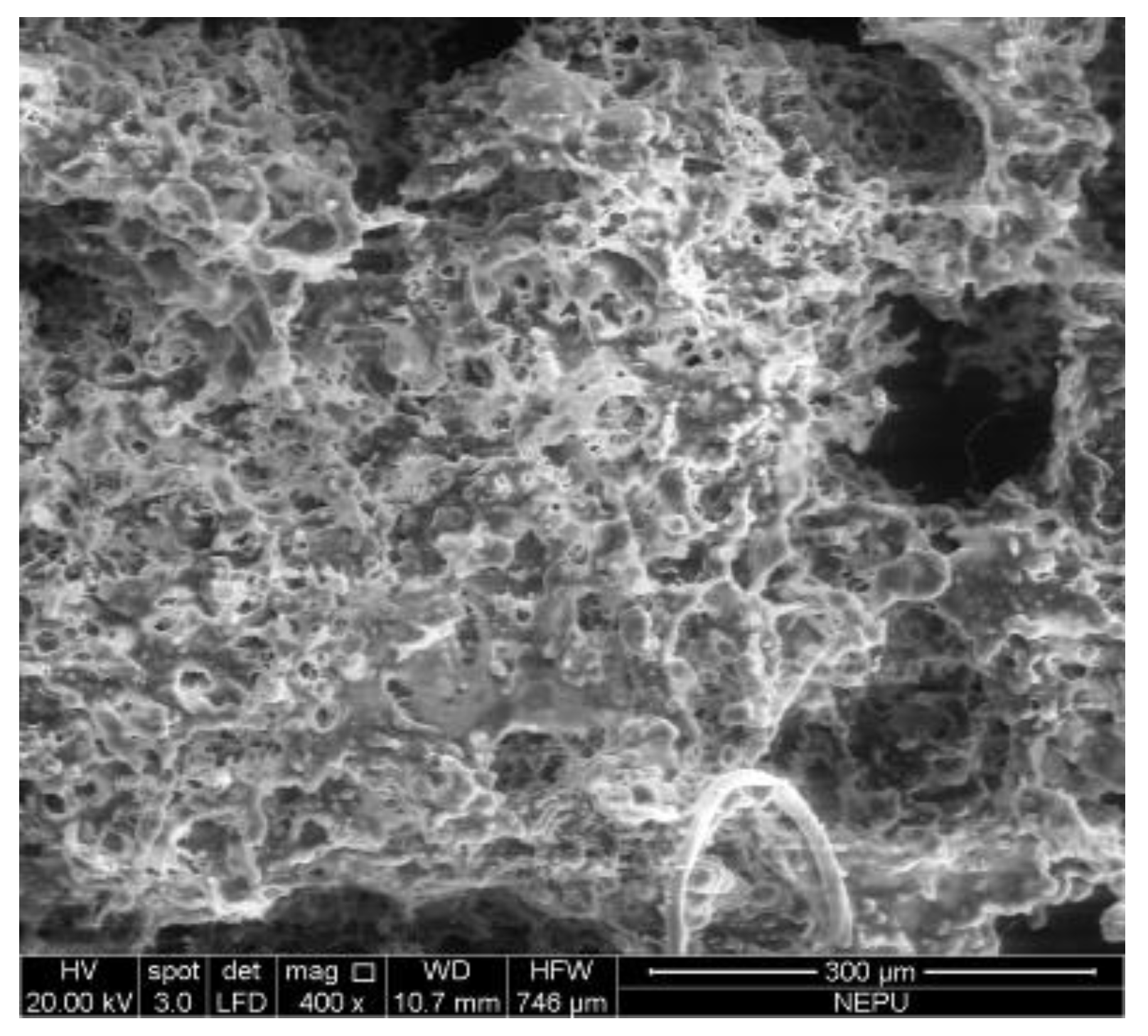