A DEA Approach for Assessing the Energy, Environmental and Economic Performance of Top 20 Industrial Countries
Previous Article in Special Issue

The Cu(II) adsorption from aqueous solutions by magnetic biochar obtained from pine needles has been studied by means of batch-type experiments. The biochar fibers have been magnetized prior (pncm: carbonized-magnetized pine needles) and after oxidation (pncom: carbonized-oxidized-magnetized pine needles) and have been used as adsorbents to study the presence of carboxylic moieties on the magnetization and following adsorption process. The effect of pH (2–10), initial metal concentration (10−5–9·10−3 mol·L−1) and contact time (0–60 min) has been studied by varying the respective parameter, and the adsorbents have been characterized by Fourier transform infrared (FTIR) and X-ray diffraction (XRD) measurements prior and after Cu(II)-adsorption. FTIR measurements were performed to investigate the formation of surface species and XRD measurements to record possible solid phase formation and characterize formed solids, including the evaluation of their average crystal size. The data obtained from the batch-type studies show that the oxidized magnetic biochar (pncom) presents significantly higher adsorption capacity (1.0 mmol g−1) compared to pncm (0.4 mmol g−1), which is ascribed to the synergistic effect of the carboxylic moieties present on the pncom surface, and the adsorption process follows the pseudo-second order kinetics. On the other hand, the FTIR spectra prove the formation of inner-sphere complexes and XRD diffractograms indicate Cu(II) solid phase formation at pH 6 and increased metal ion concentrations. View Full-Text
Keywords: copper adsorption; magnetized pine needle biochar; isotherms; kinetics; FTIR and XRD studies copper adsorption; magnetized pine needle biochar; isotherms; kinetics; FTIR and XRD studies
►▼ Show Figures 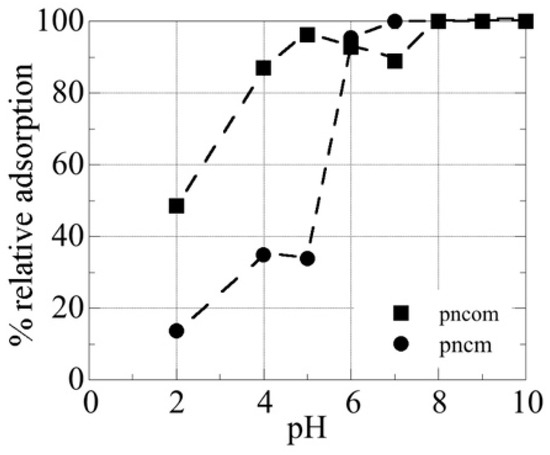