Means-tested pension policies are typical for many countries, and the assessment of policy changes is critical for policy makers. In this paper, we consider the Australian means-tested Age Pension. In 2015, two important changes were made to the popular Allocated Pension accounts: the income means-test is now based on deemed income rather than account withdrawals, and the income-test deduction no longer applies. We examine the implications of the new changes in regard to optimal decisions for consumption, investment and housing. We account for regulatory minimum withdrawal rules that are imposed by regulations on Allocated Pension accounts, as well as the 2017 asset-test rebalancing. The policy changes are considered under a utility-maximising life cycle model solved as an optimal stochastic control problem. We find that the new rules decrease the advantages of planning the consumption in relation to the means-test, while risky asset allocation becomes more sensitive to the asset-test. The difference in optimal drawdown between the old and new policy is only noticeable early in retirement until regulatory minimum withdrawal rates are enforced. However, the amount of extra Age Pension received by many households is now significantly higher due to the new deeming income rules, which benefit wealthier households who previously would not have received Age Pension due to the income-test and minimum withdrawals. View Full-Text
Keywords: dynamic programming; stochastic control; optimal policy; retirement; means-tested age pension; defined contribution pension dynamic programming; stochastic control; optimal policy; retirement; means-tested age pension; defined contribution pension
►▼ Show Figures 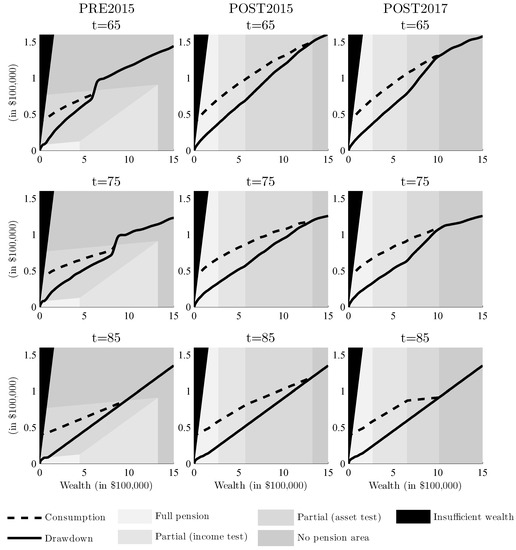