clear
Please note that, as of 1 January 2016, Chromatography has been renamed to Separations and is now published here.
Open AccessArticle

In this study, the separation parameters in micellar electrokinetic chromatography (MEKC)-laser-induced fluorescence (LIF) were optimized for the separation of red and yellow historical dyes in 20 mM borate buffer with 20 mM sodium dodecyl sulfate (SDS). Separation conditions were optimized by changing pH, organic modifier (methanol and acetonitrile) concentrations and applied voltage. The mixtures of dyes used in this study included four anthraquinone dyes (alizarin, purpurin, emodin and carmine) and six flavonoid dyes (luteolin, apigenin, kaempferol, quercetin, morin and myricetin). For this work, dyes were introduced electro-kinetically (10 kV for 5 s) into a 50 cm capillary (10 µm id) and separated using a running potential of 18, 20, 22 and 25 kV. Absolute limits of detection for most of these dyes was less than 1 pg. For dyes such as alizarin, improved detection limits were achieved at pH = 9.24; however dyes such as purpurin had significantly improved detection limits at pH = 8.0. The successful extraction and identification of a number of dyes in plants and textiles samples is also described. View Full-Text
Keywords: micellar electrokinetic chromatography (MEKC); laser-induced fluorescence (LIF); anthraquinone; flavonoid; historical dyes micellar electrokinetic chromatography (MEKC); laser-induced fluorescence (LIF); anthraquinone; flavonoid; historical dyes
►▼ Show Figures 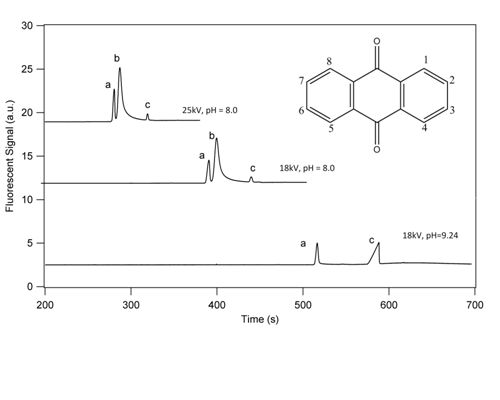