Muscle Ultrasonographic Elastography in Children: Review of the Current Knowledge and Application
Previous Article in Journal

Spinal muscular atrophy (SMA) is an autosomal recessive disorder that affects the motor neurons in the anterior horn of the spinal cord, resulting in muscle atrophy and loss of muscle strength [1]. SMA is caused by insufficient production of SMN protein due to deletion or mutation of the survival motor neuron 1 (SMN 1) gene [2,3].
Recently, nusinersen targeting the SMN gene has been used as a treatment for SMA. Previous research has consistently demonstrated that nusinersen treatment improves both gross motor function as measured using the Hammersmith Functional Motor Scale (expanded version) (HFMSE) and upper extremity motor function as measured using the Revised Upper Limb Module (RULM) in patients with later-onset SMA [4].
Although the RULM also includes some items related to hand dexterity, such as picking up coins and tearing a piece of paper, it is difficult to assess quantitative changes in dexterity because the tool utilizes a three-point scale (0, 1, 2). Previous studies only addressed changes in the total RULM score following administration of nusinersen, without performing subgroup analysis for specific items [4,5]. Therefore, while such studies were able to confirm improvements in general upper limb motor function following nusinersen administration, they were unable to confirm whether patients exhibited improvements in fine manual dexterity. The present study is the first to investigate and demonstrate the effect of nusinersen on fine manual dexterity in patients with SMA type 2.

A total of five patients with 5q SMA, confirmed based on SMN1 genetic documentation, were included in this study. All patients had a clinical classification of SMA type 2 and received neither permanent ventilator support nor enteral feeding. Between May 2019 and December 2019, the patients were referred to the Department of Rehabilitation Medicine to evaluate functional changes before and after nusinersen administration.
Nusinersen was administered intrathecally at a dose of 12 mg on days 0 (1st), 14 (2nd), 28 (3rd), and 63 (4th) according to the protocol, following which, it was administered once every 4 months for maintenance. Functional evaluations were performed before starting nusinersen treatment, between the 3rd and 4th doses, and before administration during the maintenance period. Patients underwent follow-up for a total of 18 months.
This study was approved by the Institutional Review Board of Chungbuk National University (CBNUH 2021-08-011), who waived the requirement for informed consent due to the retrospective nature of the study.

The 33-item HFMSE was developed to evaluate gross motor function related to daily living in patients with SMA type 2 or 3. Each item is scored from 0 (no response) to 2 (full response), with total scores ranging from 0 to 66 [6,7].
The Purdue Pegboard (PP) test is a standardized assessment of fine manual dexterity that is mainly used to evaluate functional abnormalities in patients with neurological impairment or developmental delay. There are normative data for most age groups, as well as reference data for preschool children over the age of 2 years, 6 months [8].
The PP test was used to evaluate fine manual dexterity in each hand. The PP test assesses the patient’s ability to pick up pegs one at a time from a cup on top of the pegboard and insert them into the holes as quickly as possible. The test was first performed using the preferred hand followed by the non-preferred hand, and the number of pegs inserted within 30 s was measured [8].
The assessments were performed by one trained clinical evaluator, and training was conducted to establish reliability before data collection began.

Baseline HFMSE scores before nusinersen administration ranged from 10 to 40 points. At 18 months after nusinersen administration, HFMSE scores had improved in all patients, ranging from a minimum of +3 points to a maximum of +10 points (+13–53%). Although there were variations among patients, gross motor functions related to trunk control such as lying, rolling, sitting, crawling, and kneeling [9] tended to improve (Table 2 and Figure 1).

Changes in PP scores from baseline to 18 months confirmed that nusinersen treatment improved fine manual dexterity in patients with SMA type 2. Simply adding the PP test to the existing battery of evaluation tools may help to provide a more thorough assessment of the fine manual dexterity essential for daily living activities in patients with SMA type 2.

This study was approved by the Institutional Review Board of the Chungbuk National University (IRB number: CBNUH 2021-08-011, date of approval: 18 August 2021).

Patient consent was waived due to the type of study (retrospective, based on existing data). 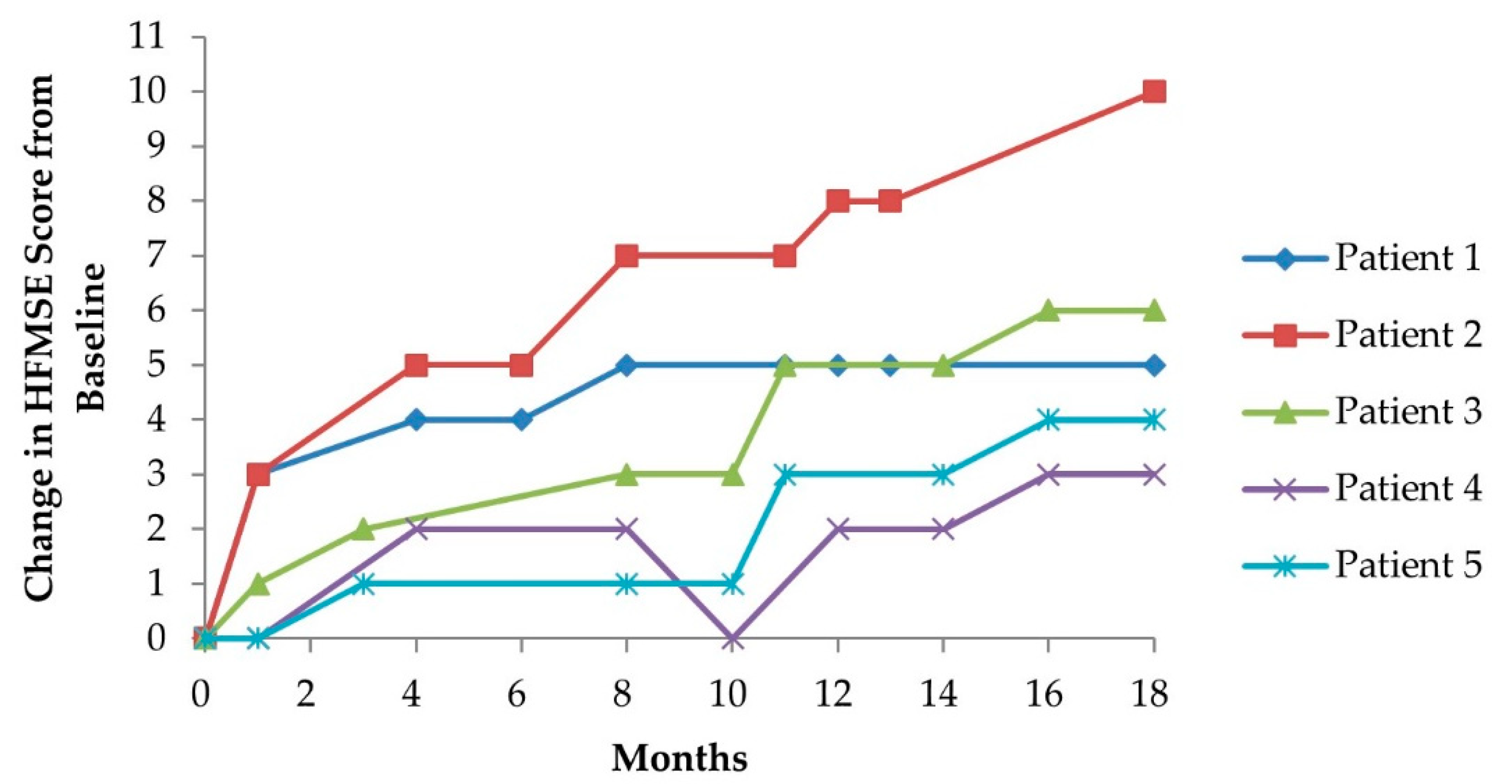 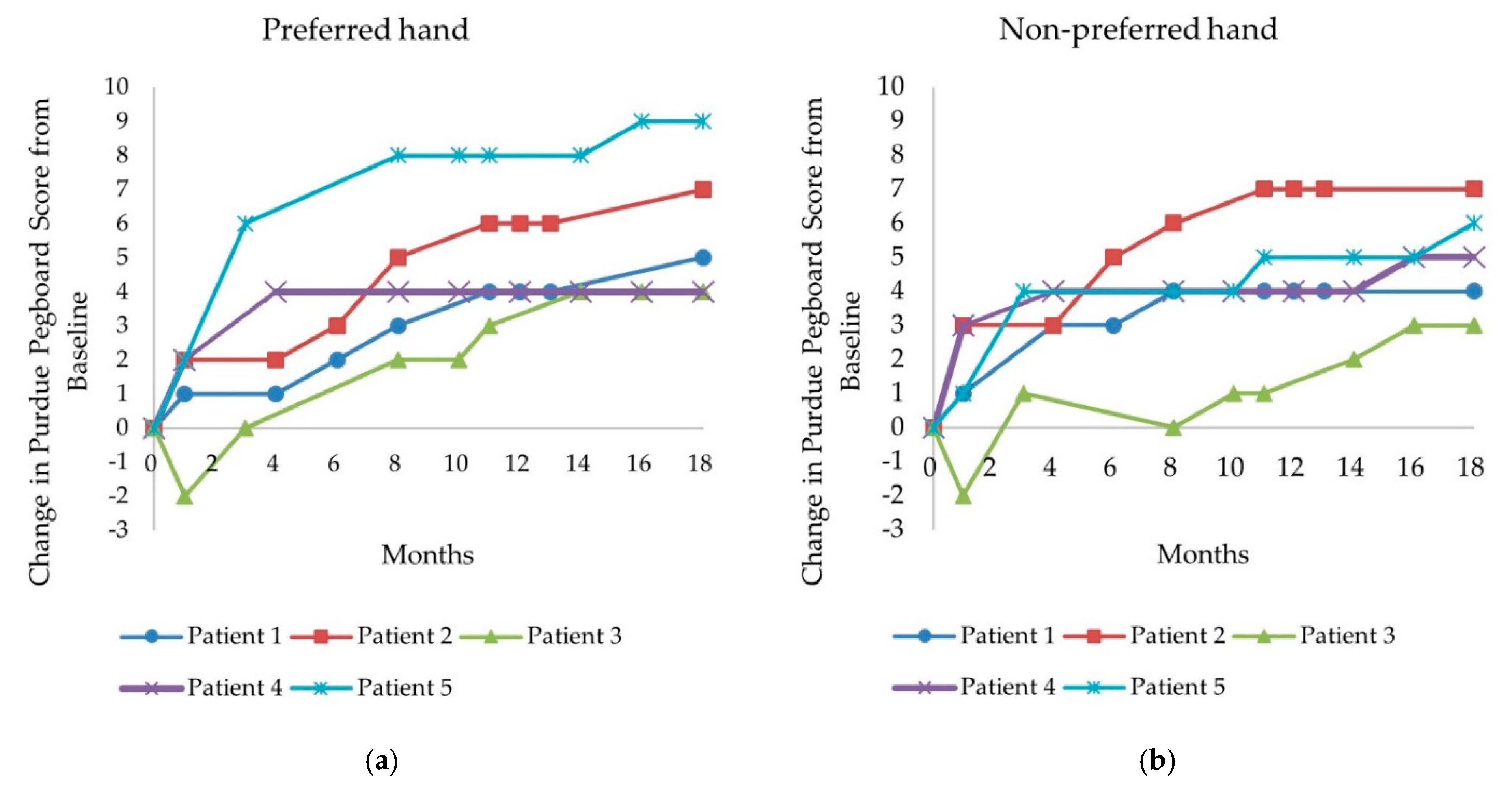 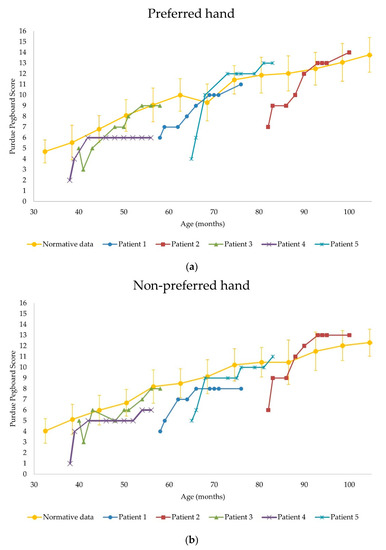 Table 3. Change in Purdue Pegboard scores from baseline.
Table 3. Change in Purdue Pegboard scores from baseline.
HFMSE—Hammersmith Functional Motor Scale (expanded version); PP—Purdue Pegboard; ∆—amount of change.
© 2021 by the authors. Licensee MDPI, Basel, Switzerland. This article is an open access article distributed under the terms and conditions of the Creative Commons Attribution (CC BY) license (https://creativecommons.org/licenses/by/4.0/).
We use cookies on our website to ensure you get the best experience. Read more about our cookies here.
Accept
We have just recently launched a new version of our website. Help us to further improve by taking part in this short 5 minute survey here. here.
Never show this again