Parenting and Health: The Major Challenge of Complex Relations

:
The DRSA method (dominance-based rough set approach) was used to create decision-making rules based on the results of physical examination and additional laboratory tests in the differential diagnosis of Kawasaki disease (KD), infectious mononucleosis and S. pyogenes pharyngitis in children. The study was conducted retrospectively. The search was based on the ICD-10 (International Classification of Diseases) codes of final diagnosis. Demographic and laboratory data from one Polish hospital (Poznan) were collected. Traditional statistical methods and the DRSA method were applied in data analysis. The algorithm formed 45 decision rules recognizing KD. The rules with the highest sensitivity (number of false negatives equals zero) were based on the presence of conjunctivitis and CRP (C-reactive Protein) ≥ 40.1 mg/L, thrombocytosis and ESR (Erythrocyte Sedimentation Rate) ≥ 77 mm/h; fair general condition and fever ≥ 5 days and rash; fair general condition and fever ≥ 5 days and conjunctivitis; fever ≥ 5 days and rash and CRP ≥ 7.05 mg/L. The DRSA analysis may be helpful in diagnosing KD at an early stage of the disease. It can be used even with a small amount of clinical or laboratory data.
Keywords:
Kawasaki disease; infectious mononucleosis; Streptococcus pyogenes; children; DRSA; differential diagnosis

Despite the development of medicine, in some cases, there are still no tests giving a clear diagnosis. One of such examples is the differential diagnosis of Kawasaki disease (KD), infectious mononucleosis and Streptococcus pyogenes infections (angina, scarlet fever). Dealing with each of those diseases is completely different. Proper diagnosis and accurate treatment implementation, especially in KD and streptococcal pharyngitis, can reduce the risk of permanent complications [1].
Symptoms presented by the patient such as pharyngitis with cervical lymphadenopathy and ambiguous skin lesions are almost the same in each of those cases and do not differentiate the mentioned diseases. Additional tests might be helpful, but none of them are 100% sensitive. In Table 1, there are presented symptoms and laboratory findings at the initial stage of three analyzed diseases.
That is why we decided to use artificial intelligence to try to deal with this problem. In this study, for the first time, the original methodology of the dominance-based rough set approach (DRSA) was used to create decision-making rules based on the results of physical examination as well as additional tests that can potentially be helpful in the differential diagnosis of KD, infectious mononucleosis and S. pyogenes pharyngitis in children. DRSA enables testing, even in the case of incomplete data, enables the comparison of parametric and non-parametric data. The disadvantage of the classical scaling system is that the conversion of clinical data into numeric values risks losing the primary character of the data. Different parameters are added together as if they were equal, such that the sum of completely different parameters can yield the same results. The obtained results are non-informative in that they do not show how the diagnosis was made. It discourages the application of this system in therapeutic decisions because it does not give decision makers the chance to evaluate the independent results.

The study was conducted retrospectively. The search was based on the ICD-10 (International Classification of Diseases) codes of final diagnosis.
Data was collected from 1 January 2015 to 31 December 2019 in the Children’s Hospital in Poznan, which includes four pediatric departments. Children of both sexes up to five years of age in the case of infectious mononucleosis and S. pyogenes infection were included in the study. When considering KD, all children with this particular diagnosis were included in order to extend the study group as much as possible. The definite diagnosis of KD was based on AHA (American Heart Association) criteria. We used this age restriction because we wanted to eliminate adolescent patients with infectious mononucleosis. Epidemiological data show that this disease is most common in older children and young adults, in whom KD is very unlikely [2]. The second aspect is the prevalence of KD, primarily in children under five years of age. In the absence of an age restriction (excluding KD), comparing such inhomogeneous in age groups would not fit into the overall study aim.
Streptococcal pharyngitis was diagnosed based on positive rapid antigen tests for S. pyogenes. According to Polish recommendations, when there is a positive high-sensitivity test, it is not necessary to perform a throat culture [3]. The test was performed at the admission to the hospital, so at the beginning of diagnostic process, as well as before treatment started. The diagnosis of infectious mononucleosis was made based on positive serological results—positive IgM and IgG anti-VCA (anti-viral capsid antigen) antibodies. We collected following data: basic demographic information, the duration of the fever and physical examination results. General status was defined as good, fair, serious or critical. When it comes to examination, we chose those clinical signs which are known as diagnostic criteria for KD: general condition, presence of conjunctivitis, oral mucosa findings, distal extremities changes, skin changes and presence of cervical lymph nodes enlargement.
The laboratory test included those which are easily available: general blood count, alanine aminotransferase (ALT) activity, aspartate aminotransferase (AST) activity, urinalysis, urine culture, erythrocyte sedimentation rate (ESR), C-reactive protein (CRP) and procalcitonin levels. The values of the blood count parameters and the activity of ALT and AST were analyzed depending on the normal values specified for a given age group [4,5,6]. Blood for laboratory tests was collected during children’s admission.

There were two subclasses among the data. The first included patients who were diagnosed with Kawasaki Disease. The second one contained the remaining patients, i.e., those who were finally diagnosed with infectious mononucleosis or Streptococcal infection. A relatively high number of missing values was observed for ESR and procalcitonin attributes. Overall, the resulting data set was fully consistent.
DRSA analysis was performed using jRS library and jMAF software package (http://www.cs.put.poznan.pl/jblaszczynski/Site/jRS.html (accessed on 16 October 2021).
Some attributes were transformed in a way that allowed the discover global and local monotonic relationships between condition and decision attributes [7]. The applied transformation was non-invasive, that is, it did not bias the matter of discovered relationships. Sets of decision rules, which were essential for this analysis, were induced using VC-DOMLEM algorithm [8]. These sets of rules were used to construct component classifiers in variable consistency bagging [9,10]. Variable consistency bagging (VC-bagging) and its variants developed to handle class imbalance were applied to increase the accuracy of results produced by VC-DOMLEM [11]. Estimation of attribute relevance in rules was performed according to Blaszczynski et al. [12]. All results were obtained in a 10-fold cross validation experiment that was repeated 20 times.
Most relevant rules with respect to correct classification of cases by decision rules in repeated cross validation are presented in Table 2. Correct classification to any of the two considered classes were investigated in this setting.

Statistical analysis was performed using PQStat 1.8.0. (PQStatSoftware). For one group of data, Wilcoxon signed-rank test and χ2 test were used. Comparison of two groups were performed using the χ2 test, Student’s t-test or a correction for this test (Cochran–Cox). Shapiro–Wilk test was used to check normal distribution of data and Fisher–Snedecor test determined the equality of variance of variables in the analyzed population. While comparing three groups of data the Shapiro–Wilk test was used as well. Levene’s test was used to check whether the variances of the variables in the population are equal for the interval scale. When comparing groups in the interval scale, the ANOVA test was used for unrelated variables (mean age of patients, mean length of hospitalization). The χ2 test was used to compare the groups on the nominal scale. Post-hoc analysis, if needed, was performed with the Fisher test. For the SR value (Sedimentation Rate, Biernacki’s test), it was impossible to perform statistical analysis because of too few patients with this result. Statistical significance was calculated for PCT (procalcitonin) and CRP (C-reactive protein) values. The significance level was set at p < 0.05.

The most important predictors for the decision rules are presented in Figure 1.
Lymphadenopathy (1)—one side enlargement of cervical lymph nodes; Lymphadenopathy (2)—symmetrical (both sides) enlargement of cervical lymph nodes
The algorithm generated 45 decision rules recognizing KD. The rules with the highest sensitivity (number of false negatives equals zero) are as follows:

It is explained in the informed consent statement section. The data concerned hospitalized patients, no additional tests were taken beyond those required by the hospitalization itself. Parents signed this consent upon admission.

On admission to the hospital, all patients’ guardians were informed that their children’s medical data obtained during hospitalization may be anonymously used for various analyses. That kind of consent is enough for this kind of research from the ethical point of view in Poland. 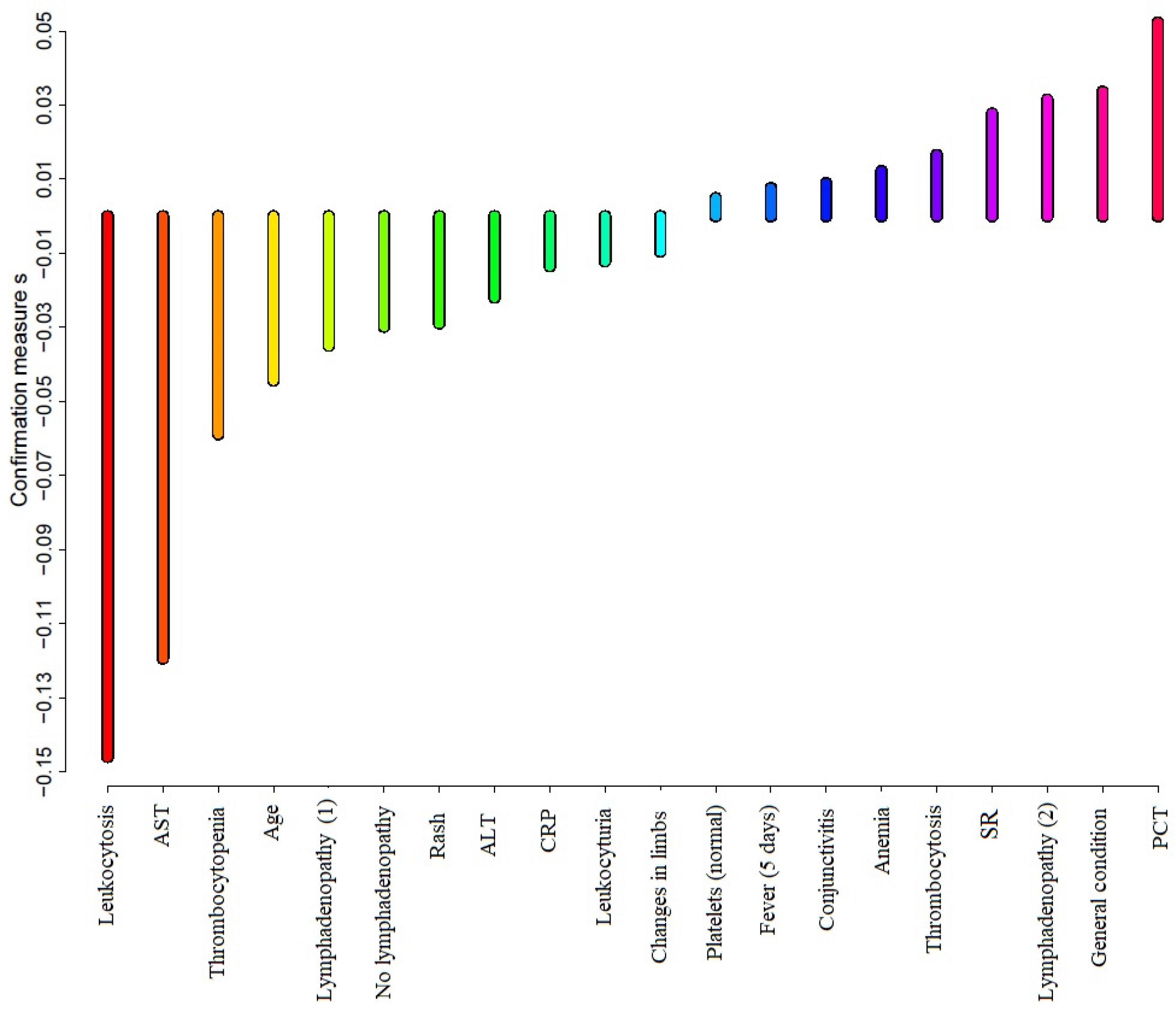