Cerebral Palsy and Epilepsy in Children: Clinical Perspectives on a Common Comorbidity

Cerebral palsy (CP) is a frequent cause of childhood disability often associated with a complex group of disorders, including epilepsy, which is reported to impact approximately 40% of affected individuals. This retrospective study involved a group of children affected by CP, some of whom also had comorbid epilepsy. The aim of this study was to report our experience of analyzing, in particular, (a) some of the clinical aspects of the different type of CP, and (b) the relationship between the clinical data of children affected by CP plus epilepsy and each type of CP. Methods: This retrospective single-center study was performed with 93 children admitted to the Pediatric Department of the University of Catania, Italy, affected by CP and distinguished according to the type of motor clinical presentation, with 46 showing epileptic seizures, compared to a control group of 136 children affected by epilepsy without other neurologic disorders. Results: Among the 93 CP children, 25 (27%) had spastic quadriplegia (plus one patient with dystonic quadriplegia), 39 (42%) had spastic hemiplegia, 11 (12%) had spastic diplegia (plus two with ataxia and one with dyskinetic CP), and 14 (15%) did not have a well-defined type of CP. The frequency of epilepsy was higher in affected CP children who showed major motor dysfunction (GMFCS IV–V types). As regards the 46 children with CP plus epilepsy, compared to the group of the control, the age of epilepsy onset was found to be statistically significant: 21 ± 35.1 months vs. 67 ± 39.7. Conclusions: Epilepsy represents one of the most frequent comorbidities of cerebral palsy. In children with CP, particular attention should be paid to the early identification and treatment of comorbid epilepsy. View Full-Text
Keywords: cerebral palsy; quadriplegia; hemiplegia; epilepsy; seizures cerebral palsy; quadriplegia; hemiplegia; epilepsy; seizures
►▼ Show Figures 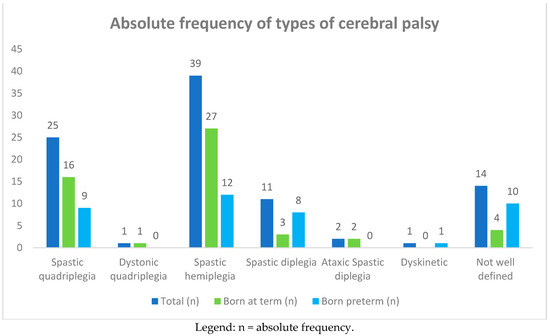