The Role of Skin Barrier in the Pathogenesis of Food Allergy

Kiwifruit Allergy in Children: Characterization of Main Allergens and Patterns of Recognition

Kiwifruit allergy has been described mostly in the adult population, but immunoglobulin (Ig)E-mediated allergic reactions to kiwifruit appear to be occurring more frequently in children. To date, 13 allergens from kiwifruit have been identified. Our aim was to identify kiwifruit allergens in a kiwifruit allergic-pediatric population, describing clinical manifestations and patterns of recognition. Twenty-four children were included. Diagnosis of kiwifruit allergy was based on compatible clinical manifestations and demonstration of specific IgE by skin prick test (SPT) and/or serum-specific IgE determination. SDS-PAGE and immunoblotting were performed with kiwifruit extract, and proteins of interest were further analyzed by mass spectrometry/mass spectrometry. For component-resolved in vitro diagnosis, sera of kiwifruit-allergic patients were analyzed by an allergen microarray assay. Act d 1 and Act d 2 were bound by IgE from 15 of 24 children. Two children with systemic manifestations recognized a protein of 15 kDa, homologous to Act d 5. Act d 1 was the allergen with the highest frequency of recognition on microarray chip, followed by Act d 2 and Act d 8. Kiwifruit allergic children develop systemic reactions most frequently following ingestion compared to adults. Act d 1 and Act d 2 are major allergens in the pediatric age group.
Keywords: actinidin; SDS-PAGE immunoblotting; pediatric; kiwifruit; food allergy actinidin; SDS-PAGE immunoblotting; pediatric; kiwifruit; food allergy

Kiwifruit (Actinidia) is a plant native to the Yangtze Valley that at the beginning of the nineteenth century grew wild in China [1]. Seeds of the green-fleshed kiwifruit, Actinidia deliciosa, were introduced into New Zealand in 1904 and exports to Europe and the USA started in 1962.
Allergic reactions to kiwifruit were first described in 1981 [2]. Since then, there have been an increasing number of publications on kiwifruit allergy. In Spain, the prevalence of kiwifruit sensitization has been estimated at 1.8% of the general population [3].
From the few studies describing kiwifruit allergy in pediatric populations, it appears that children are more likely to react on the first known exposure and more frequently develop systemic manifestations than adults [4]. Additionally, although kiwifruit allergy is most frequently associated with grass and birch pollen allergies [5], children are frequently mono-sensitized to kiwifruit, suggesting a role of primary digestive tract sensitization and a different pattern of IgE recognition of kiwifruit proteins than in adults.
To date, thirteen allergens have been identified in kiwifruit. Act d 1, called actinidin, represents about 50% of the total soluble protein content [6] and is considered a major allergen. The relevance of Act d 2, a thaumatin-like protein and Act d 3, a 45 kDa glycoallergen, [7,8,9] has yet to be elucidated. Act d 4 acts as an inhibitor of cysteine proteinases [10], with unclear clinical relevance. Act d 5, Kiwellin, is a cystein-rich protein that may undergo in vivo and in vitro proteolytic processing by kiwifruit actinidin, thus splitting in two additional proteins, KiTH and kissper [11]. Act d 6, a pectin methylesterase inhibitor that may be involved in the regulation of the fruit ripening, and Act d 7, a pectin methylesterase, seem to be recognized by a minority of allergic patients [12]; Act d 8, corresponds to a pathogenesis-related protein class 10 (PR-10) homologous to the major allergen of birch pollen Bet v 1 [13]. Other minor allergens from kiwifruit are Act d 9, a 14 kDa profilin, Act d 10, a nonspecific lipid transfer protein (LTP) [10] and Act d 11 a major latex protein/ripening-related protein that cross reacts with members from the PR-10 family [14]. Recently, two novel allergens contained in kiwifruit seeds have been described and characterized: Act d 12, a 51 kDa 11S globulin that represents a major allergen and Act d 13, a 12 kDa 2S albumin, which is a minor allergen. Both proteins share common epitopes from peanut and tree nuts, suggesting that both allergens might be involved in cross-reactivity with those allergenic sources [15].
Allergen component-resolved diagnostics (CRD) is an emerging in vitro tool for the diagnosis of food allergies. This method utilizes purified or recombinant allergens for identification of specific molecules causing sensitization or clinical allergy. CRD is becoming more interesting in this field, since it offers information regarding the probability of local oral vs. systemic allergic reactions following food ingestion, based on the specific molecule recognition patterns [16].
Our aim was to describe clinical and epidemiological characteristics of children allergic to kiwifruit as well as to identify major allergens from kiwifruit in this age group.

Children with kiwifruit allergy were recruited from the Pediatric Allergy Unit, at the University Hospital of La Coruña (Spain). Diagnosis of kiwifruit allergy was based on a convincing history of an objective allergic reaction after green kiwifruit ingestion in at least two occasions and demonstration of specific IgE to kiwifruit by skin prick test (SPT) and/or serum specific IgE. In patients with questionable symptoms (mild or subjective reactions) or when several foods were implicated, a single-blind food-challenge with kiwifruit was performed.

The study was approved by the local Ethics Committee (approval number: 2010/423). All subjects provided written informed consent before enrollment into the study.

SPT were performed with commercial extract (Leti Laboratories, Madrid, Spain) and with fresh kiwifruit pulp. The reaction was regarded as positive if the mean wheal diameter was at least 3 mm greater than the negative control (saline solution 0.9%).

Specific IgE to green kiwifruit was determined by the CAP system FEIA (Thermofisher Scientific, Barcelona, Spain), and was considered positive when greater than 0.35 kUA/L.

Green kiwifruit (Actinidia deliciosa cv. Hayward) was peeled, cut into pieces, and frozen at −80 °C within 30 min. Frozen kiwifruit pulp was homogenized and mixed with phosphate buffered saline (PBS) containing a protease inhibitor cocktail (Roche, Penzberg, Germany) (1:1 (w:v)). After centrifugation for 30 min at 20.000 g and 4 °C, the supernatant was dialyzed against PBS over 12h at 4 °C. The extract was then aliquoted and stored at −80 °C. The protein concentration was determined by the Coomassie Plus Protein Assay (Pierce, Rockford, IL, USA) according to the manufacturer’s protocol.

Kiwi extract was mixed with NuPAGE® LDS sample buffer (Invitrogen, Carlsbad, CA, USA) with the addition of 0.05 M dithiothreitol (DTT) and heated at 70 °C for 10 min. Molecular weight (MW) markers (Cat. No. LC5925, Invitrogen) were used to estimate sample MW. Electrophoresis was carried out at 100V for one hour by using NuPAGE® Novex Bis-Tris 12 well Gel 4-12% (Invitrogen).
Proteins were transferred to Immobilon-P transfer membrane (Millipore, Bedford, MA, USA) by electroelution at 30 V for one hour and stained with ImperialTM Protein Stain (Pierce, Rockford, IL, USA) to test the quality of transfer and the total protein content.

Skin tests were performed with commercial extracts in 19 patients, with positive results in all of them. SPT with fresh kiwifruit pulp were positive in all 21 patients tested.
Six out of 15 children (40%) tested had undetectable levels of serum kiwifruit-specific IgE (<0.35 kUA/L).

3.3. Detection of IgE-Binding Proteins in the Kiwifruit Extract

Protein staining of the kiwifruit extract separated by SDS-PAGE showed several bands distributed in the range of 12 to 38 kDa (Figure 1). 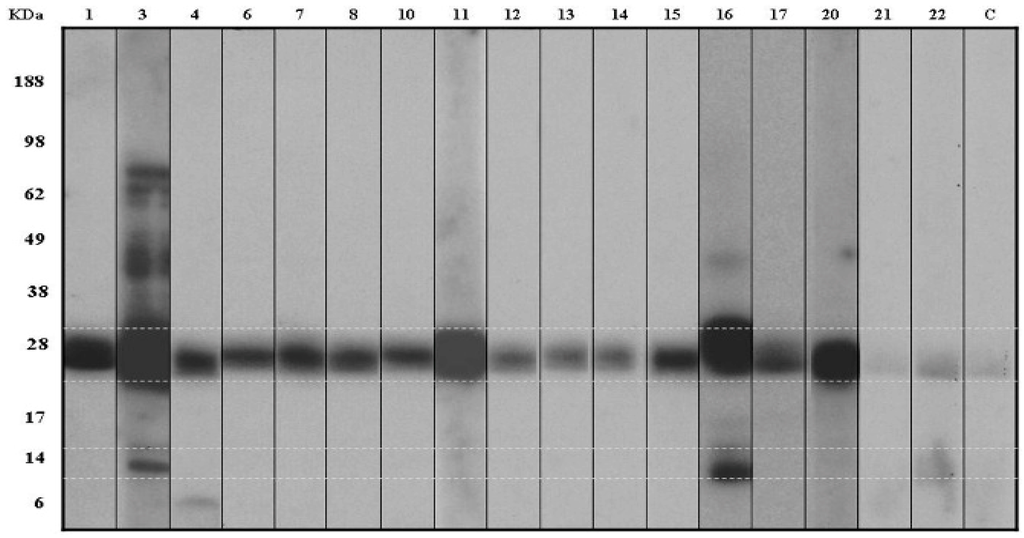 The 28 kDa, 24 kDa, and 15 kDa bands of SDS-PAGE were excised from the gel for sequence analysis. Peptides were compared with known proteins in the database. The 28 kDa protein was confirmed to be the known major allergen, actinidin (Act d 1). The 24 kDa protein corresponded to a thaumatin-like protein (Act d 2) and the third protein with MW of 15 kDa, showed 67% homology to kiwellin (Act d 5). The sequences of three proteins are indicated below (including Table 2, Table 3 and Table 4):

3.5. Evaluation of the ISAC

We would like to thank Kaye Speicher from the Wistar Institute Protein Microchemistry/Mass spectrometry Facility for their great work and helpful discussions.

All the authors certify that there is no conflict of interest with any financial organization regarding the material discussed in the manuscript.