Expression and Change of miRs 145, 221 and 222 in Hypertensive Subjects Treated with Enalapril, Losartan or Olmesartan
Previous Article in Special Issue

The intervention with the Mediterranean diet (MD) pattern has evidenced short-term anti-inflammatory effects, but little is known about its long-term anti-inflammatory properties at molecular level. This study aims to investigate the 3-year effect of MD interventions compared to low-fat diet (LFD) on changes on inflammatory biomarkers related to atherosclerosis in a free-living population with a high-risk of cardiovascular disease (CD). Participants (n = 285) in the PREDIMED trial were randomly assigned into three intervention groups: MD with extra-virgin olive oil (EVOO) or MD-Nuts, and a LFD. Fourteen plasma inflammatory biomarkers were determined by Luminex assays. An additional pilot study of gene expression (GE) was determined by RT-PCR in 35 participants. After 3 years, both MDs showed a significant reduction in the plasma levels of IL-1β, IL-6, IL-8, TNF-α, IFN-γ, hs-CRP, MCP-1, MIP-1β, RANTES, and ENA78 (p < 0.05; all). The decreased levels of IL-1β, IL-6, IL-8, and TNF-α after MD significantly differed from those in the LFD (p < 0.05). No significant changes were observed at the gene level after MD interventions, however, the GE of CXCR2 and CXCR3 tended to increase in the control LFD group (p = 0.09). This study supports the implementation of MD as a healthy long-term dietary pattern in the prevention of CD in populations at high cardiovascular risk. View Full-Text
Keywords: dietary pattern; nutrition; inflammation; gene expression; cardiovascular diseases dietary pattern; nutrition; inflammation; gene expression; cardiovascular diseases
►▼ Show Figures 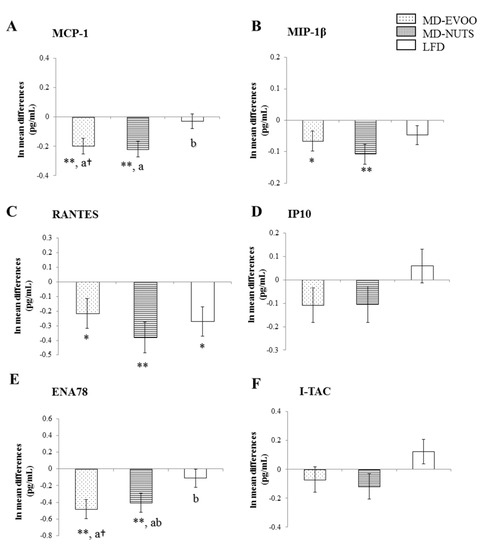