Metronidazole- and Amoxicillin-Loaded PLGA and PCL Nanofibers as Potential Drug Delivery Systems for the Treatment of Periodontitis: In Vitro and In Vivo Evaluations
Previous Article in Journal

As a kind of metabolically triggered inflammation, obesity influences the interplay between the central nervous system and the enteral environment. The present study showed that β-elemene, which is contained in various plant substances, had effects on recovering the changes in metabolites occurring in high-fat diet (HFD)-induced obese C57BL/6 male mice brains, especially in the prefrontal cortex (PFC) and hippocampus (HIP). β-elemene also partially reversed HFD-induced changes in the composition and contents of mouse gut bacteria. Furthermore, we evaluated the interaction between cerebral metabolites and intestinal microbiota via Pearson correlations. The prediction results suggested that Firmicutes were possibly controlled by neuron integrity, cerebral inflammation, and neurotransmitters, and Bacteroidetes in mouse intestines might be related to cerebral aerobic respiration and the glucose cycle. Such results also implied that Actinobacteria probably affected cerebral energy metabolism. These findings suggested that β-elemene has regulatory effects on the imbalanced microbiota-gut-brain axis caused by obesity and, therefore, would contribute to the future study in on the interplay between cerebral metabolites from different brain regions and the intestinal microbiota of mice. View Full-Text
Keywords: obesity; inflammation; central nervous system; gut bacteria; pearson correlations obesity; inflammation; central nervous system; gut bacteria; pearson correlations
►▼ Show Figures 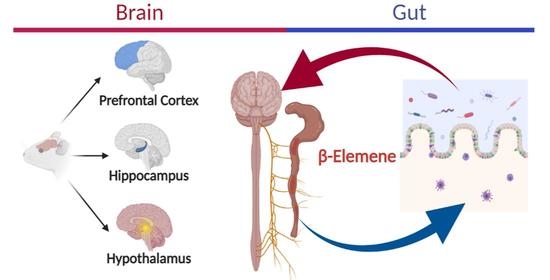