Alzheimer’s disease (AD) and diabetes mellitus (DM) are known to have a shared molecular mechanism. We aimed to identify shared blood transcriptomic signatures between AD and DM. Blood expression datasets for each disease were combined and a co-expression network was used to construct modules consisting of genes with similar expression patterns. For each module, a gene regulatory network based on gene expression and protein-protein interactions was established to identify hub genes. We selected one module, where COPS4, PSMA6, GTF2B, GTF2F2, and SSB were identified as dysregulated transcription factors that were common between AD and DM. These five genes were also differentially co-expressed in disease-related tissues, such as the brain in AD and the pancreas in DM. Our study identified gene modules that were dysregulated in both AD and DM blood samples, which may contribute to reveal common pathophysiology between two diseases. View Full-Text
Keywords: Alzheimer’s disease; diabetes mellitus; blood gene expression Alzheimer’s disease; diabetes mellitus; blood gene expression
►▼ Show Figures 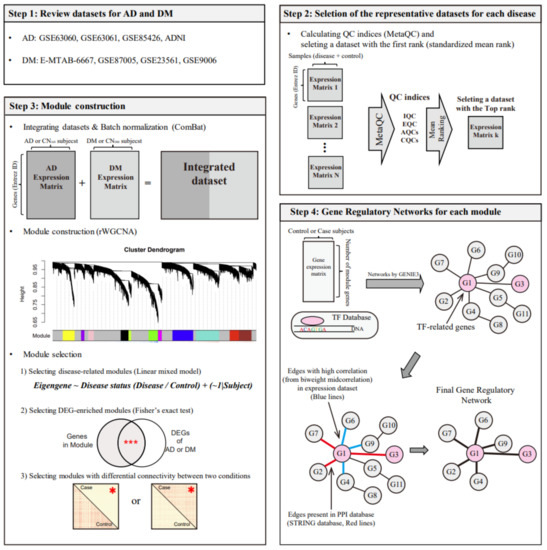