EDTA Chelation Therapy in the Treatment of Neurodegenerative Diseases: An Update
Next Article in Special Issue

Extracellular Vesicles (EVs) and Pancreatic Cancer: From the Role of EVs to the Interference with EV-Mediated Reciprocal Communication
Previous Article in Special Issue

Mediterranean Diet as a Tool to Combat Inflammation and Chronic Diseases. An Overview

The modification of the microbiome through fecal microbiota transplantation (FMT) is becoming a very promising therapeutic option for inflammatory bowel disease (IBD) patients. Our pilot study aimed to assess the effectiveness of multi-session FMT treatment in active ulcerative colitis (UC) patients. Ten patients with UC were treated with multi-session FMT (200 mL) from healthy donors, via colonoscopy/gastroscopy. Patients were evaluated as follows: at baseline, at week 7, and after 6 months, routine blood tests (including C reactive protein (CRP) and calprotectin) were performed. 16S rRNA gene (V3V4) sequencing was used for metagenomic analysis. The severity of UC was classified based on the Truelove–Witts index. The assessment of microbial diversity showed significant differences between recipients and healthy donors. FMT contributed to long-term, significant clinical and biochemical improvement. Metagenomic analysis revealed an increase in the amount of Lactobacillaceaea, Micrococcaceae, Prevotellaceae, and TM7 phylumsp.oral clone EW055 during FMT, whereas Staphylococcaceae and Bacillaceae declined significantly. A positive increase in the proportion of the genera Bifidobacterium, Lactobacillus, Rothia, Streptococcus, and Veillonella and a decrease in Bacillus, Bacteroides, and Staphylococcus were observed based on the correlation between calprotectin and Bacillus and Staphylococcus; ferritin and Lactobacillus, Veillonella, and Bifidobacterium abundance was indicated. A positive change in the abundance of Firmicutes was observed during FMT and after 6 months. The application of multi-session FMT led to the restoration of recipients’ microbiota and resulted in the remission of patients with active UC. View Full-Text
Keywords: fecal microbiota transplantation (FMT); inflammatory bowel disease (IBD); ulcerative colitis (UC); gut microbiota fecal microbiota transplantation (FMT); inflammatory bowel disease (IBD); ulcerative colitis (UC); gut microbiota
►▼ Show Figures 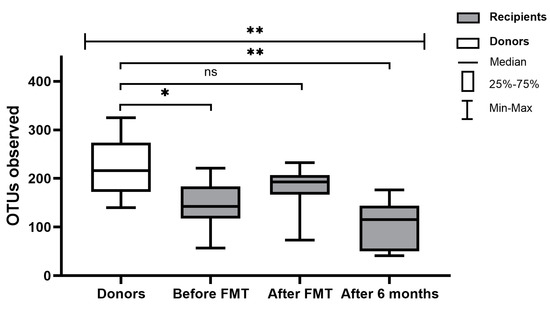