Mesenchymal Stem Cells: A Trump Card for the Treatment of Diabetes?

Experimental and clinical studies of cardiac pathology associated with epilepsy have demonstrated an impact on the autonomic nervous system (ANS). However, the underlying molecular mechanism has not been fully elucidated. Molecular investigation of the neurotransmitters related receptor and ion channel directing ANS might help in understanding the associated mechanism. In this paper, we investigated the role of acetylcholine (ACh), which demonstrates both sympathetic and parasympathetic roles in targeted expression in terms of the relevant receptor and ion channel. Inwardly rectifying potassium (Kir) channels play a significant role in maintaining the resting membrane potential and controlling cell excitability and are prominently expressed in both the excitable and non-excitable tissues. The immunoreactivity of ACh-activated Kir3.1 channel and muscarinic ACh receptors (M2) in autonomic centers such as the brainstem, vagus nerve (VN) and atria of heart was confirmed by both histological staining and pathological tissue analysis. Significant upregulations of Kir3.1 and M2 receptors were observed in pentylenetetrazol (PTZ)-kindled epileptic rats for all related tissues investigated, whereas no pathological difference was observed. These findings provide proof-of-concept that changes in ACh-associated immunoreactivity might be linked to the ANS dysfunctions associated with epilepsy. View Full-Text
Keywords: acetylcholine; Kir channels; M2 receptors; epilepsy acetylcholine; Kir channels; M2 receptors; epilepsy
►▼ Show Figures 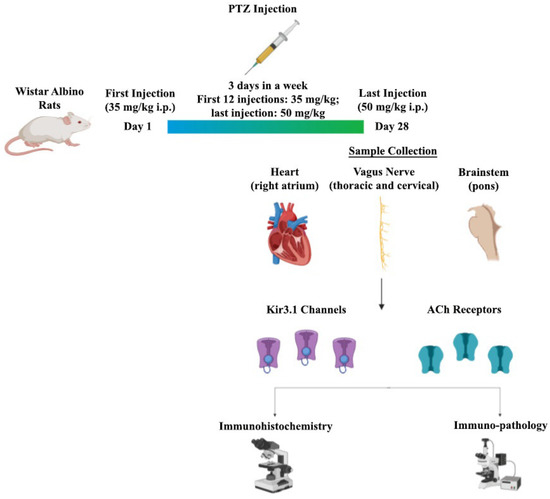