Oncostatin M (OSM), as one of the gp130/IL-6 family of cytokines, interacts with receptor complexes that include the gp130 signaling molecule and OSM receptor β OSMRβ chain subunits. OSMRβ chains are expressed relatively highly across a broad array of connective tissue (CT) cells of the lung, such as fibroblasts, smooth muscle cells, and epithelial cells, thus enabling robust responses to OSM, compared to other gp130 cytokines, in the regulation of extracellular matrix (ECM) remodeling and inflammation. OSMRβ chain expression in lung monocyte/macrophage populations is low, whereas other receptor subunits, such as that for IL-6, are present, enabling responses to IL-6. OSM is produced by macrophages and neutrophils, but not CT cells, indicating a dichotomy of OSM roles in macrophage verses CT cells in lung inflammatory disease. ECM remodeling and inflammation are components of a number of chronic lung diseases that show elevated levels of OSM. OSM-induced products of CT cells, such as MCP-1, IL-6, and PGE2 can modulate macrophage function, including the expression of OSM itself, indicating feedback loops that characterize Macrophage and CT cell interaction. View Full-Text
Keywords: Oncostatin M; gp130; IL-6; cytokines; connective tissue; macrophages; lung inflammation; ECM remodeling Oncostatin M; gp130; IL-6; cytokines; connective tissue; macrophages; lung inflammation; ECM remodeling
►▼ Show Figures 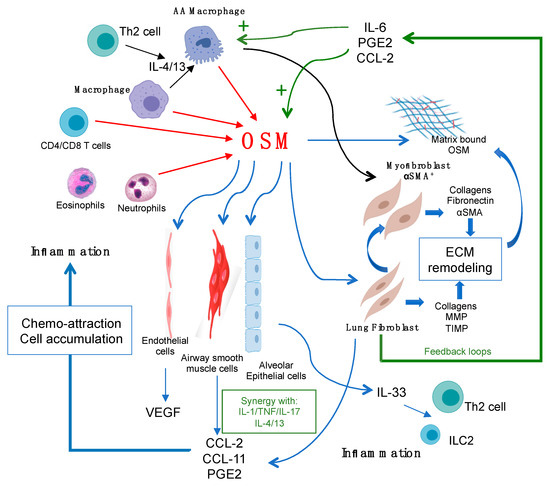