Significant inter-individual variation in terms of susceptibility to several stress-related disorders, such as myocardial infarction and Alzheimer’s disease, and therapeutic response has been observed among healthy subjects. The molecular features responsible for this phenomenon have not been fully elucidated. Proteomics, in association with bioinformatics analysis, offer a comprehensive description of molecular phenotypes with clear links to human disease pathophysiology. The aim of this study was to conduct a comparative plasma proteomics analysis of glucocorticoid resistant and glucocorticoid sensitive healthy subjects and provide clues of the underlying physiological differences. For this purpose, 101 healthy volunteers were given a very low dose (0.25 mg) of dexamethasone at midnight, and were stratified into the 10% most glucocorticoid sensitive (S) (n = 11) and 10% most glucocorticoid resistant (R) (n = 11) according to the 08:00 h serum cortisol concentrations determined the following morning. One month following the very-low dose dexamethasone suppression test, DNA and plasma samples were collected from the 22 selected individuals. Sequencing analysis did not reveal any genetic defects in the human glucocorticoid receptor (NR3C1) gene. To investigate the proteomic profile of plasma samples, we used Liquid Chromatography–Mass Spectrometry (LC-MS/MS) and found 110 up-regulated and 66 down-regulated proteins in the S compared to the R group. The majority of the up-regulated proteins in the S group were implicated in platelet activation. To predict response to cortisol prior to administration, a random forest classifier was developed by using the proteomics data in order to distinguish S from R individuals. Apolipoprotein A4 (APOA4) and gelsolin (GSN) were the most important variables in the classification, and warrant further investigation. Our results indicate that a proteomics signature may differentiate the S from the R healthy subjects, and may be useful in clinical practice. In addition, it may provide clues of the underlying molecular mechanisms of the chronic stress-related diseases, including myocardial infarction and Alzheimer’s disease. View Full-Text
Keywords: glucocorticoids; glucocorticoid receptor; proteomics; tissue glucocorticoid sensitivity glucocorticoids; glucocorticoid receptor; proteomics; tissue glucocorticoid sensitivity
►▼ Show Figures 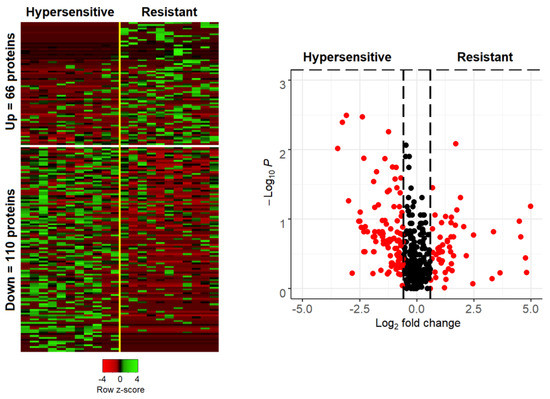