Prevalence and Associated Factors of Depression in Medical Students in a Northern Thailand University: A Cross-Sectional Study
Previous Article in Journal

Factors beyond Workplace Matter: The Effect of Family Support and Religious Attendance on Sustaining Well-Being of High-Technology Employees

The study utilized a cross-sectional design and a convenient sample of nurses and clerical employees of the General Hospital of Vienna. The administrative staff of the General Hospital of Vienna, as well as the nurses of the various clinics of this hospital, were contacted in February 2016 via email by the heads of the corresponding departments (head nurse, head of the human resource department), who forwarded an invitation letter by the third author of this paper asking them to participate in an online survey (via www.soscisurvey.de, accessed on 30 March 2016) on rest breaks during worktime. A link to the online survey was provided, together with a password to access the survey. The inclusion criteria were a minimum of twenty workhours per week, and a minimum of six workhours per day, as employees are required to take breaks if they work six hours or more per day according to the Austrian Working Times Act. Participation in the survey was voluntary and anonymous, meaning that respondents could not be identified, and managers did not receive feedback on employee participation or responses. A total of 365 individuals initially responded to the questionnaire. After excluding employees with incomplete data (n = 38), and limited daily (<6 h/day, n = 2) and weekly (<20 h/week, n = 1) working hours, both restricting the right or the opportunity for work breaks, we used the remaining sample of 324 employees (66 men, 258 women, mean age = 41.4, SD 11.2, age range 18–64) for further analyses. Sample characteristics are presented in Table 1.

In the survey, we assessed the rest-break behavior of the employees by asking them if they take lunch breaks, and how many rest breaks they take additionally during a typical workday. To determine the dependent variable rest-break frequency, i.e., the relative number of rest breaks taken per hour, the sum of the lunch breaks and the additional rest breaks was calculated and divided by the number of hours typically worked per day.
The main independent variables were the four determinants of behavior, according to the theory of planned behavior: attitude, subjective norm, behavioral control, and intention. The items were generated and phrased in accordance with the description of questionnaire construction stated in [33]. Additional items assessing salient beliefs were generated on the basis of nine interviews with nurses, clerical employees, and technicians. In these interviews, the advantages and hindrances of regularly taking rest breaks were explored. To assess the structure of the three TPB variables, an exploratory factor analysis was conducted in advance, revealing three factors. All items, except the one assessing the descriptive norm (“most of my colleagues in comparable positions regularly take breaks from work”), loaded in the expected factors, the latter loading in the control factor (factor loading = 0.60). Therefore, this item was removed. The final TPB variables, plus the factor loadings, are displayed in Table 2. The internal consistency of the scales (Cronbach’s alpha) were satisfactory, with α = 0.81 for attitude, α = 0.71 for subjective (injunctive) norm, and α = 0.75 for behavioral control.
As it is likely that nurses have less job control compared to administrative staff, e.g., less control over the timing of breaks because of patient care obligations [30], we assumed that intention would affect rest-break behavior in nurses to a smaller degree than in clerical employees and, hence, we included an interactive term between occupation and intention (occupation * intention) as an additional variable.
Rest-break intention was assessed with a single item (“I intend to take rest breaks regularly the next three months”). All TPB items were assessed on 7-point Likert scales, ranging from 1 = ”absolutely not”, to 7 = ”totally applies”.

The characteristics of the two study groups (nurses, clerical employees), as well as the means and standard deviations of the study variables, are displayed in Table 1. Compared to clerical employees, nurses smoked less, had longer workdays due to twelve-hour shifts, took lunch breaks less often, and took fewer rest breaks per working hour. In addition, nurses tended to have a more positive attitude towards rest breaks but experienced less control over the taking of rest breaks. The results of the factor analysis, including the items of the TPB variables, are shown in Table 2. The analysis supports the notion of three independent factors with an Eigenvalue of ≥ 1.15, items loading highly in the expected factors.
The results of the linear regression analyses are displayed in Table 3. The predictors of rest-break intention, attitude, and behavioral control, but not the injunctive form of the subjective norm, were positively associated with intention, thus partly supporting Hypothesis 1. Rest-break intention was not associated with any of the individual characteristics.
Regarding rest-break frequency as a behavioral outcome, i.e., the average number of rest breaks individuals took per hour, attitude, and behavioral control, but not the injunctive form of the subjective norm, positively predicted rest-break behavior (Model 2), thus partly supporting Hypothesis 2.
Using the PROCESS Plugin for SPSS by Andrew Hayes [34] (bias-corrected bootstrapping with 5000 samples; adjusted for other variables shown in Table 3), we found that rest-break intention indirectly affected the relationships between positive attitudes (b = 0.05, SE = 0.02, 95% CI [0.016, 0.092]), as well as behavioral control (b = 0.08, SE = 0.03, 95% CI [0.025, 0.130]) and rest-break frequency, but not between the subjective norm and rest-break frequency (b = 0.02, SE = 0.01, 95% CI [−0.005, 0.043]). This partly supports Hypothesis 3. Together, the four variables of the theory of planned behavior explained 11% of the variance in rest-break frequency.
Finally, the association between rest-break intention and rest-break frequency was stronger for clerical employees (b = 0.05, t = 4.47, p < 0.001) than for nurses (b = 0.01, t = 2.31, p = 0.022), as can be seen in the significant interactive term (Table 3, Model 4), thus supporting Hypothesis 4. This relationship is illustrated in Figure 1 (slope tests and visualization of the interaction effect with Excel template from Jeremy Dawson [35]). Rest-break intention affected behavior to a greater degree in clerical employees than in nurses.
Apart from the TPB variables, rest-break frequency was also strongly associated with the sex, age, smoking status, and occupation of the individuals. A higher rest-break frequency was reported by males compared to females, by younger compared to older employees, by smokers compared to nonsmokers, and by clerical employees compared to nurses (Table 3).
Plot based on linear regression analysis, as illustrated in Table 3.

Our study is not without limitations. First, we conducted a retrospective and cross-sectional questionnaire study. Therefore, we can only interpret associations, not causal relations between variables. Moreover, the subjective estimates of break behavior might have been biased by cognitive factors relating to memory or social desirability [50]. However, the mean and standard deviation of rest-break frequencies in the present study were similar to that of a previous diary study assessing rest breaks over several work days [42], suggesting that the assessment of rest breaks in the present study is valid. Furthermore, our research focused on two specific occupations differing in the amount of control over working time. It remains unclear to what extent our results can be generalized to other occupations with different job characteristics because lower time control is positively related to workload [51], which might further impair break behavior [30,41]. This should be investigated in future research, additionally, by assessing key job characteristics.

Rest breaks are known to improve the well-being, health, and performance of employees, but factors that affect the triggering of breaks are largely unknown. Our results reveal that the break intention of employees, i.e., the voluntary planning of break behavior, is such a driver, even though the association between intention and rest-break behavior was small. In addition, behavioral control had a positive impact on rest-break behavior, exceeding that of intention, thereby also explaining the differences between the two occupations. Therefore, next to employee education (i.e., by supervisor or occupational safety engineer), which might strengthen positive attitudes towards recovery behavior, the importance of job control as a factor determining rest-break behavior has to be taken into account. Our results suggest that organizations should increase the temporal flexibility of employees (i.e., give them more control regarding the duration and timing of tasks during the workday) if they intend to improve their break frequencies. The limited impact of intention also suggests that making use of situational factors in terms of nudging (e.g., digital break reminders or ‘break’ posters on the walls of the work site) may help foster rest-taking behavior.

This research received no external funding. Johannes Wendsche was supported by a research grant from the German Federal Institute for Occupational Safety and Health (F 2431) during the data analysis and publication of this study.

Upon request, the corresponding author will provide the data for private use. 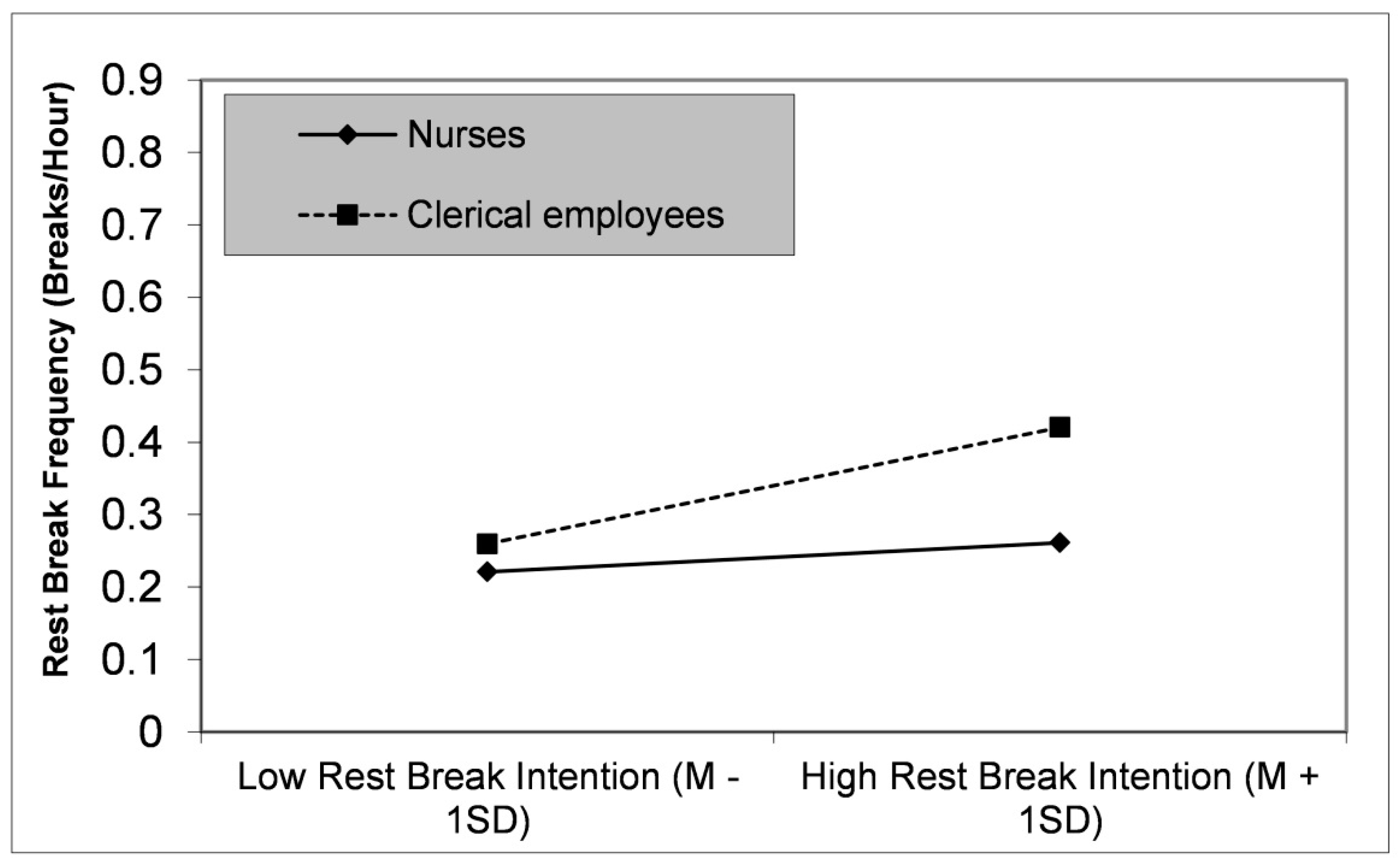