Relationship between the Functional Oral Intake Scale (FOIS) and the Self-Efficacy Scale among Cancer Patients: A Cross-Sectional Study
Next Article in Special Issue

Patients Taking Direct Oral Anticoagulants (DOAC) Undergoing Oral Surgery: A Review of the Literature and a Proposal of a Peri-Operative Management Protocol
Previous Article in Journal

Oral granular cell tumor (GCT) is a relatively rare, benign lesion that can easily be misdiagnosed. Particularly, the presence of pseudoepitheliomatous hyperplasia might, in some cases, lead to the hypothesis of squamous cell carcinoma. Surgical excision is the treatment of choice. Recurrence has been reported in up to 15% of cases treated with conventional surgery. Here, we reported a case of GCT of the tongue in a young female patient, which was successfully treated through 445 nm diode laser excision. Laser surgery might reduce bleeding and postoperative pain and may be associated with more rapid healing. Particularly, the vaporization effect on remnant tissues could eliminate GCT cells on the surgical bed, thus hypothetically leading to a lower rate of recurrence. In the present case, complete healing occurred in 1 week, and no recurrence was observed after 6 months. Laser surgery also allows the possibility to obtain second intention healing. Possible laser-induced histopathological artifacts should be carefully considered.
Keywords: granular cell tumor; diode laser; pseudoepitheliomatous hyperplasia; oral surgery granular cell tumor; diode laser; pseudoepitheliomatous hyperplasia; oral surgery

Granular cell tumor (GCT), also called the Abrikosoff tumor, is a relatively rare benign lesion, presumptively originating from Schwann cells. GCT has been described for the first time by Abrikosoff in 1926 and named “myoblastic tumor”, based on its supposed origin from muscle cells [1].
The estimated incidence of oral GCT is approximately 1:1,000,000 population per year [2]. The tumor is relatively more common among black people [3]. GCT can affect people at any age, but it is commonly diagnosed between the second and sixth decades of life [4]. Some studies show a predilection for females [5].
GCT can be found in any part of the body. Common locations are skin, respiratory tract, breast, gastrointestinal tract. Up to 50% of lesions have been reported to arise in the head and neck region, with a peculiar predilection for the tongue. Other oral sites of occurrence are the lips, the retrocomissural area, and buccal mucosa, followed by the palate, uvula, and parotid gland [4].
Oral GCT typically appears as a single, sessile, asymptomatic whitish nodule that gradually increases in size. Cases of multiple lesions have been reported [5]. Tumor surface is usually smooth, with few cases presenting ulceration. Size is commonly less than 3 cm. Pain is uncommon, but some patients may experience discomfort during tooth brushing, eating spicy food, and oral trauma [6].
Malignant transformation has rarely been reported, and only 2% of cases have documented to metastasize to distant sites [4].
Very few cases of GCT, successfully managed through different types of laser, have been reported in the literature, but no one of these using diode laser.
The first application of diode laser in dentistry dates back in the mid-90s. Common ranges of wavelengths cover 810, 940 and 980 nm. Many advantages have been described in association with the use of diode laser: definite cutting edge, hemostasis, no need for suturing, reduction in surgical time, less post-surgical pain, and ease of use. Disadvantages reported in the literature include delayed wound healing and possible carbonized borders of the surgical field [7].
Here, we reported a case of GCT of the tongue in a young female patient, which was successfully treated through 445 nm diode laser excision.

A 35-year-old white woman was referred by her dentist to the section of Oral Medicine and Oral Surgery of the University of Parma, Italy, because of the presence of a painless, solitary nodule on the dorsum of the tongue.
The patient reported that the swelling was initially small, and it gradually increased in size over the last few months.
At the clinical evaluation, it was noticeable a well-defined, non-tender, and non-fluctuant whitish lesion, with smooth borders, on the left side of the dorsum of the tongue. The lesion measured approximately 1 cm. The days before, the patient reported small ulceration, which could not be seen on the day of surgery (Figure 1).
Differential diagnosis included pyogenic granuloma, GCT, lipoma, and traumatic fibroma of unknown cause.
The patient reported no history of smoking and alcohol consumption, and the anamnesis was negative for systemic disorders.
The lesion was excised through a diode laser (K Laser Blue Dental©, Eltech K-Laser s.r.l., Treviso, Italy, 3.5 W, continuous wave, 445 nm) under local anesthesia, including 0.2 cm of surrounding clinically healthy tissue (Figure 1b–d).
Taking into account the likely benign nature of the lesion, we chose to perform an excision with about 1 mm of clinically healthy tissue around the nodule, including deep tissues.
Informed consent was obtained by the patient (provided as Supplementary Material).

Histopathological examination revealed, in the connective compartment, the presence of large, spindle, oval to polygonal cells with small, uniform eosinophilic granules and small round to oval nuclei, which stained strongly positive to S-100 protein. Nuclei were small, all prominent, vesicular, and dark. Cells, arranged in nests, sheets, and fascicles, were not encapsulated; they permeated the collagen fibers, skeletal muscle, adipocytes, blood vessels, and nerves. The overlying epithelium was slightly hyperplastic with focal features of pseudoepitheliomatous hyperplasia that could provide confusion with squamous cell carcinoma; however, lack of nuclear hyperplasia or pleomorphism and the presence of granular cells could differentiate this condition.
Vascularity was prominent in most cases.
No cellular atypia or mitotic figures were seen.
We also noticed one important aspect that differentiated a GCT from a malignant tumor: chronic inflammatory cells were intensively present in squamous cell carcinomas, but not seen in GCT (Figure 2). On the basis of such histopathological features, a final diagnosis of GCT was rendered.
Ferreira et al. also underlined the importance of the immunohistochemical panel in determining the biological aspects of the lesion and the final diagnosis. The specific antibodies used were S-100, vimentin, CD68, p53, Ki-67, E-cadherin, collagen IV, and cytokeratin AE1/AE3. Their results showed a strong nuclear and cytoplasmic staining of S-100 protein and vimentin. CD68 revealed strong staining in the cytoplasm of granular cells. The expression of p53 was found in the nuclei of basal and parabasal cells of normal epithelium, as well as diffuse staining in the granular cells. In addition, cells of the basal layer of the epithelium were weakly marked with Ki-67. E-cadherin showed a uniform “membranous staining” in the overlying epithelium. Some regions of the endothelium were marked with collagen IV. Finally, granular cells were negative for cytokeratin AE1/AE3 [5].
Complete healing occurred in 1 week, and no recurrence was observed in the admittedly short follow-up of 6 months (Figure 3).

In conclusion, the present case gives support to the hypothesis that 445 nm laser is a reliable tool for the surgical excision of GCT and similar benign lesions of the oral mucosa. Such a device is probably associated with the possibility of reducing the risk of recurrences. Moreover, laser surgery has a well-established utility in reducing post-surgical pain and increasing the clinician comfort, eliminating, in most cases, the intraoperative bleeding [30]. It is important to highlight here that more long-term prospective studies are needed both at clinical and histopathological levels in order to establish the advantages of laser surgery on oral soft tissues. Particularly, the reliability of laser treatment of potentially malignant disorders and malignant lesions should be confirmed by long-term follow-up clinical randomized trials.

Conception and design of the study, M.V.V.; Acquisition of data: laboratory or clinical/literature search, M.V.V. and C.D.B.; Analysis and interpretation of data collected, R.B.-M. and L.C.; Drafting of the article and/or critical revision, M.V.V., P.V., and M.M.; Final approval and guarantor of the manuscript, M.M. All authors have read and agreed to the published version of the manuscript. 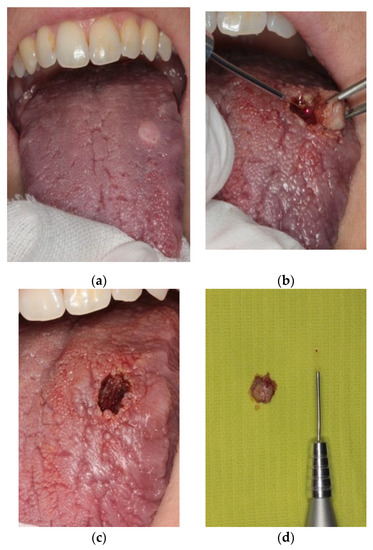 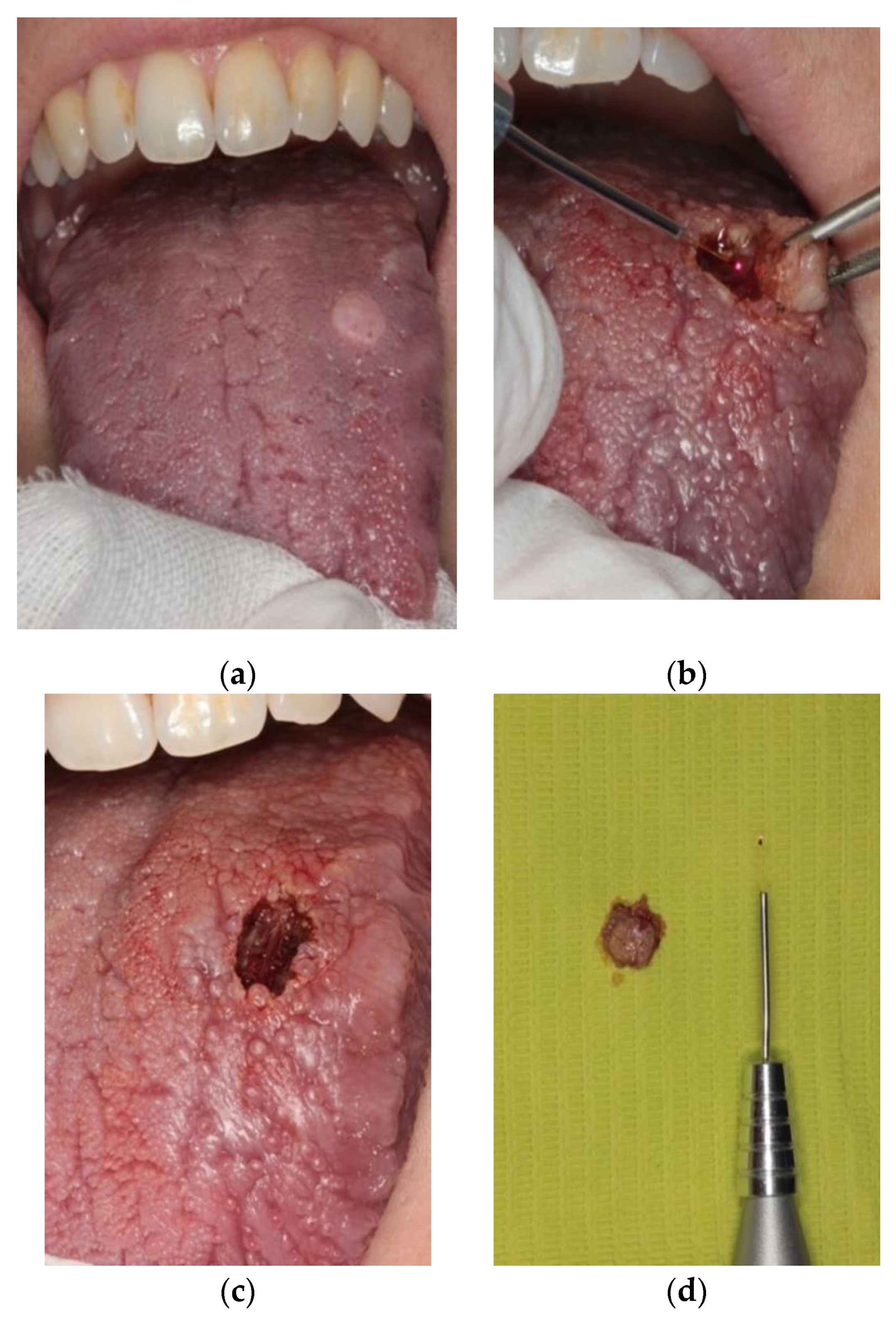 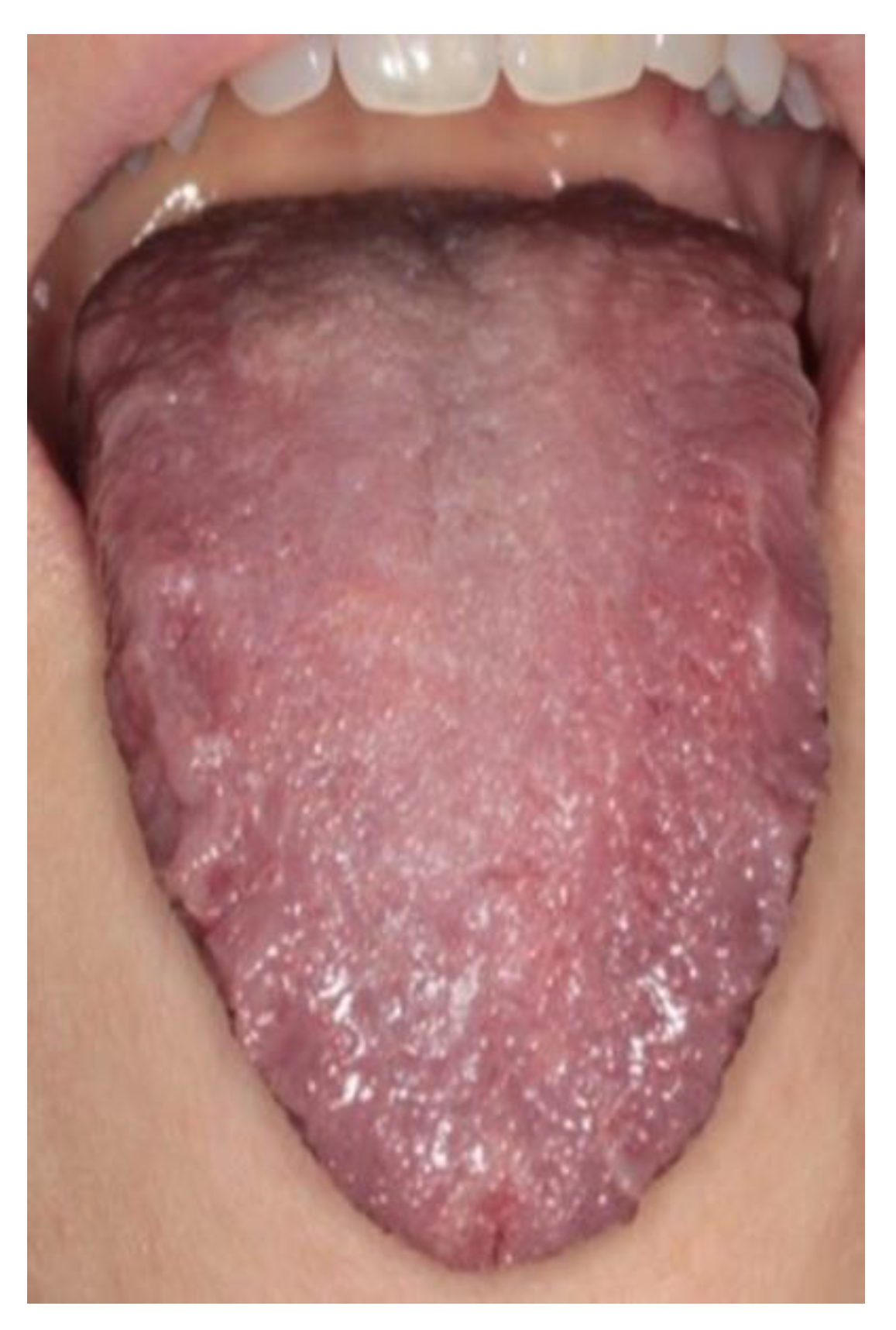