The Role of Family Physicians in a Pandemic: A Blueprint
Previous Article in Journal

Frequent attenders (FAs) have an impact on the medical resources and the quality of care. In Taiwan, the characteristics of FAs remain unclear in primary care. Outpatient data were screened from a central clinic within six surrounding fishing villages in northeastern Taiwan in 2017. FAs were defined as those who made >18 visits in one year, and those who made ≤18 visits were defined as non-frequent attenders (NFAs). Data of FAs and NFAs were collected and compared. The major diagnoses were reported using International Classifications of Diseases, Tenth Edition (ICD-10) codes. A total of 1586 subjects and 9077 visits were enrolled, including 119 FAs and 1467 NFAs. FAs had a more advanced age compared to NFAs. Both FAs and NFAs had more visits in summer. FAs had consumed high prescriptions and related costs. FAs also had higher therapeutic and first visit costs than NFAs. Comparing with age- sex-matched NFAs, FAs were positively associated with musculoskeletal diseases (M00-M99), hematological diseases (D50-D89), endocrine diseases (E00-E90), and mental disorders (F00-F99). Large-scale local datasets and suitable definitions of FAs for Taiwanese subjects are needed.
Keywords: community medicine; family medicine; frequent attendance; ICD-10 code; primary care; Taiwan community medicine; family medicine; frequent attendance; ICD-10 code; primary care; Taiwan

Frequent attenders (FAs) who utilize a number of medical resources with limited therapeutic effect are not rare in outpatient services. In Western countries that have public doctors and referral systems, this phenomenon has been widely discussed due to its impact on the distribution of medical resources and quality of care. Previous studies in Europe and the United Kingdom have reported certain risk factors and characteristics for FAs, including female predominance, psychological/somatoform disorders, chronic obstructive pulmonary diseases, diabetes mellitus, and cancer [1,2,3,4].
In Taiwan, the National Health Insurance (NHI) program since 1995 encouraged the expansion of private medical services, including hospitals and primary clinics. Currently, the NHI program in Taiwan covers 99% of the population and provides easily accessible medical care, short waiting times, relatively low health care costs, and affordable insurance fees [5,6]. Due to the large number of primary clinics and fee-for-service payment with low out-of-pocket fees, Taiwan has accessible primary care services, and patients make a higher mean number of visits compared with Western countries. In 2017, Taiwanese residents utilizing primary care made a mean of 11.4 visits per year, and following the addition of hospitals-affiliated outpatient services this has increased to 15.4 visits per year [7]. Comparing with members of Organization for Economic Co-operation and Development, the mean visits per year of Taiwan were listed among the top three countries, just second to South Korea and Japan [8,9]. However, differences in the quality and distance between urban and rural health care services remain inevitable [10]. Due to limited medical resources and countrywide budgets, the existence and increasing number of FAs are expected to impact the quality of care and overall utilization of medical care. At present in Taiwan, there are no relevant studies on FAs and their overall impact. The existence of FAs is inevitable; however, their characteristics in Taiwan remain unclear.
In contrast to urban or suburban areas, the importance of primary care was more significant in remote areas. Based on the health care experiences and accumulated data of managing a university hospital-affiliated clinic in a remote area of northeastern Taiwan, the aim of the current study was to investigate the characteristics of FAs compared with non-frequent attenders (NFAs) in primary care of remote communities.

Descriptive and retrospective analyses were performed. Outpatient data were obtained from a central primary care clinic on the northeast coast of Taiwan in 2017 which served six fishing villages. The clinic and its background communities were located in a remote area, 30 km from a major regional hospital. Having been affiliated with the major regional hospital from 2014–2018, the clinic provided primary care, undergraduate medical education, and research data. The population of the six fishing villages was 4816, estimated in February 2018 [11]. Patients with incomplete data including age or sex were excluded from the study. The study design, and inclusive and exclusive criteria are shown in Figure 1.

There is currently no standard definition of a FA. In Western countries, FAs are often defined as those accounting for the top 10% of all visits, or those who visit over 4 times per year [12,13,14]. In this study, FAs were defined as individuals who made >18 visits in 2017, and NFAs were defined as those who made ≤18 visits in 2017. We defined FAs as those who made >18 visits per year according to the reported average number of visits by the Bureau of NHI [7], the number of subjects, and correlations of logistic regression. It could achieve enough counts of a research group and presented significant differences between FAs and NFAs while the cut point was set at 18 visits per year.
The seasons were defined as follows: Spring (March to May), summer (June to August), autumn (September to November), and winter (December to February). From previous studies, seasonality could affect frequency of visits with some acute illness or complications of chronic illness, such as respiratory disease, trauma, cardiovascular diseases, and diabetes mellitus. However, it was still unclear if seasonality could affect FAs, and this study also investigated the issue. The medical costs were calculated automatically by in-clinic information software for claims data of the NHI program. According to the regulations of the Bureau of NHI, the definition of cost for diagnosis was payment of each visit for physicians, and the price differed by the level of medical institution and acute or chronic illness. In this study, cost for prescriptions refers to medications paid for by the NHI program. In addition, cost for therapeutics refers to non-medication services such as wound care and injections paid for by the NHI program. Cost for the first visit refers to the cost for the diagnosis at the subjects’ first attending visit, which costs more than subsequent fees for diagnoses.
The major diagnoses from each subject’s visit were defined according to The Tenth Revision of the International Statistical Classification of Diseases and Related Health Problems (ICD-10) codes. As well as general information on clinic visits, the outpatient data included an officially regulated adult preventive health survey, cancer screening, and smoking cessation services, which were classified as ICD-10 Z00-Z99 [15]. Due to being located in a remote area without pharmacists’ practices, the dispensing of prescriptions was performed by physicians at the setting clinic.
This study was approved by the Institutional Review Board of National Yang-Ming University Hospital (approval no. 2019 A016). The false hypothesis of this study was that FAs and age- and sex-matched NFAs had similar characteristics in community-based primary care.

In 2017, a total of 9097 visits made by 1586 subjects met the inclusion and exclusion criteria and were enrolled in this study; this included 119 FAs and 1467 NFAs. Among them, 568 subjects (35.8%) made one visit in 2017. Table 1 shows the demographic data of all the included patients. Compared with the NFAs, the FAs had a more advanced age and more were aged over 40 years.

The seasonal effect and medical costs are shown in Table 2. Both FAs and NFAs made more visits in the summer, and there was no significant difference between the two groups. In contrast to the NFAs, the FAs received a significantly higher number of prescriptions and averaged a higher cost of prescription per visit. The therapeutic and first visit costs of the FAs were also significantly higher than those of the NFAs.

3.3. Major Diagnoses of the Subjects’ Visits

3.4. Factors Correlated with the FAs

The significance of various factors between the FAs and age- and sex-matched NFAs are shown in Table 4. After multivariate logistic regression analysis with adjustments for age and sex, the FAs were not correlated with seasonality. Compared with NFAs, the FAs were positively associated with musculoskeletal diseases (M00-M99), hematological diseases (D50-D89, most diagnosed as anemia), endocrine diseases (E00-E90, most diagnosed as diabetes mellitus), and mental disorders (F00-F99). In contrast, FAs correlated negatively with infectious diseases (A00-B99), respiratory diseases (J00-J99), skin diseases (L00-L99), trauma (S00-T98), health surveys or consults (Z00-Z99), and ear diseases (H60-H95).

As mentioned in the introduction, this study investigated the characteristics of FAs compared with non-frequent attenders (NFAs) in primary care of remote communities. Compared with the age- and sex-matched NFAs, the positive associations with M00-M99, D50-D89, E00-E90, and F00-F99 indicated that the FAs often had musoskeletal, psychological, hematological, and metabolic/endocrine problems. The FAs also had an increased number of days on prescriptions. Both FAs and NFAs visited mostly in the summer, and their visits did not differ significantly. From the current study, we could realize unique health problems of FAs in remote primary care, and provided references and improvements of health care policies for remote regions. Local datasets for FAs in Taiwan have yet to be established. The current study is the first approach for FAs in primary care in Taiwan, and further studies are required to standardize the definition of a FA in Taiwan. Multiple-year or multiple-center studies of community health problems should be performed in follow-up studies, and these results should guide clinical practice to improve the quality of primary care for FAs.

The authors would like to thank the National Yang-Ming University Hospital for their permission to conduct the current study. The authors especially thank Chou-Shu Tseng, Yung-Han Dai, Chiu-Yu Huang, and Xiao-Chu Lan, who were colleagues at Daxi Clinic, for their help in practicing primary care. The authors also thank the community workers in the remote northeastern coastal area of Yilan County for their support.

The authors declare that they have no conflicts of interest related to the subject matter or materials discussed in this article. The study did not receive any financial funds from official or private institutes. 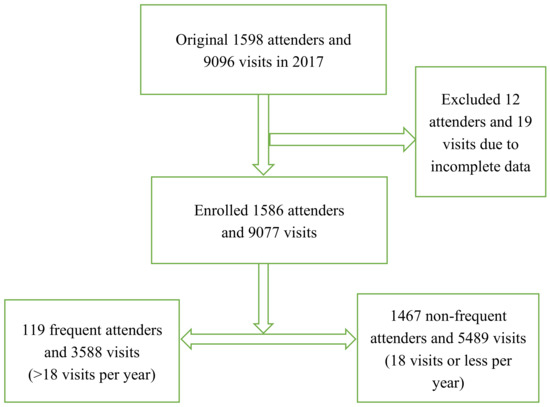