The Experience of Using Video Support in Ambulance Care: An Interview Study with Physicians in the Role of Regional Medical Support
Previous Article in Journal

Impact of Self-Reported Sitting Time and Transtheoretical Model Based on Exercise Behavior Change on Glycemic and Weight Control in Japanese Adults with Type 1 Diabetes: A Cross-Sectional Study

:
This cross-sectional study aimed to examine the associations among self-reported sitting time (ST), transtheoretical model (TTM) based on exercise behavior change, and glycemic and weight control in Japanese adults with type 1 diabetes (T1D). Forty-two adults (age, 44.0 (33.3–56.8) years) with uncomplicated T1D answered questions regarding their lifestyles, including ST per day, and TTM using self-administered questionnaires. The glycated hemoglobin (HbA1c) level correlated with age and ST (p < 0.05, p < 0.01, respectively), whereas body mass index correlated with duration of T1D and TTM (p < 0.05, p < 0.01, respectively). Logistic regression analysis showed that poor glycemic control (HbA1c, >7%) was associated with ST (odds ratio, 3.53 (95% confidence interval, 1.54–8.11), p < 0.01). In addition, the cut-off points for quartiles of ST were 4.6, 6.0, and 8.0 h/day, and the HbA1c level in the lowest quartile was 15% lower than that in the highest quartile (p < 0.01). Although further studies with larger samples are needed, these results implied that expanded self-reported ST might be related to poor glycemic control in Japanese T1D adults, most of whom were lean, young and middle-aged, regardless of TTM based on exercise behavior change.
Keywords:
sitting time; transtheoretical model; self-administered questionnaire; glycemic control; weight control; type 1 diabetes

Sedentary behavior, which is mostly the same as sitting time (ST) or reclining, is a primary indication for the decrease of physical activity (PA) [1]. There are associations between sedentary behavior and increased risk for at least 35 chronic diseases and clinical conditions [2]. Furthermore, even if individuals perform exercise or moderate- to vigorous-intensity PA regularly, increased ST induces the incidences of cardiovascular diseases and mortality [3,4]. As for metabolic function, sedentary behavior causes the deterioration of glycemic control [5] and an increased risk of type 2 diabetes (T2D) [6]. Previous research showed that an increase in the amount of time spent in daily sedentary behavior caused poor glycemic control in T2D patients [7]. On the other hand, in individuals with type 1 diabetes (T1D), the association between sedentary behavior and health outcomes is unclear. Some studies investigated the association between these factors in children, adolescents, young adults, and adults of all ages with T1D, and they analyzed the presence [8,9,10] or absence [11,12] of any significant relationships. The American Diabetes Association guidelines state that the specific role of PA in the management of blood glucose (BG) and the prevention of diabetes complications for people with T1D is not as clear as it is for those with T2D [13].
Furthermore, there is no known study on the relationship between sedentary behavior and glycemic control in Japanese adults with T1D. The prevalence of T1D in Japan is lower than that in Western countries [14,15,16]. Management of T1D is developing at a fast pace through various devices, medication, and nutrition therapy, and Japanese individuals with T1D receive various treatments in accordance with their dietary habits, culture, residential environment, and physical status, which differ from those of other countries. Thus, it is uncertain whether results from Western patients [8,9,10,11,12] can be applied to Japanese individuals with T1D.
To assess and promote PA, the transtheoretical model (TTM), which is the belief in one’s ability to achieve certain goals [17], has been extensively used [18,19]. The constructs of this model include stages of change, change processes, decisional balance, and self-efficacy. TTM based on exercise behavior change is an important factor for diabetic patients performing exercise. In individuals with T2D, the progression across the TTM stages is associated with better health outcomes such as glycemic control [20,21]. However, little is known about how TTM contributes to the management of health outcomes in individuals with T1D.
Therefore, we conducted this study to examine the association among ST, TTM based on exercise behavior change, and glycemic and weight control in Japanese adults with T1D.

This was a cross-sectional study. All participants provided written informed consent. The protocol for this study was approved by the institutional review board of Toyooka Hospital Hidaka Medical Center (Toyooka, Japan; approval number: 13, 2014) in accordance with the Declaration of Helsinki.

A total of 57 Japanese adults with T1D whose fasting serum C-peptide levels were <0.2 nmol/L and who regularly visited Toyooka Hospital Hidaka Medical Center (Toyooka, Japan) and Kobe University Hospital (Kobe, Japan) from 2015 to 2017 volunteered for this study. They usually visited the hospital once every 1–2 months as outpatients. T1D patients who were >20 years of age (no upper age limit) and were diagnosed over a year ago were included in the study. Patients with macrovascular or microvascular complications, motor dysfunctions, cognitive impairment, or other diseases affecting PA were excluded. All participants were being treated with insulin therapy, that is, multiple daily insulin injections or continuous subcutaneous insulin infusion (CSII), but no oral hypoglycemic agents. They also received medical nutrition therapy (based on carbohydrate counting) and self-management education for T1D, but no regular exercise therapy; it did not matter whether they performed exercise by themselves. They had no change in these treatments for at least 3 months.

All variables, including glycated hemoglobin (HbA1c) determined using a high-performance liquid chromatographic method and body mass index (BMI), were measured when the participants visited the hospital as regular outpatients. On the same day, they were asked to answer questions regarding their lifestyles, including ST per day, use of CSII, habits of cigarette smoking (≥1 time/day) and alcohol drinking (≥1 day/week, alcohol ≥ 20 g/day), use of car, whether employed, living with family, and TTM based on exercise behavior change using the self-administered questionnaires.
The assessment of ST was based on a question from the International Physical Activity Questionnaire (IPAQ) [1], which is the most widely used PA questionnaire [22], and the validity of the Japanese version IPAQ was proved [23]; “During the last 7 days, how much time did you spend sitting on a weekday?” [1]. ST included time spent sitting or lying down, such as watching television, playing video games, computer usage, reading, deskwork, and sitting on a train or in a car.
The stages of exercise behavior change using the TTM were classified into five stages: precontemplation (not intending to take action in the foreseeable future, usually considered as the next six months), contemplation (intending to change in the next six months), preparation (intending to take action in the immediate future, usually considered as the next month), action (making specific overt modifications in lifestyles within the past six months), and maintenance (making specific overt modifications in lifestyles and working to prevent relapse) [17,24]. The TTM method in this study consisted of one question on the five stages mentioned above, the reliability and validity of which were proved for applicability in the Japanese population [25,26]. The participants answered using a dichotomous scale (yes/no). For example, they chose “I currently do not exercise, but I intend to start exercising in the next 6 months” if they were in the contemplation stage [25].

All values are reported as the median (quartiles 25–75). All parameters were initially analyzed for the Shapiro–Wilk normality test to confirm a normal distribution. Correlations among HbA1c, BMI, and other variables were analyzed using Spearman’s rank correlation coefficient. Comparisons of variables in the groups categorized according to HbA1c (≤7% or >7% (poor glycemic control [27,28])) were analyzed using the Mann–Whitney U-test for continuous variables and Fisher’s exact test for nominal variables. Post hoc effect size and power analyses were performed for each variable, given the sample size. Binomial logistic regression analysis was performed to determine the predictors of poor HbA1c control, retraining variables with p-values < 0.1 in the above analyses as the explanatory variables. For a visual representation, quartiles of ST were calculated, and the Kruskal–Wallis test followed by the Steel–Dwass test were used to analyze differences in the HbA1c levels between the quartiles of ST. The results were analyzed using the IBM SPSS statistics (version 20.0, IBM, Tokyo, Japan). Statistical significance was set at p < 0.05.

In summary, we found that self-reported ST was related to glycemic control, and TTM based on exercise behavior change was related to weight control in Japanese adults with T1D, most of whom were lean, young, and middle-aged. Furthermore, the association between ST and HbA1c was observed even during progression across the TTM stages. Although further studies with larger samples are needed, we propose that the assessment of ST is important for the management of T1D.

This research was funded by Grants for medical staffs from Japan Association for Diabetes Education and Care (2017).

We thank the study participants for their time and effort. 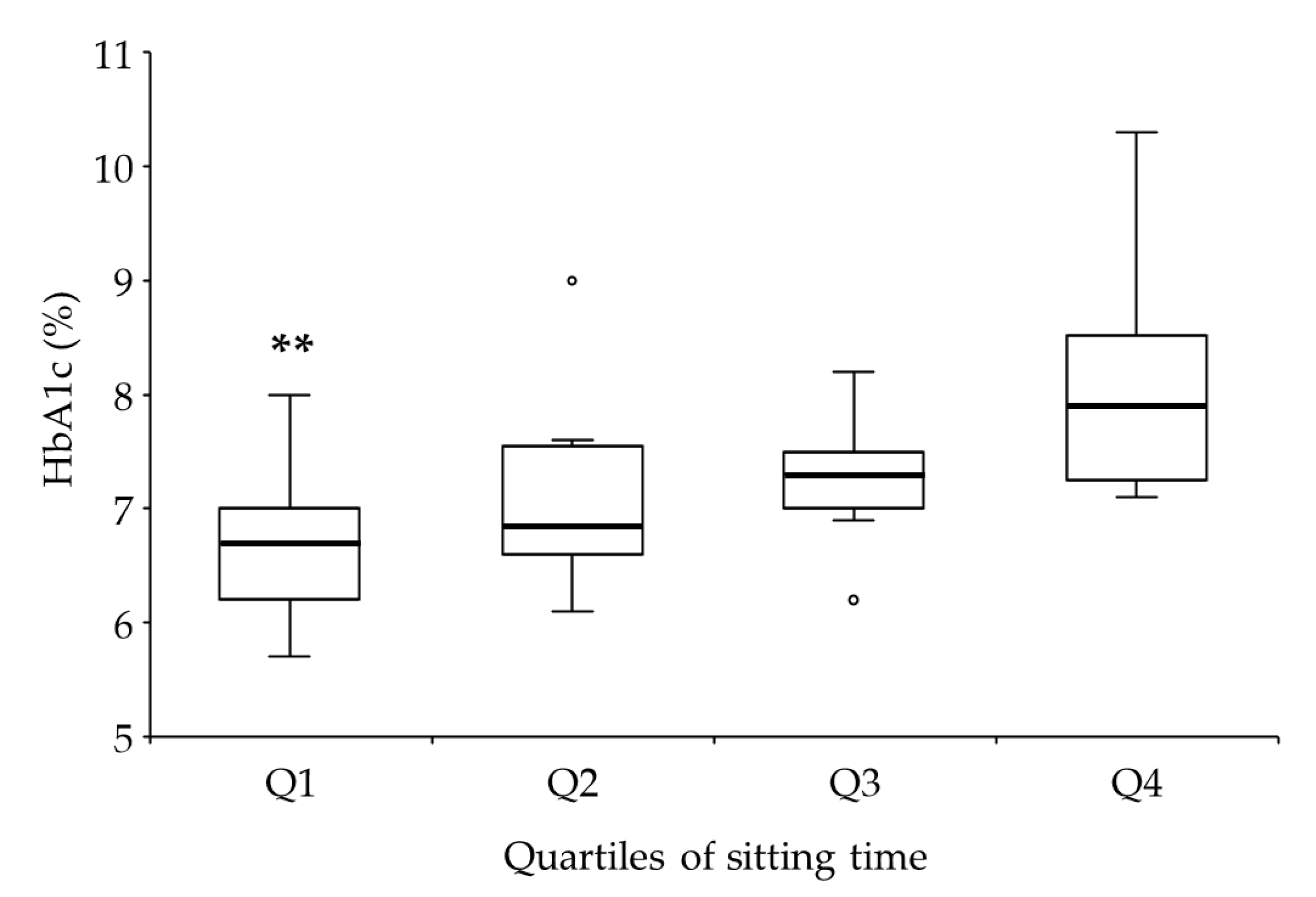