How to Relax in Stressful Situations: A Smart Stress Reduction System

Does the “Morning Morality Effect” Apply to Prehospital Anaesthesiologists? An Investigation into Diurnal Changes in Ethical Behaviour

The “morning morality effect”—the alleged phenomenon that people are more likely to act in unethical ways in the afternoon when they are tired and have less self-control than in the morning—may well be expected to influence prehospital anaesthesiologist manning mobile emergency care units (MECUs). The working conditions of these units routinely entail fatigue, hunger, sleep deprivation and other physical or emotional conditions that might make prehospital units predisposed to exhibit the “morning morality effect”. We investigated whether this is in fact the case by looking at the distribution of patient transports to hospital with and without physician escort late at night at the end of the shift as a surrogate marker for changing thresholds in ethical behaviour. All missions over a period of 11 years in the MECU in Odense were reviewed. Physician-escorted transports to hospital were compared with non-physician-escorted transports during daytime, evening, and night-time (which correlates with time on the 24 h shifts). In total, 26,883 patients were transported to hospital following treatment by the MECU. Of these, 27.4% (26.9%–27.9%) were escorted to the hospital. The ratio of patient transports to hospital with and without physician escort during the three periods of the day did not differ (p = 1.00). We found no evidence of changes in admission patterns over the day. Thus, no evidence of the expected “morning morality effect” could be found in a prehospital physician-manned emergency care unit. View Full-Text
Keywords: morning morality; ethical correct behaviour; admission pattern morning morality; ethical correct behaviour; admission pattern
►▼ Show Figures 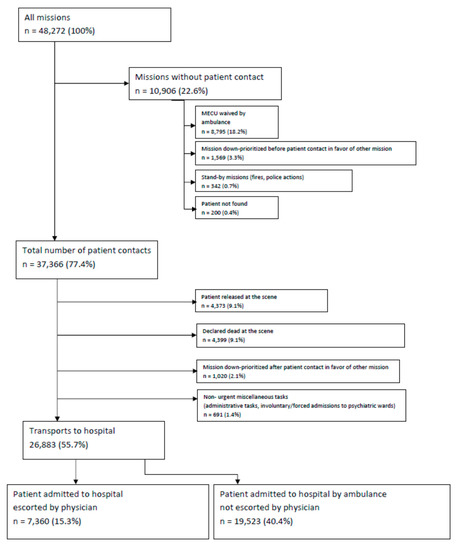