UK Dietary Policy for the Prevention of Cardiovascular Disease

Cardiovascular disease (CVD) affects around seven million people in the UK and is a significant cause of disability and death [1], responsible for 27% of all deaths (126,682) in England in 2014 [2]. A significant proportion of these deaths are premature: 25% in men and 17% in women under the age of 75. CVD accounts for more than 15% of total disability adjusted life years in England [3].
Overweight and obesity along with a poor diet, smoking, being physically inactive, and drinking too much alcohol are all risk factors for CVD; and such lifestyle factors are likely to be more ubiquitous in lower socioeconomic groups in the UK [4]. Mortality rates from CVD in people under 75 years are 105 per 100,000 in the most deprived decile compared with 59 per 100,000 in the least deprived decile in 2012–2014 [5].
This paper highlights current UK recommendations for the prevention of CVD and action to improve population diet and thus population health.

In the UK, healthy eating advice is translated into a food model visual to help the public understand and follow a diet consistent with health. In 1994 this was depicted as the Balance of Good Health [24,25,26] based upon a model average diet developed as part of the COMA Nutritional Aspects of Cardiovascular Disease report [8] using household food purchasing data from the 1992 National Food Survey. This was updated in 2006 to the eatwell plate [27] when health professionals began to express an interest in seeing an updated, more appealing visual. Consumer research was conducted to understand attitudinal and behavioural responses to differing visual representations of healthy eating and the context in which people viewed these. Since government dietary advice had not changed since the development of the Balance of Good Health, the proportions associated with different food category groups was not reviewed.
Given the likely changes to sugar and fibre recommendations that were emerging in 2015 when SACN published its draft report on Carbohydrates and Health, PHE committed to reviewing healthy eating messages—including the eatwell plate. PHE convened an external reference group to advise on methodology for this review [28]. Given the potential changes in dietary recommendations several approaches to updating the model were considered. Linear programming was identified as the most robust and objective approach. This modeling approach uses a mathematical function that measures the divergence of the modelled scenario from the diet currently consumed; resulting in a scenario that has the fewest number of changes to achieve dietary recommendation and is described elsewhere [29,30]. Modelling utilised the most recent NDNS data at the time of the modelling [18] and most recent data on food composition [31] with macronutrient and food recommendations for adults as the outcome variables (Table 2).
Alongside this modelling, qualitative work took place across the UK involving 152 individual in-depth interviews with individuals (60 from higher (BC1) socioeconomic groups, 92 from lower (C2DE) socioeconomic groups) in phase 1 and 80 individual depth interviews (20 BC1, 61 C2DE) in phase 2. Interviewees included Caucasian, Afro-Caribbean, African, Chinese, South Asian and mixed race individuals. This research assessed the public understanding of the eatwell plate and approaches to improving understanding, meaning and opportunities to improve the communication of healthy eating messaging. Research was undertaken in two phases with the second phase building on the learning form the first phase and utilisng early outcomes from linear programming to change the balance of food groups within the visual [29].
Overall, the eatwell plate model of a circular visual was well recognised and understood by the public. While participants recognised they did not meet the recommendations in the visual they were able to interpret their own diet relative to this and identify how they could improve their diet to meet healthy eating recommendations. The use of drawn images rather than photographs (as previously used in the eatwell plate) was preferred for recognition, clarity and educational potential while photographs of food was seen as being too aspirational. Based on feedback from phase 1 research changes to the names of food group categories were positively received as were the additional messages provided outside individual food group segments.
The greatest difference in the visual image related to the separation of ‘foods to be consumed less often and in small amounts’ from a small segment allocated to ‘oils and fats’. The separation of these foods and movement outside the main image were considered to convey better understanding of the role of these foods in the diet. Participants welcomed the inclusion of hydration messages and the advice to reduce sugary drinks within this. The inclusion of adult energy intake recommendations as part of the border of the image was seen to be useful approach of communicating benchmark energy intakes.
Following the finalisation of modelling and the consumer research, PHE revised and launched the Eatwell Guide in March 2016 (Figure 1).
Helping the UK population achieve dietary recommendations is not going to be realised through a revised food model alone. Action arising by government working with industry in the UK to reduce salt in manufactured products alongside a government salt awareness campaign has been associated with an 11% reduction in salt intake since 2009 [15]. Similar activity related to sugar, saturated fat and portion size would support reductions in energy intake that would be anticipated to impact on weight and associated ill health, including that for CVD.
Sugar reduction evidence into action [32] considered a range of evidence to assess approaches to reducing sugar intake in the UK. This mixed method research concluded that no single approach would be sufficient to reduce obesity in the UK, however, a multifaceted approach taking a whole system approach had the potential for impact. Action, which if enacted together would likely reduce UK, sugar intakes included reducing and rebalancing price promotions in all retail outlets, reducing marketing and advertising of high sugar food and drink across all media, setting a clear definition for high sugar foods, Introducing a broad sugar reduction programme in everyday food and drink, introducing a minimum 10%–20% tax or levy on high sugar products e.g. sugary soft drinks, adopting the government buying standards for food and catering services more widely across the public and private sectors, ensuring delivery of accredited training in diet and health to the catering, fitness and leisure industry workforce and raising awareness of sugar intakes to the public, workforce, employers and food industry.
The UK Government’s Childhood Obesity Plan was published in August 2016 [33] and included some of the areas of work highlighted in Sugar reduction evidence into action. While chiefly addressing obesity, the potential impact on weight, together with other actions on CVD risk factors are likely to improve CVD outcomes in the UK. Activity alongside that related to diet and obesity addressing adult CVD include work on alcohol, tobacco, physical activity and pollution [34].

Government advice in the UK is based upon review of the evidence base. Dietary advice in relation to cardiovascular disease takes account of energy, saturated fat, sugar, salt, fruits, vegetables, fibre and oily fish. The UK’s Scientific Advisory Committee on Nutrition publishes evidence reviews in these, and other areas; most recently their report on Carbohydrate and Health. Based on this advice the UK updated its national plate model represented as the Eatwell Guide. Moving the population to a diet consistent with the Eatwell Guide will help people meet UK dietary recommendations and improve health, including cardiovascular health resulting in longer and healthier lives.

The authors are employees of Public Health England and no additional funding was provided in the development of this manuscript.

Louis Levy and Alison Tedstone contributed to drafting of the paper. 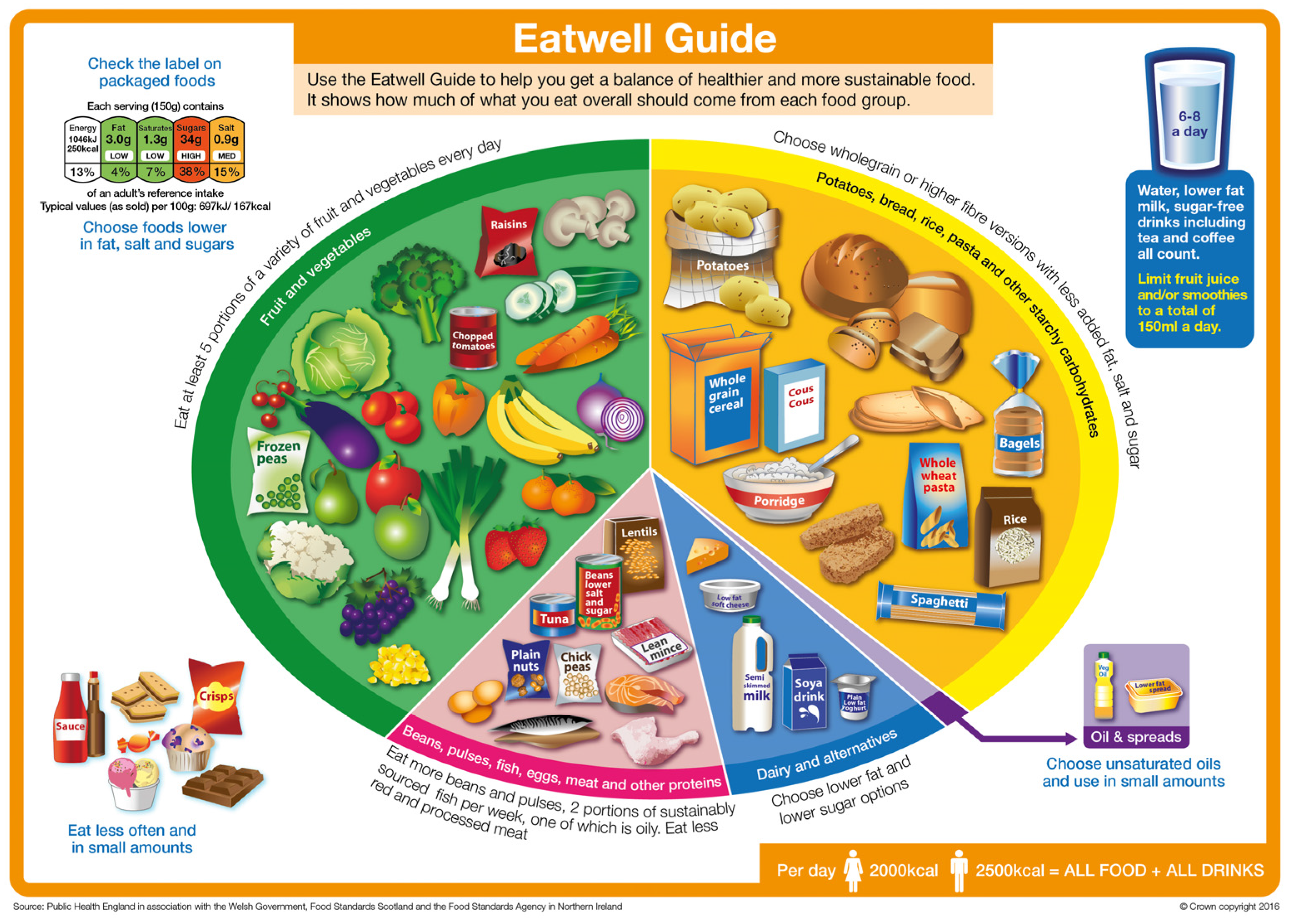