Self-Reported Ache, Pain, or Numbness in Feet and Use of Computers amongst Working-Age Finns
Previous Article in Journal

Objective: The main purpose of this study was to investigate the mental health of Cypriot citizens living in the current difficult period of economic recession. The specific objective was to investigate the different factors (gender, age, socio-economic factors, etc.) that may affect the levels of emotional distress, anxiety, and depression in patients attending the Rural Health Centre of Kofinou. Materials and Methods: The sample consisted of a total of 300 Cypriots who visited Kofinou Health Centre in the period between July and September 2015. For the middle-aged citizens, the Greek version of the Hospital Anxiety Depression Scale (HADS) was applied to 150 persons [], while for the visiting senior citizens (aged over 65 years), the Greek version of the Geriatric Depression Scale (GDS) was used []. Results: HADS: A total of 150 people of average age 47 ± 11.5 years (min 23–max 64) participated in the study. Fifty-six percent were women. Seventy-seven percent stated they had a reduction in income (mean reduction 35% ± 25%) and 46.7% suffered from chronic disease. The 36.6% and 28.7% of the visitors showed moderate or severe forms of anxiety and depression, accordingly. Higher emotional distress is associated with lower educational level (b = −2.63, p < 0.001), lower income (b = −1.07, p = 0.017), and the presence of a chronic disease (b = 5.45, p < 0.001). The same factors are significantly associated with higher anxiety (Education: b = −1.20, p = 0.003; Income: b = −0.64, p = 0.01; Chronic disease: b = 2.82, p = 0.001). Additionally, a reduction in income (>35%) is associated with increased depression (p = 0.028). GDS: 150 patients out of which 77 were women (51.3%). The average age of participants was 72 ± 5.5 years. Ninety-three (62%) participants declared a reduction in income due to the financial crisis (mean reduction 20% ± 8%), while 139 (92.7%) stated that they had chronic disease. Fifty-three participants (35.3%) thought they had symptoms of depression after the economic crisis. The women showed higher level of geriatric depression symptoms than men (b = −1.96, p = 0.005), while age is associated with higher levels of GDS (b = 0.16, p = 0.006). Conclusions: The study shows that stress levels, depression, and emotional distress are increased in specific population groups. The main variables associated with the mental health of the participants are the presence of a chronic disease, income, and level of education. View Full-Text
Keywords: depression; anxiety; emotional distress; HADS; GDS; Health Centre depression; anxiety; emotional distress; HADS; GDS; Health Centre
►▼ Show Figures 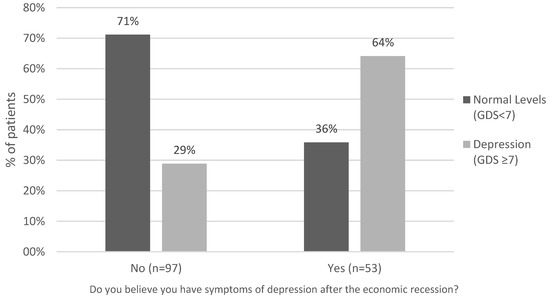