Among vertebrates, true parthenogenesis is known only in reptiles. Parthenogenetic lizards of the genus Darevskia emerged as a result of the hybridization of bisexual parental species. However, uncertainty remains about the mechanisms of the co-existence of these forms. The geographical parthenogenesis hypothesis suggests that unisexual forms can co-exist with their parental species in the “marginal” habitats. Our goal is to investigate the influence of environmental factors on the formation of ecological niches and the distribution of lizards. For this reason, we created models of species distribution and ecological niches to predict the potential geographical distribution of the parthenogenetic and its parental species. We also estimated the realized niches breadth, their overlap, similarities, and shifts in the entire space of predictor variables. We found that the centroids of the niches of the three studied lizards were located in the mountain forests. The “maternal” species D. mixta prefers forest habitats located at high elevations, “paternal” species D. portschinskii commonly occurs in arid and shrub habitats of the lower belt of mountain forests, and D. dahli occupies substantially an intermediate or “marginal” position along environmental gradients relative to that of its parental species. Our results evidence that geographical parthenogenesis partially explains the co-existence of the lizards. View Full-Text
Keywords: Reptilia; Lacertidae; Squamata; reticulate evolution; caucasian rock lizards; parthenogenetic; ecological niches; spaces distribution models Reptilia; Lacertidae; Squamata; reticulate evolution; caucasian rock lizards; parthenogenetic; ecological niches; spaces distribution models
►▼ Show Figures 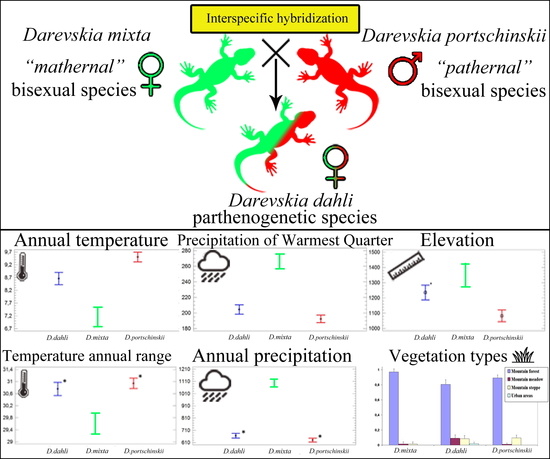