We provide a comprehensive presentation of algorithms, data structures, and implementation techniques for high-performance sparse multivariate polynomial arithmetic over the integers and rational numbers as implemented in the freely available Basic Polynomial Algebra Subprograms (BPAS) library. We report on an algorithm for sparse pseudo-division, based on the algorithms for division with remainder, multiplication, and addition, which are also examined herein. The pseudo-division and division with remainder operations are extended to multi-divisor pseudo-division and normal form algorithms, respectively, where the divisor set is assumed to form a triangular set. Our operations make use of two data structures for sparse distributed polynomials and sparse recursively viewed polynomials, with a keen focus on locality and memory usage for optimized performance on modern memory hierarchies. Experimentation shows that these new implementations compare favorably against competing implementations, performing between a factor of 3 better (for multiplication over the integers) to more than 4 orders of magnitude better (for pseudo-division with respect to a triangular set). View Full-Text
Keywords: sparse polynomials; polynomial arithmetic; normal form; pseudo-division; pseudo-remainder; sparse data structures sparse polynomials; polynomial arithmetic; normal form; pseudo-division; pseudo-remainder; sparse data structures
►▼ Show Figures 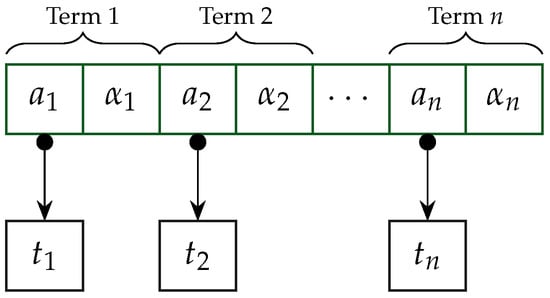