On the Dimension of Algebraic-Geometric Trace Codes

Cancer pertains to a class of diseases characterized by out-of-control cell growth. Unsatisfactory performance of immune system against cancerous abnormal cells and consequently their chaotic growth leads to serious health damages and even death. So this chaotic nature of cancer needs to be controlled. The chaotic dynamics of cancer growth have been extensively studied in the literature to understand the mechanism of the disease and to predict its future behavior. Interactions of cancer cells with healthy host cells and immune system cells are the main components of these models and these interactions may yield different outcomes. Some important phenomena of cancer progression such as cancer dormancy, creeping through, and escape from immune surveillance have been investigated [1]. De Pillis and Radunskaya [2] included a normal tissue cell population in this model, performed phase space analysis, and investigated the effect of chemotherapy treatment by using optimal control theory whereas Kirschner and Panetta [3] examined the cancer cell growth in the presence of the effector immune cells and the cytokine IL-2 which has an essential role in the activation and stimulation of the immune system. They implied that antigenicity of the cancer cells plays an essential role in the recognition of cancer cells by the immune system. They observed oscillations in the cancer cell populations which is also demonstrated in the Kuznetsov’s model and in addition, they obtained a stable limit cycle for some parameter range of the antigenicity. One can find many other models of the cancer-immune interactions with their dynamical analysis as well as investigations of optimal therapy effects. Although all these models include different cell populations, they share basic common characteristics such as existence of cancer free equilibria which is the main attention of investigating the therapy effects, coexisting equilibria where cancer and other cells are present in the body and in competition, and finally cancer escape and uncontrolled growth [4]. It has been observed that most of the interesting dynamics occur around coexisting equilibria which may yield oscillations in the cell populations, and converge to a stable limit cycle, as we mentioned before.
During the last decade, a lot of work based on different approaches has been done to control the chaos through the mathematical model representing cancer dynamics. Gohary and Alwasel [5] have studied the chaos and optimal control of cancer model with completely unknown parameters together with the asymptotic stability analysis of biologically feasible steady-states whereas Gohary [6] studied the problem of optimal control of cancer self-remission and cancer unstable steady-states together with the stability analysis of biologically feasible equilibrium states using a local stability approach. Baghernia et al. [7] considered the nonlinear prey-predator model to show the natural interaction between cancer and immune cells. Furthermore, a controlling strategy is proposed based on sliding mode control to convert the unstable states to the desired chaotic status.
Motivated by the aforementioned studies, the author aims to control the chaotic dynamics of TDCM using SSEL technique based on Lie algebra. The main advantages of this approach are that it is not only robust but also in this approach the control is injected only on healthy host cells (i.e., ) and effect of control can be seen on the rest of state variables (i.e., ).
Rest of the study has been organized as follows: In Section 2, a brief about the methodology has been described whereas Section 3 is on problem formulation. Section 4, contains the implementations of the technique on the considered system (TDCM). Section 5, is based on numerical simulations and lastly the whole study has been concluded in Section 6.

It is a technique of controlling a chaotic system that involves transformation of a given non-linear system into a linear system by injecting a suitable control input [8]. Let us consider a non-linear dynamical system as:
After injecting control term it can be written as: where , is the state vector; and , is the control parameter, and are both smooth vector fields on and Equation (2) is called feedback linearizable in the domain if there exists a smooth reversible change of coordinates , and a smooth transformation feedback , , where is the new control if the closed loop system is linear [9].
For two vector fields, and , the different order Lie brackets are denoted by the symbols as follows:
for with , and each of for . If we write ; then is computed by the formula:
In some neighborhood of a point , if the matrix, has a rank n and is involutive, then there exists a real valued function , such that:
, and where denotes the Lie derivative of the real valued function with respect to the vector field F. If that happens there exists transformation in , given by: and that transforms the non-liner system into the linear controllable system [10,11,12,13,14]:

4. Control of the Chaotic System

In order to apply the control technique, the above system of Equation (6) can be written as where, , and,
Parametric entrainment control is applied to the parameter in the second equation of the Equation (6) and one gets, where and .
Using Equations (6) and (7), and using Lie bracket,
Lemma 1.
For any , there exists an open set containing where the matrix has rank 3 and is involutive.
Proof.
Let
, for non-zero values of state variables involved in . It is also confirmed by Figure 1.
Therefore or equal to the order of the system. With the help of Equations (7) and (8) one can show that: which shows that belongs to . Hence, S is involutive.
Lemma 2.
For any thrice differentiable function , there exists, a smooth transformation with a smooth inverse, defined on an open set where that reduces Equation (6) to a linear controllable form.
Proof.
Since Lemma 1 holds, there exists a real valued function such that and but, . Now, implies and implies . Hence is independent of and but depends on . Thus, where simple calculations yield, as .
With the help Equation (11) one can easily calculate the following Lie derivatives given as where, , , .
With the help of Equation (12), the transformation Equation (3) takes the form
Inverse transformation can be calculated from Equation (13) as
Controller u is obtained from the Equation (3) as
These will change the TDCM given by Equation (6) into a linear controllable system: where is considered linear in , and . Without loss of generality, one may choose the linear form of as where, .
Theorem 1 [8].
(Stabilization at a point): The controller stabilizes the equilibrium point iff and .
Theorem 2 [8].
(Stabilization onto a limit cycle—Hopf bifurcation): The controller stabilizes the system on to a stable limit cycle if and .
Now, using Equations (12) and (15), the controller u can be written as:
Equation (6) with an output function becomes a controlled one when the control loop is closed with control input given by Equation (17).
Now the problem is studied for the particular forms of . However, there are many choices for (i.e., linear, quadratic, etc. in ). Here we choose only linear because the other forms will give more complicated forms of u after tedious calculations.
Let, a linear output will give control law: stabilizes Equation (6) to the control goal or where is the parameter that determines the control goal.
Let , where is arbitrary constant to be determined later. Controlling Equation (17) to the origin and changing the values of , one can control x to the control goal . In this case control law takes the form: for the transformations, from linear to nonlinear and vice versa, we have the following relations respectively,
Similarly, using reverse transformation, someone can find x in terms of z. Below the same has been written using Mathematica: where and .
Since the feedback control law stabilizes the equilibrium point of Equation (16), then using Equation (21) and changing the value of K, one can control to the goal and the variation of K is given by the formula:
As x3 goes to the goal xg, the state vector x goes to or .

The system parameters involved in Equation (6) have been chosen as: ; ; ; ; ; ; ; with the initial conditions: ; ; , and for ; ; ; , a controller given by Equation (19) is evaluated. Using Mathematica, the following different graphs have been plotted to show the robustness as well as effectiveness of the implemented technique. Figure 2 and Figure 3 depict the uncontrolled and controlled time series of the state variables of the system Equation (6), respectively whereas the phase plots (a graph between state vector & its derivative) of three state vectors are shown in Figure 4, Figure 5 and Figure 6 for controlled and uncontrolled one, respectively. Someone can observe that chaotic attractors are being replaced by regular ones as the controller is injected. Comparative parametric plots of controlled and uncontrolled state vectors pairwise and 3D have been sketched (Figure 7, Figure 8, Figure 9, Figure 10 and Figure 11).

In this paper, we have controlled the chaotic dynamics of TDCM using the SSEL method based on Lie algebra. Without the loss of generality, an equivalent linear system to the considered chaotic system has been obtained using Lie algebra. Also, a single control term has been injected to the chaotic system and the control has been observed in all three state vectors representing the number of cancer cells ; the healthy host cells ; and the effecter immune cells in a very short time. The robustness of the technique in controlling the chaotic behavior can be observed through the presented plots. 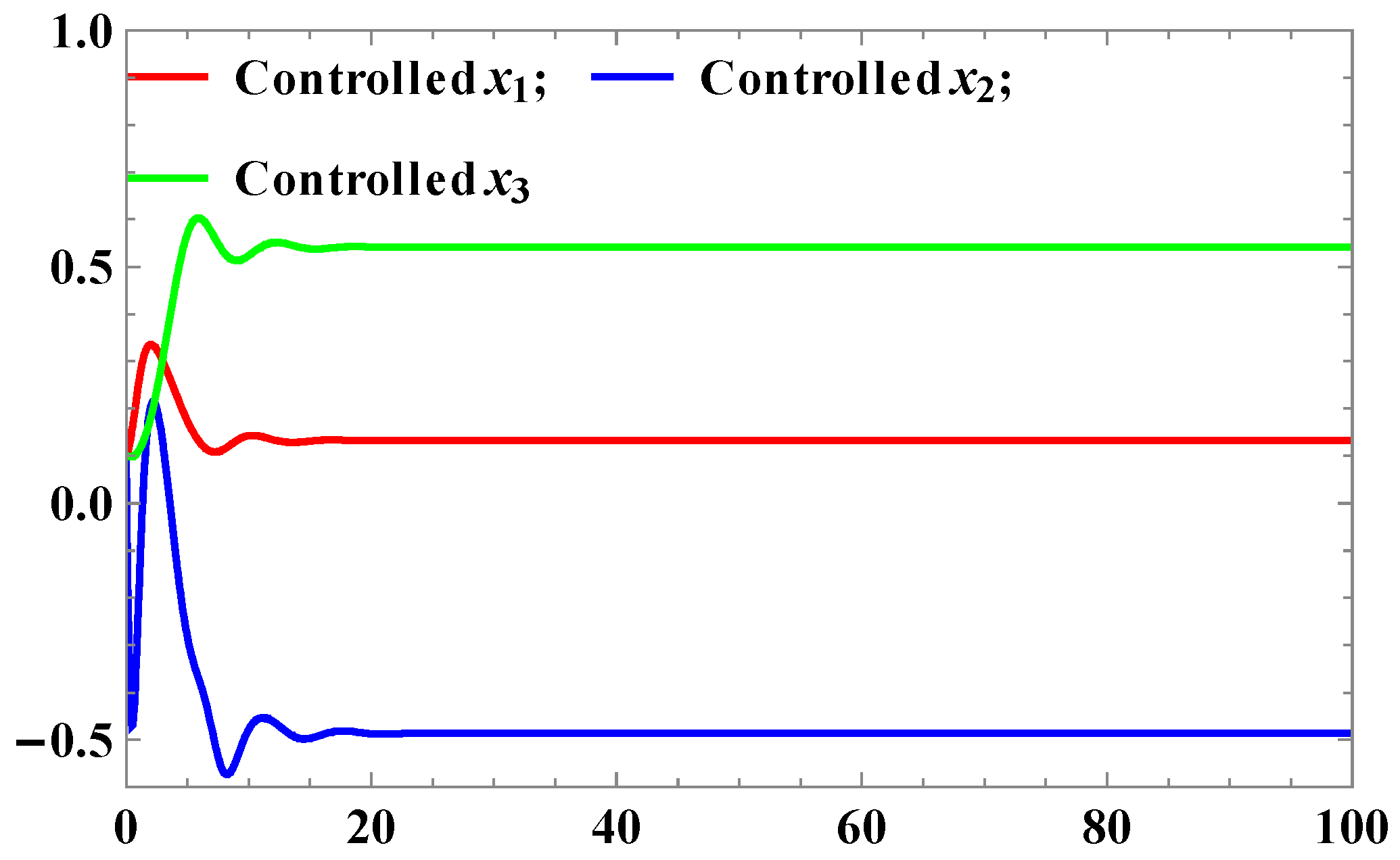 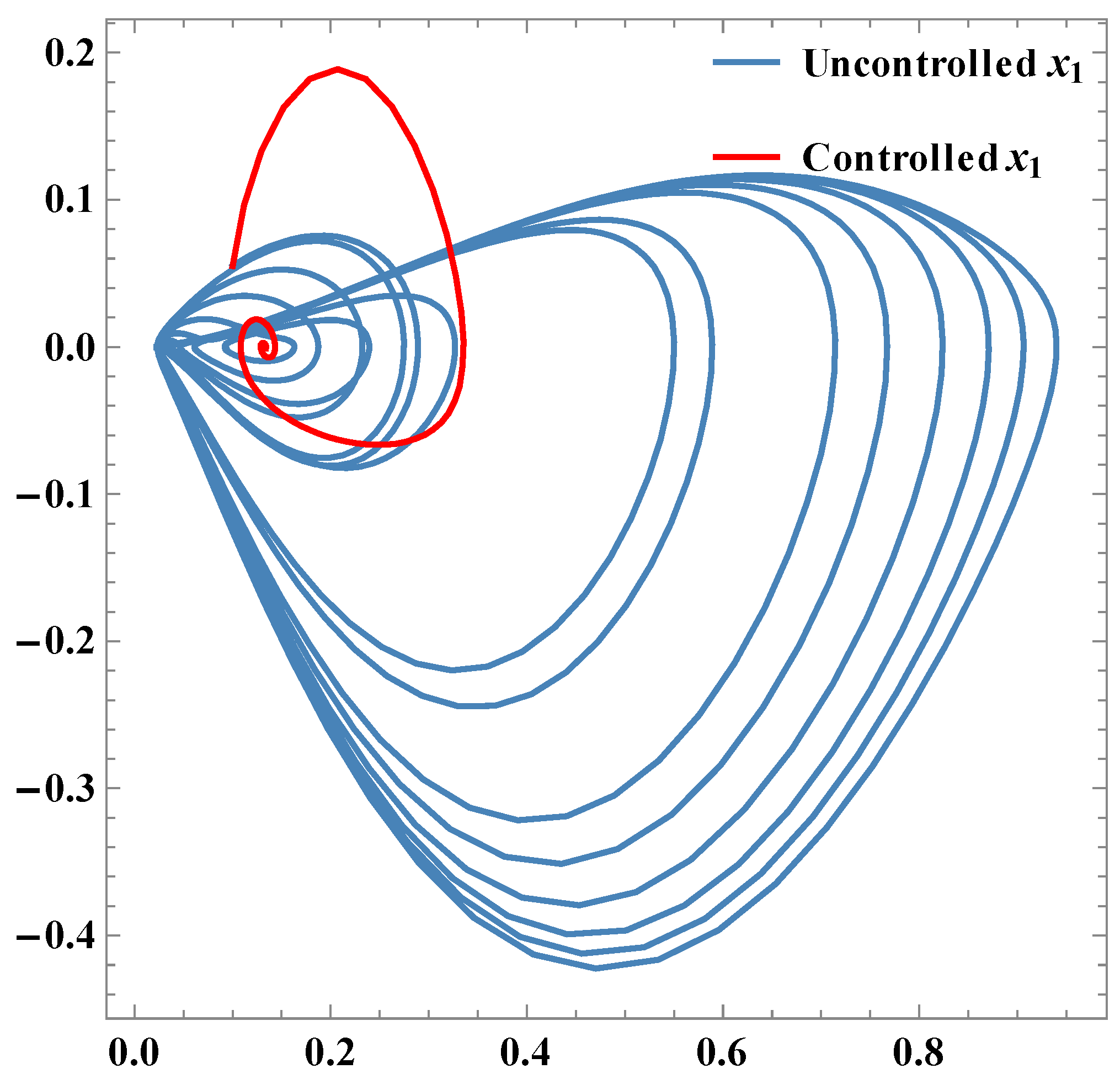 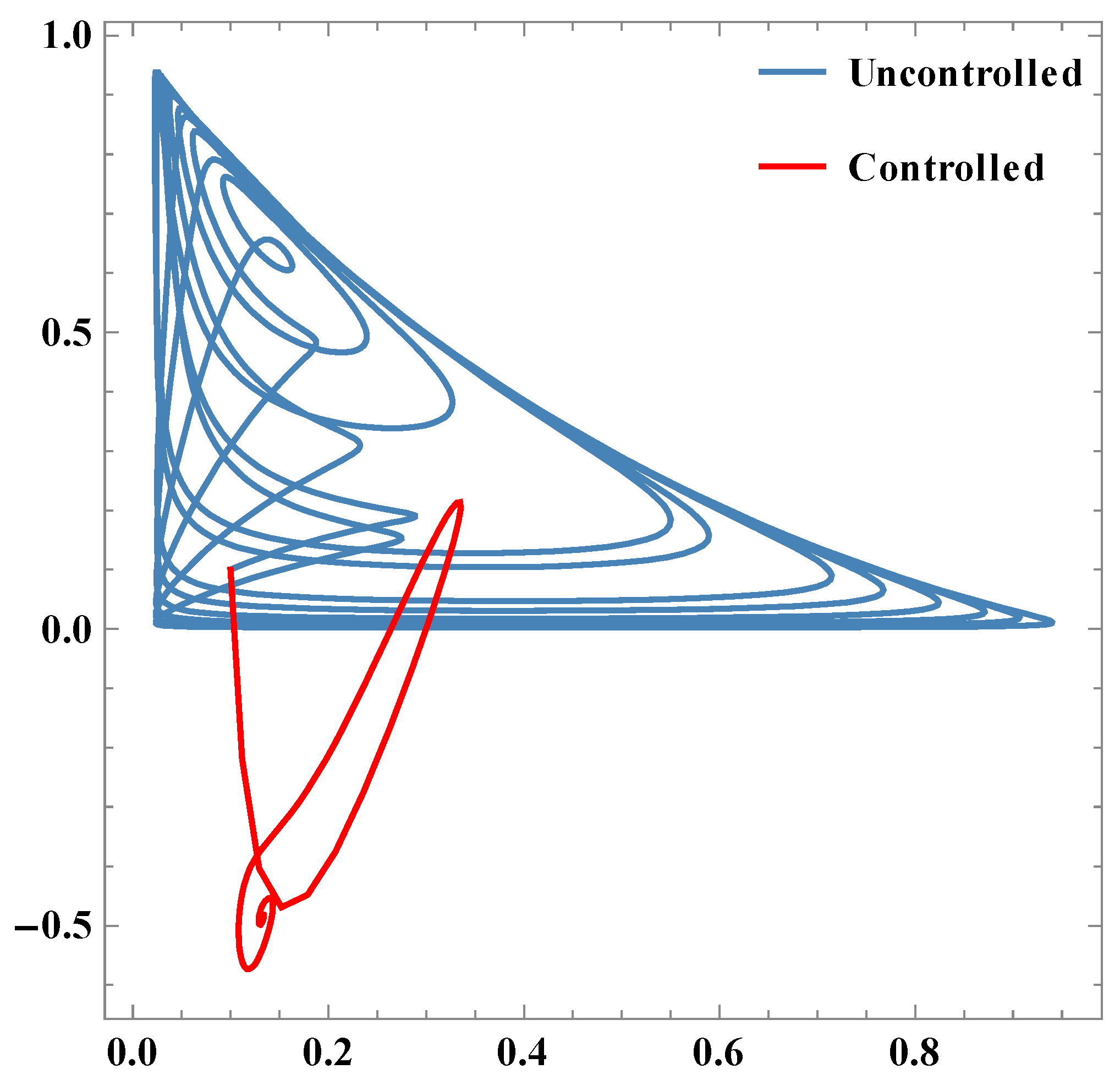 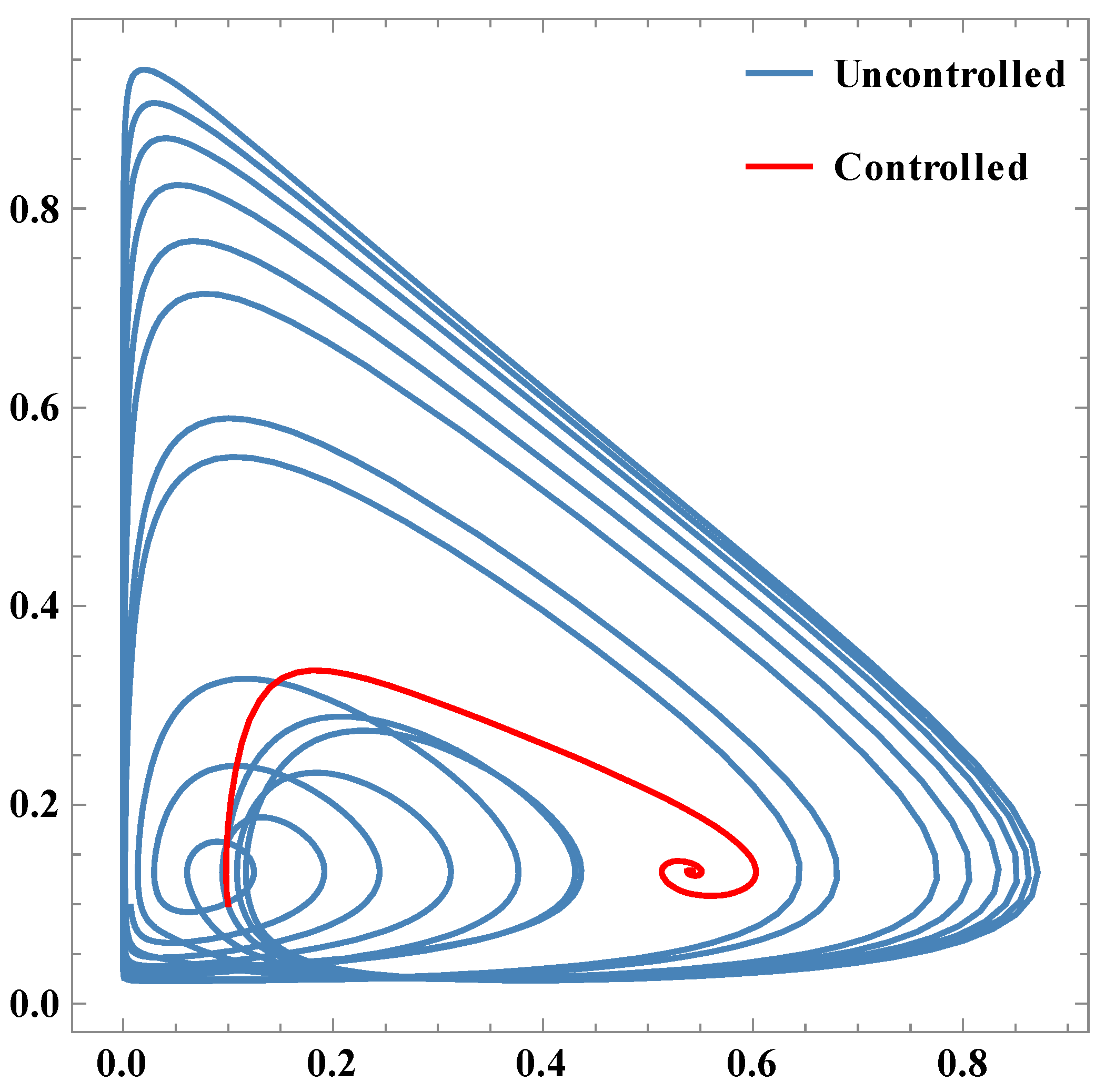 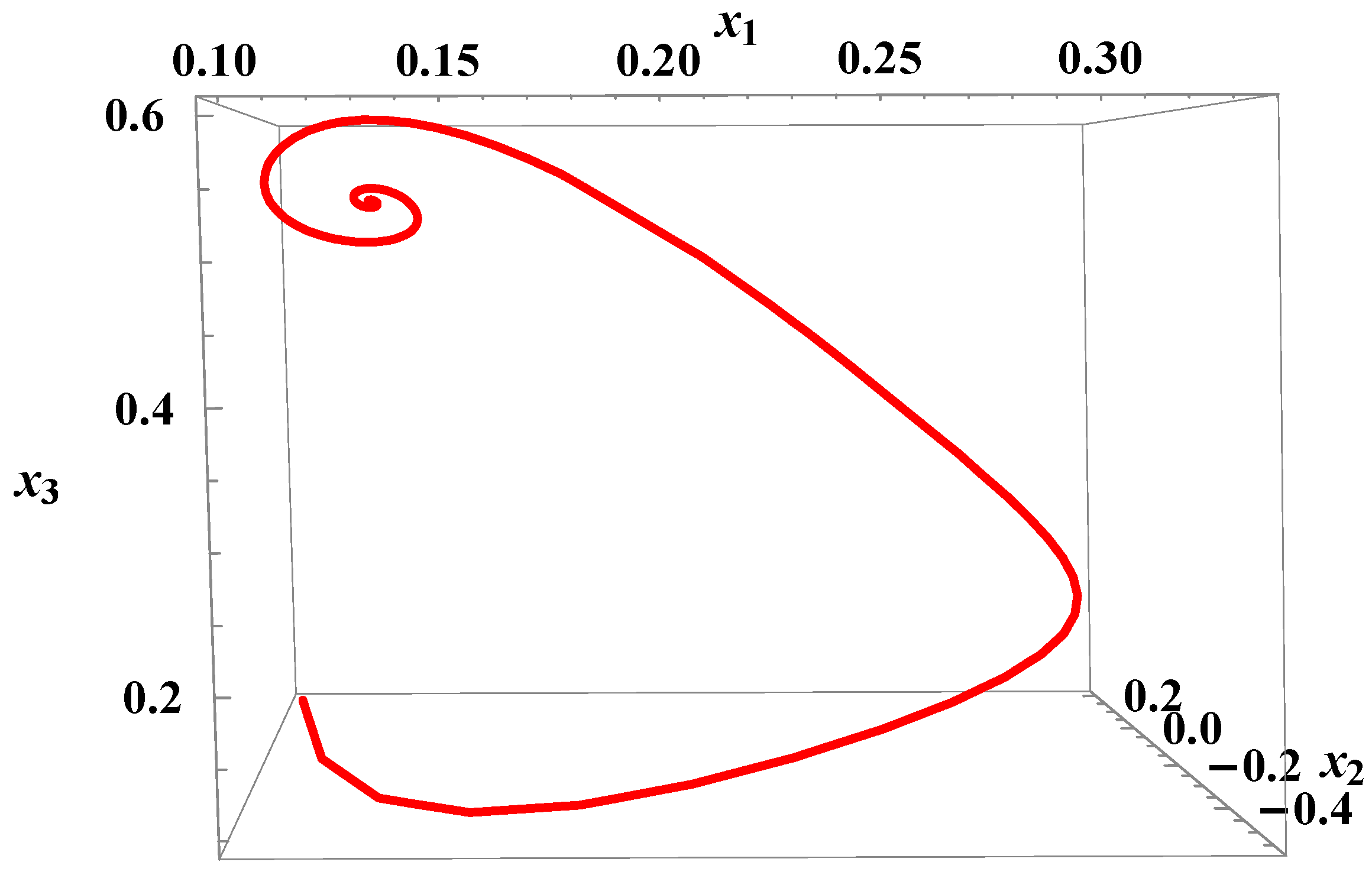