:
The purpose of this work was to conduct a numerical examination of mixed convective heat transfer in a three-dimensional triangular enclosure with a revolving circular cylinder in the cavity’s center. Numerical simulations of the hybrid Fe3O4/MWCNT-water nanofluid are performed using the finite element approach (FEM). The simulation is carried out for a range of parameter values, including the Darcy number (between 10−5 and 10−2), the Hartmann number (between 0 and 100), the angular speed of the rotation (between −500 and 1000), and the number of zigzags. The stream function, isotherms, and isentropic contours illustrate the impact of many parameters on motion, heat transfer, and entropy formation. The findings indicate that for enhancing the heat transfer rates of hybrid nanofluid in a three-dimensional triangular porous cavity fitted with a rotating cylinder and subjected to a magnetic field, Darcy number > 10−3, Hartmann number < 0, one zigzag on the hot surface, and rotation speed >500 in flow direction are recommended.
Keywords:
zigzag; nanoliquid; FEM; porous; MHD
MSC:
76D05; 80A05; 80M10

The convective flow described in this work is constant, three-dimensional, and laminar. Figure 1 depicts the computational domain, which comprises porous media saturated with hybrid nanofluid, as well as the boundary conditions connected with it. The bottom wall and the cylinder are insulated, whereas the vertical side wall and inclined wall are heated and cooled, respectively. To test for the impact of enclosure geometry, various patterns for the zigzag wall on the vertical sidewall are investigated. Magnetic field effects are also taken into account by providing a steady magnetic field along the positive Z-axis. Water as a base liquid is combined with Fe3O4 and MWCNT nanoparticles to form the working suspensions. Table 1 summarizes the thermophysical characteristics of both the base fluid and nanoparticles. The one–energy equation model is used, with the assumption that the mixture density is a linear function of the temperature. Taking these assumptions into account, the governing equations for the studied case are as follows:
The mass, momentum, and energy conservation equations, as well as the entropy generation equation, may be expressed in a three-dimensional Cartesian coordinate system as follows [44]:
The conservation equations (CEs) are expressed in the porous area.
The non-dimensional parameters are denoted by the following:
It is noted that the last term on the right-hand side of Equations (3) and (4) represents the Lorentz force as a function of Hartmann number. The Hartmann number is taken as constant in our study.
Table 1. Nanoparticles and base fluid thermos-physical properties [45].
Table 1. Nanoparticles and base fluid thermos-physical properties [45].
The governing equations’ boundary conditions are as follows:
Hypotenuse side walls:
Front and back walls:
Bottom wall:
Cylinder: with .
Entropy generation can be written in dimensionless form as follows:
The correlations listed in Table 2 were utilized to determine the hybrid nanoliquid thermophysical properties, such as fluid density, viscosity, heat capacity, thermal conductivity, electrical conductivity, and so on, which are important to calculate flow and heat characteristic that are presented in the conservation equations. These equations are typically used in the literature to determine the properties of the nanofluids and hybrid nanofluids.
The amount of entropy in a nanoliquid’s motion is predicted to change. Due to the fact that heat transfer is subject to specific variations, the total entropy may be characterized as follows:
and are estimated as:
While the entropy generation number is useful for creating entropy generation profiles or maps, it does not indicate whether fluid friction or heat transfer is dominant.
The Bejan number (Be), which is the ratio of heat transfer irreversibility to the total entropy generation, can be mathematically expressed as
The Bejan number is between 0 and 1.
Thus, Be = 1 is the limit at which irreversibility of heat transmission prevails, Be = 0 is the opposite limit at which fluid friction effects dominate irreversibility, and Be = 1/2 is the limit at which the rates of heat transfer and fluid friction entropy production are equal

Five distinct grids were employed to ensure that the findings were not grid-dependent. Nuavg and the Bejan number are used to establish the independence of heat transfer from the number of grids (see Table 3). Due to the variability of the findings, the fourth grid was chosen as the final grid in all situations, as seen in Figure 1. As a main criterion for reaching findings, Ghasemi et al.’s [46] past investigations were employed to validate our model, as seen in Figure 2.
It is critical to note that the governing equations and associated limitations are solved using the Galerkin finite element method. The Galerkin weighted residual finite element method solves the equations numerically. The programming environment is segregated in triangle pieces. Triangular Lagrange finite elements of different orders are employed on any of the flow variables inside the code domain. The residue is obtained by substituting the governing equations for the approximations.

A porous cavity filled with Fe3O4/MWCNT-water hybrid nanofluid and equipped with a moving cylinder is investigated for thermal-hydraulic enhancements. The cavity is a trapezoid with a zigzagged hot wall on the left, while the right wall is cold, and the others are well-insulated. Three-dimensional CFD-based simulation was conducted using the Galerkin finite element (GFEM) method with a triangle element shape to simulate the investigated cavity. The developed model was validated against reported experimental data in the literature.
The fluid flow and heat transfer characteristics in terms of streamlines, isotherms, and Bejan number values are massively visualized in 3-D surface plots, while the average Nusselt number and average Bejan number profiles are plotted against Darcy number (10−5, 10−4, 10−3, and 10−2), Hartmann number (0, 20, 50 and 100), rotating cylinder speed (−500, 0, 500, 1000), and the number of zigzags of the hot wall (1, 2, and 4). Based on the investigated parameters, the following conclusions are drawn:

-
Higher Darcy number values enhance the fluid flow, temperature distribution, and heat transfer and minimize heat transfer’s contribution to the total entropy generation.
-
The effect of the Hartmann number on the flow characteristic is not high for mixed heat transfer flow in a porous cavity having a zigzagged wall; however, values of >22 (Hartmann number) could be avoided.
-
Clockwise rotation of the embedded cylinder enhances the heat transfer and fluidity better than a counter-clockwise one. However, both directions lead to a better heat transfer mechanism than the stationary cylinder (natural convection).
-
For the investigated geometries, one zigzag on the hot wall is sufficient to enhance the heat transfer rates and reduce the entropy generation contribution from the heat losses.

To sum up, for enhancing the heat transfer rates in a porous cavity having an embedded rotating cylinder and subjected to a magnetic field, Darcy number of >10−3, Hartmann number <0, one zigzag on the hot surface, and cylinder rotation of >500 in flow direction are recommended.

The authors extend their appreciation to the Deanship of Scientific Research at King Khalid University for funding this work through the group research program under grant number R.G. P. 1/173/42. This work was supported by a Korea Institute of Energy Technology Evaluation and Planning (KETEP) grant funded by the Korea government (MOTIE) (No. 20192010107020, Development of hybrid adsorption chiller using unutilized heat source of low temperature). 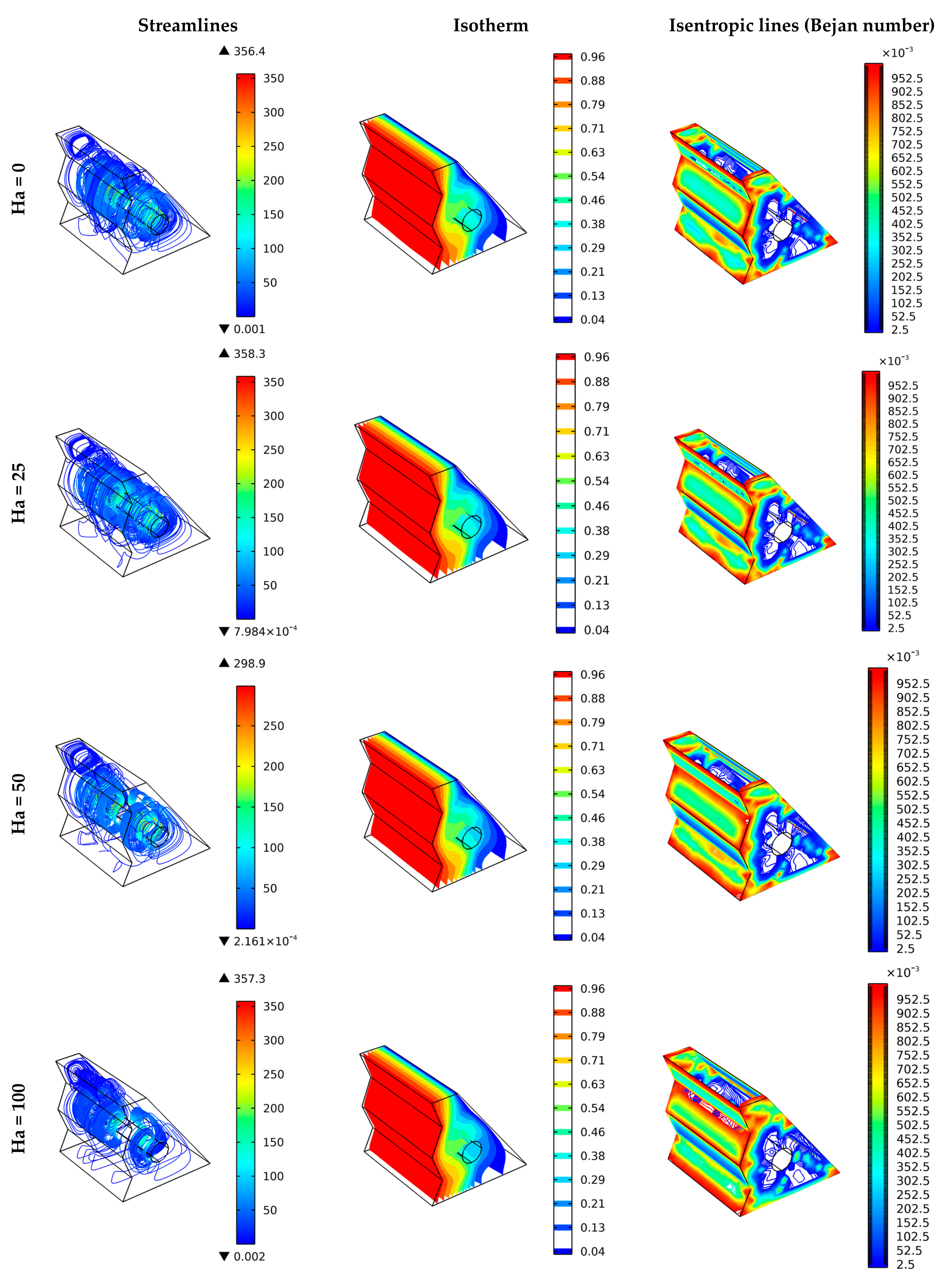 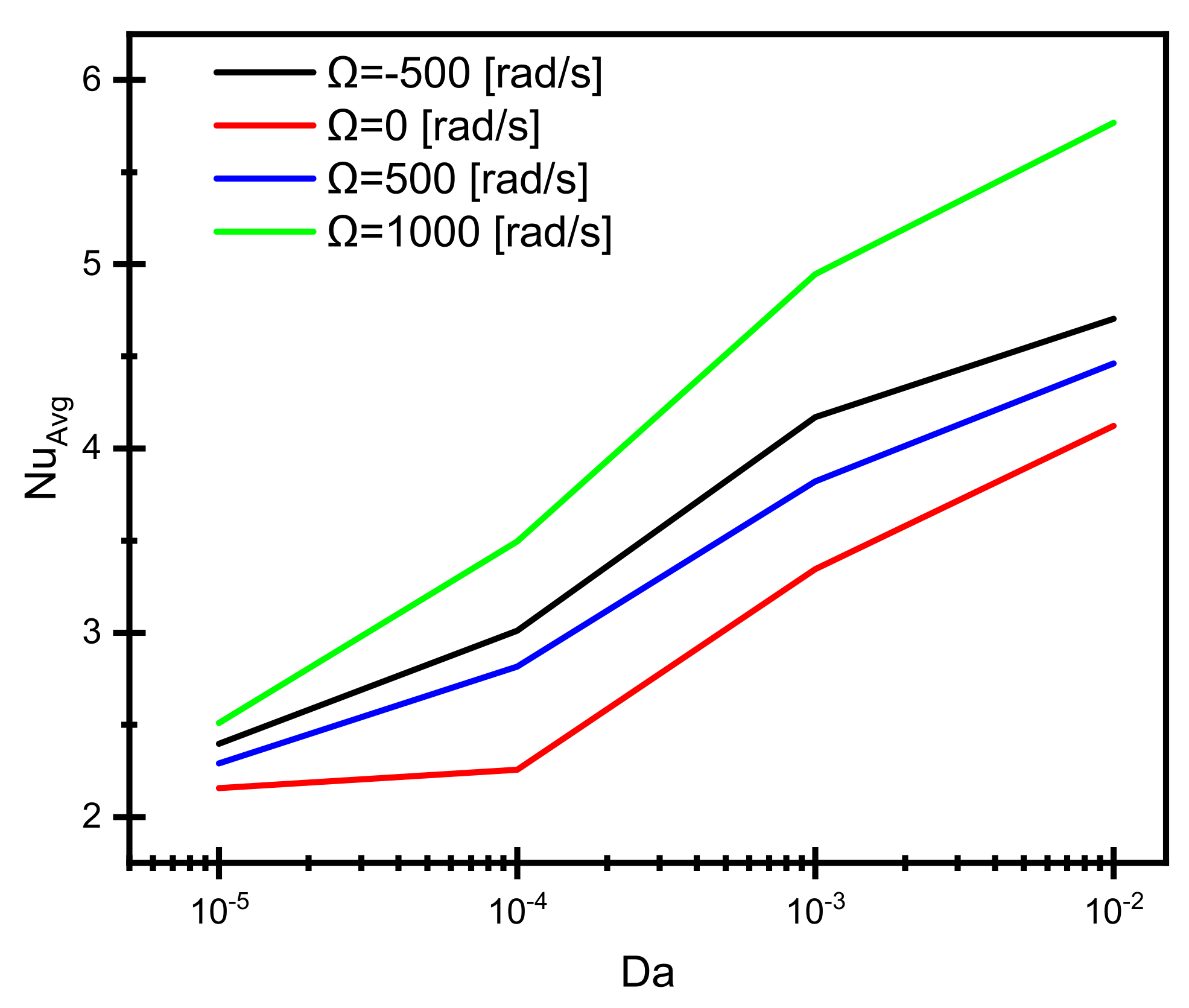 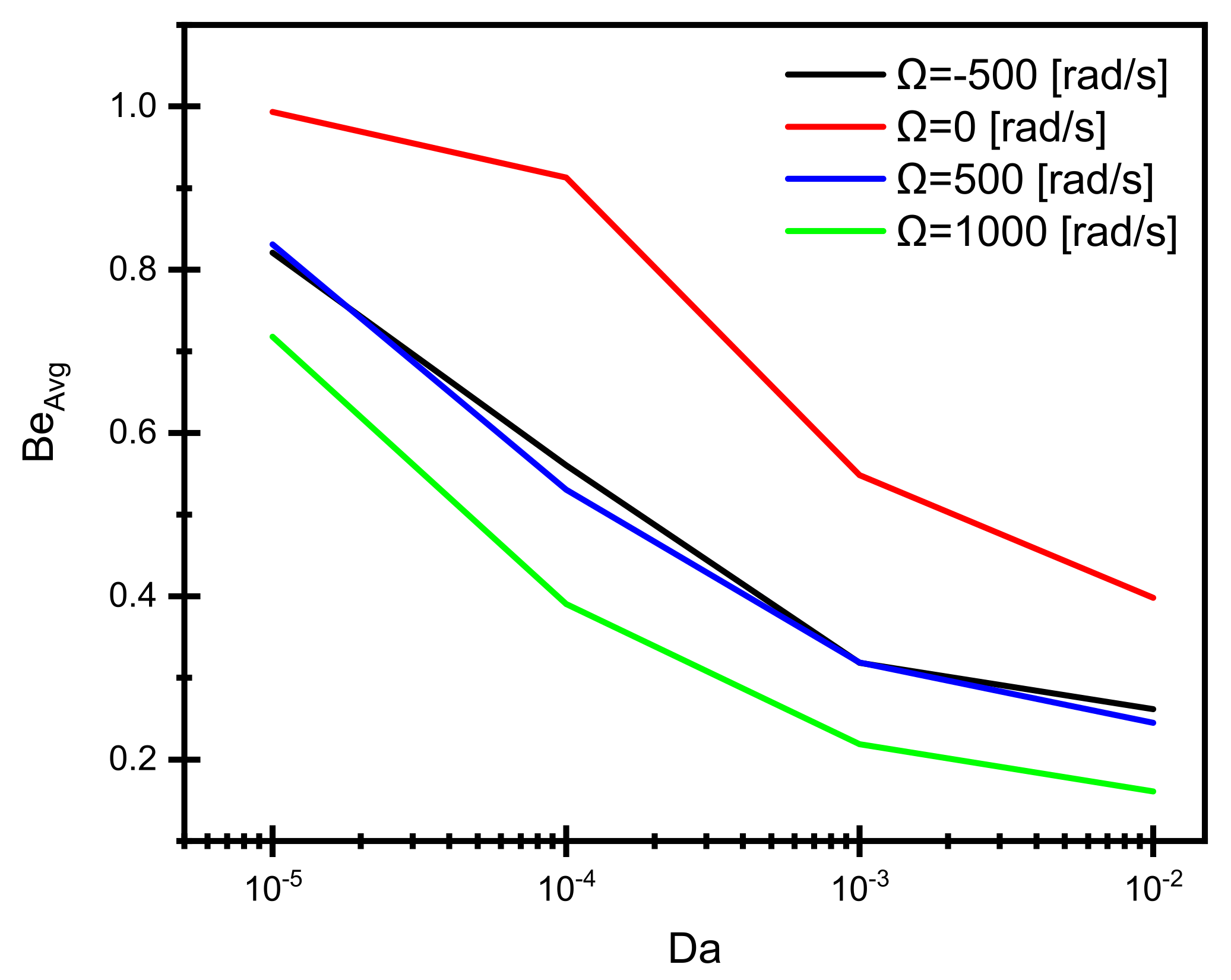 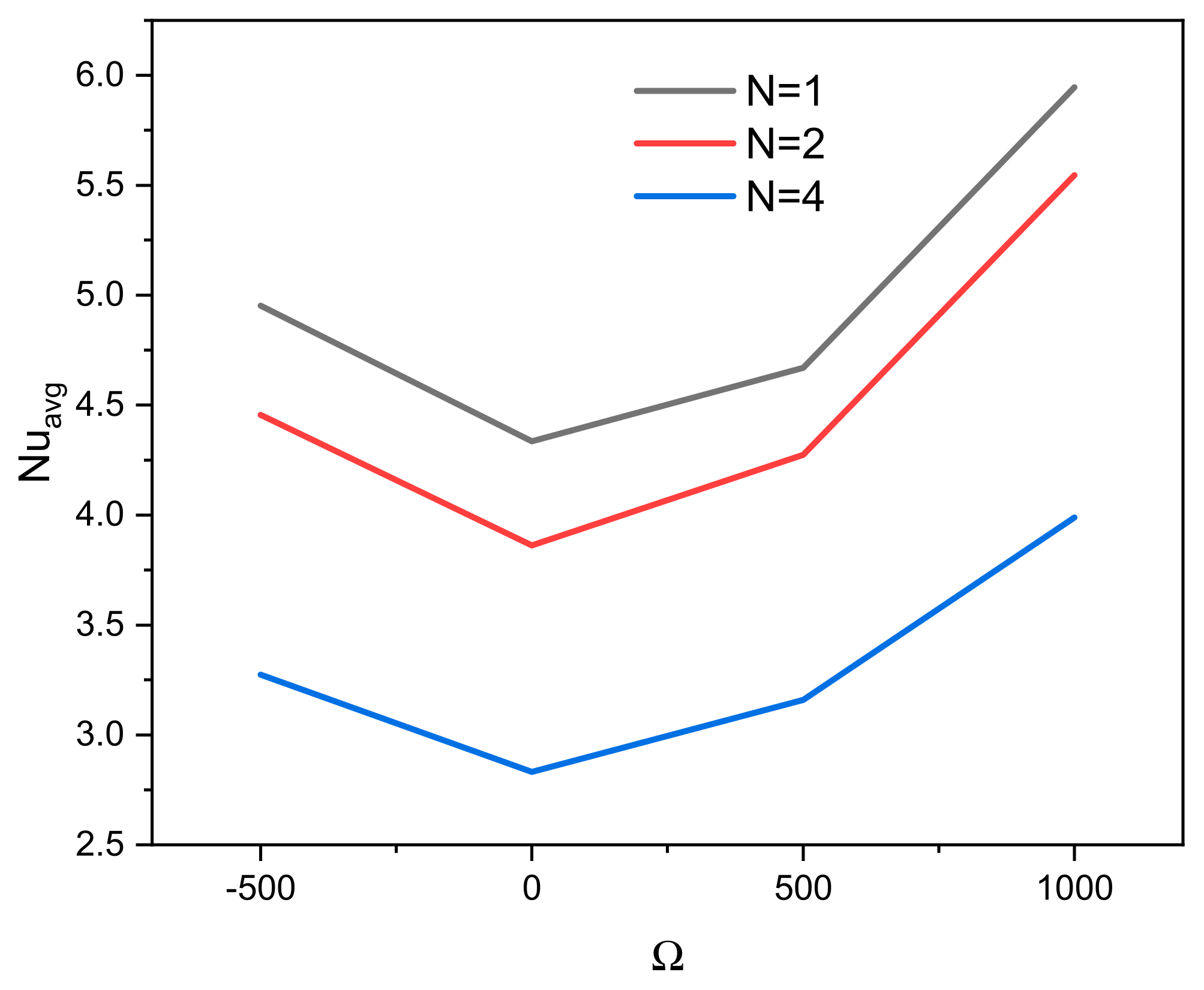 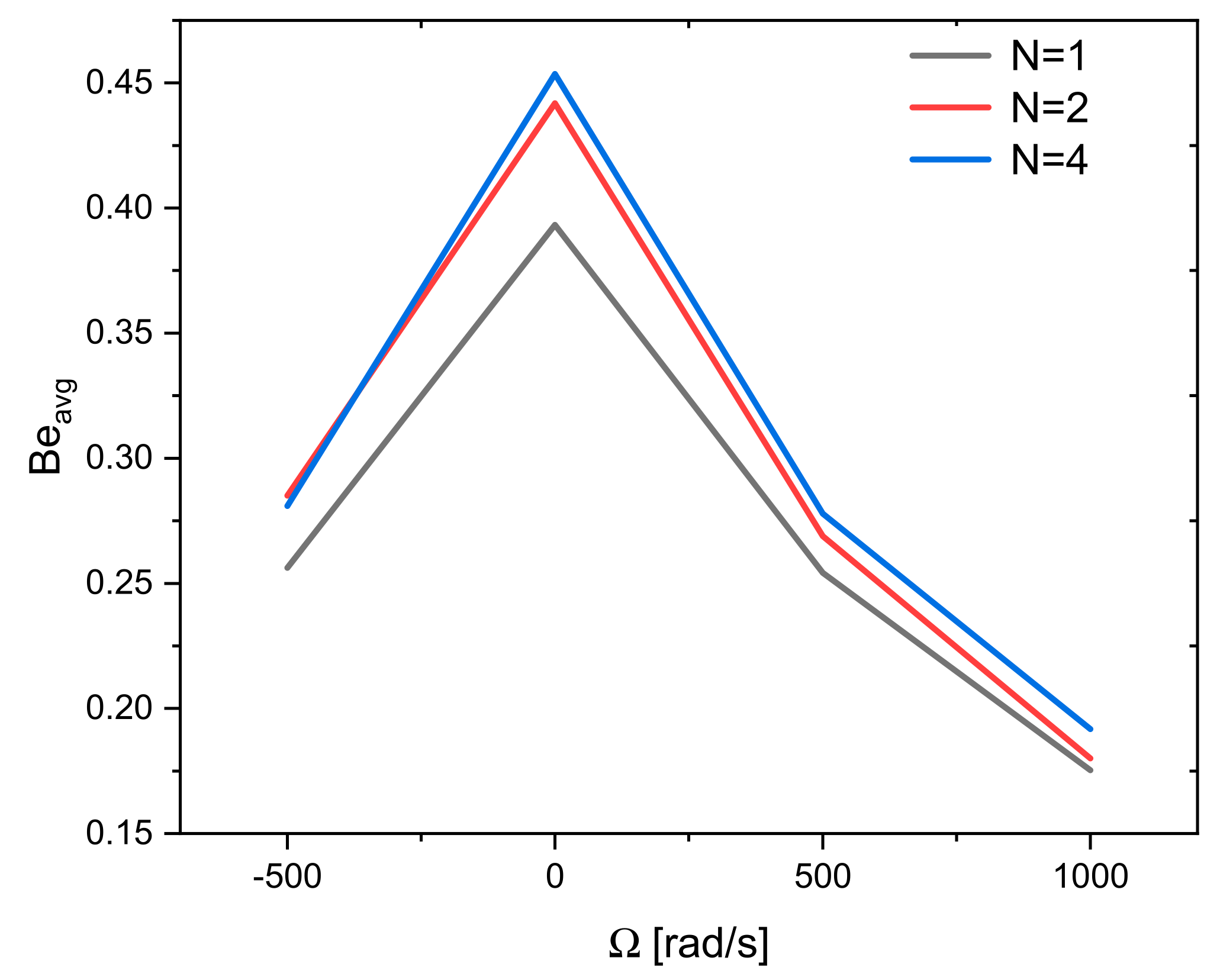