Nisin, an antibacterial compound produced by Lactococcus lactis strains, has been approved by the US Food and Drug Administration to be used as a safe food additive to control the growth of undesirable pathogenic bacteria. Nisin is commonly described as a pH-dependent primary metabolite since its production depends on growth and culture pH evolution. However, the relationships between bacteriocin synthesis (BT), biomass production (X), culture pH, and the consumption of the limiting nutrient (total nitrogen: TN) have not been described until now. Therefore, this study aims to develop a competitive four-dimensional Lotka–Volterra-like Equation (predator-prey system) to describe these complex relationships in three series of batch fermentations with L. lactis CECT 539 in diluted whey (DW)-based media. The developed four-dimensional predator-prey system accurately described each individual culture, providing a good description of the relationships between pH, TN, X, and BT, higher values for R2 and F-ratios, lower values (<10%) for the mean relative percentage deviation modulus, with bias and accuracy factor values approximately equal to one. The mathematical analysis of the developed equation showed the existence of one asymptotically stable equilibrium point, and the phase’s diagram obtained did not show the closed elliptic trajectories observed in biological predator-prey systems. View Full-Text
Keywords: nisin; asymptotically stable equilibrium point; batch fermentation; four-dimensional predator-prey system; mathematical analysis nisin; asymptotically stable equilibrium point; batch fermentation; four-dimensional predator-prey system; mathematical analysis
►▼ Show Figures 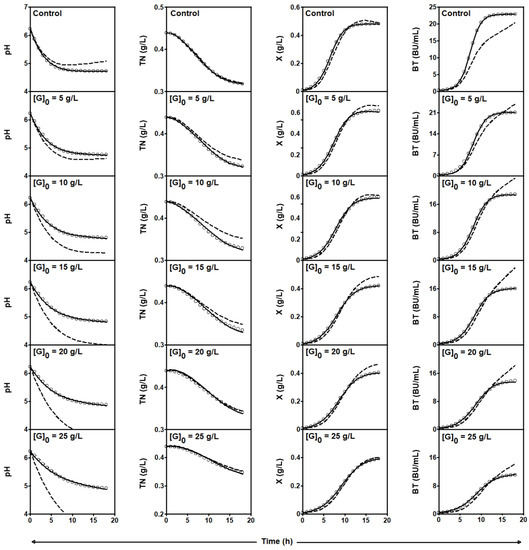